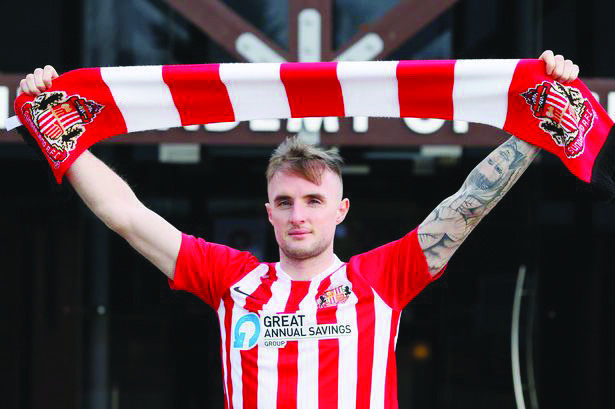 BEECHMOUNT man Carl Winchester has penned a two-and-a-half-year deal with Sunderland having completed his move from Forest Green Rovers earlier this week.

The 27-year-old midfielder joins the League One outfit where he will link up with Head Coach Lee Johnson once again having played under him when he first moved to England in 2010 at Oldham Athletic.

Winchester moved to Cheltenham Town in 2017 and then onto Forest Green where he served as club captain, but his performances caught the attention of Johnson once again who was prompted to make a move for the Belfast man who was only too happy to sign for the Black Cats.

“I’m buzzing; it’s a massive club and once I heard they were interested, there was only one place I wanted to come,” Winchester told Sunderland’s website.

“A couple of weeks ago, the club approached me and said there was interest from Sunderland, so I just said: ‘we need to get this done’. I’m thankful to Forest Green because they were brilliant with it, made it as easy as they could and didn’t stand in my way.

“He (Lee Johnson, head coach) called me and just told me this is a massive club, one I’m probably not used to. But he believes in me and I believe in myself. He just said to come in and he thinks I can help the team this season, so thankfully he brought me here.”

Having captained his previous two clubs, Winchester arrives at the Stadium of Light with leadership qualities in abundance.

He has vowed to give his all for his new club that sits in 10th place in League One but has aspirations for gaining promotion back into the Championship. There is still a long way to go in the season and former Willowbank man Winchester is hopeful he can play his part.

“I think it’s time for me to progress in my career,” he added.

“You just can’t turn down a team like Sunderland and I think I’m coming into my prime at 27 and 28 so I’m hoping I’ll settle in well with the lads, get to know them through training and just kick on from there.

“There are loads of games (left in the season) and I’m looking forward to them. In the lower leagues, the games come thick and fast so that’s something I’m used to. I’m just looking to try my best and help the team out.”

Pride
The news of Winchester’s move to Sunderland was greeted with pride at Willowbank, the club where his journey began as a juvenile.

Despite having played in England since 2010, the former ‘Bank man has never forgotten his roots and would be a regular around the club when he is back home in the off-season.

His former coach, Tommy McLarnon paid tribute to the midfielder and said that nobody deserves a move to a big club like Sunderland more than his former charge.

“He has earned it,” said Tommy.

“Sunderland is a huge club and the stadium holds around 49,000, which is massive compared to what he is used to at Oldham, Cheltenham and Forest Green. They are all great clubs, but the stature of Sunderland is much greater.

“When he is home in the off season, he would still be a regular around the club and would take a few sessions with the kids and be at senior training.

“All of those boys would look up to him too as he is over in England as a professional footballer, but still comes back to help out at the club. I think he has handed out medals at the club presentations for the last 10 years.”

Winchester comes from a family immersed in the game and has worked hard throughout his career to get where he is.

Despite having the status of a professional footballer, Winchester has never changed as a person and this grounded approach to life has helped him reach the levels of consistency on the pitch that caught the eye of Sunderland.

“He is just the same person as he has always been as a kid,” added Tommy.

“He would have a joke and sleg you a bit, but he doesn’t get above himself and never has, even though he has had the ability from no age.

“His wee brother (Ciaran) plays for our senior team and won the Junior Cup last year and other brother (Jude) is with Ballymena and was over with Kilmarnock, so football is in the family.

“He is so consistent and doesn’t ever seem to get injured. Once he gets into a team he tends to stay there and hopefully that will be the case at Sunderland. He is working with the same manager (Johnson) he had at Oldham who seems to like him so hopefully he can get into the team and show why they brought him in. He’s Championship level at least and hopefully he gets there with Sunderland.”

Hope
The hope for Sunderland and Winchester is that they can get back up to the Championship next season having been in the Premier League just four years ago.

There is no doubt the club has the facilities and fan-base to consider themselves a top club but results on the field over the last few seasons haven’t reflected that.

Instead, they have been forced to consolidate and build again, but their overall ambitions will be a return to the top-flight and Winchester is keen to play his part.

“I watched the Netflix documentary (Sunderland ‘Till I Die) when it came out and (saw) the whole size of the club - it’s huge,” he notes.

“They don’t deserve to be in League One or even the Championship. It’s a Premier League club so I’m proud to be here.

“As a player, everyone wants to play as high up as they can but here you have the facilities and everything in place for you to make it happen, so I will do my best to make that happen.”