A Friday night tour of the hotspots is really quite cool 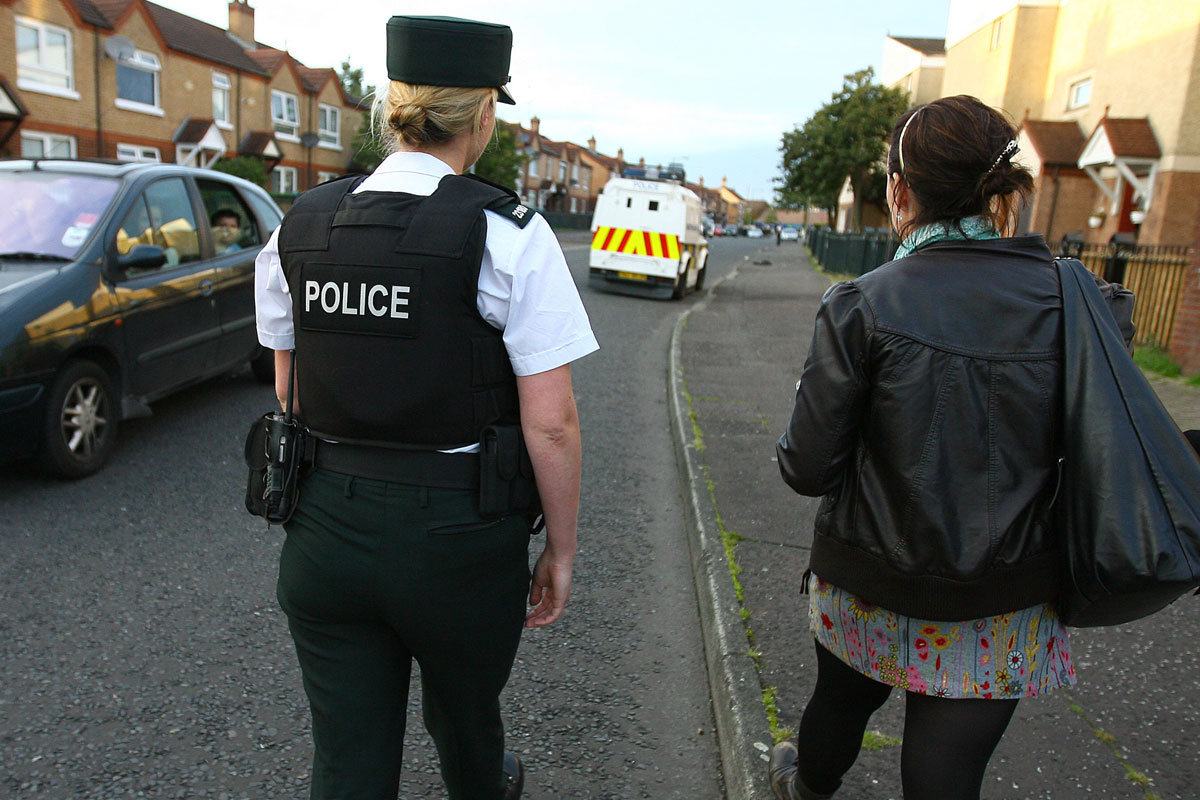 AS we prepared to leave Grosvenor Road police station at around 7pm last Friday night for a tour of West Belfast, I was offered the option of body armour, which hammered home to me the kind of threat that officers are under. I said no, but I gulped a little as I did.

We go through our lives ticking off that list of things we really want to do. Climbing into  the back of a police Land Rover on a Friday night is not something that’s on my list, you won’t be surprised to hear, but work is work, and so I dutifully clambered in and got seated. To tell you the truth it wasn’t that bad – not that I’d want to make it a regular occurrence, of course.

We were to start at Distillery Street and, together with a  representative from Belfast City Council, were to go on a tour taking in Divis, Ross Street, Clonard and Dunville, later finishing up in and around Ballymurphy and Springhill.

As we rumbled along, Sergeant Sam Wilson told me that relationships between the PSNI, the community and political representatives have improved immeasurably over recent years. Having been stationed at Grosvenor since 1982, he’s certainly in a position to know.

“The biggest problems that officers face are at interface and flashpoint areas,” he said. “We have had to deal with youths coming across the interfaces, stones being thrown at motorists and officers – but this is only on occasion. The former Mackies factory site is a problem area. It is a vast, open site and presents real difficulties, but we have had sterling involvement with community workers from both sides and we will continue to work with the community on ongoing issues.”

At least these days local people report problems to the police – that wasn’t the case up until relatively recently, but improved communication and increasing respect between residents and officers are starting to pay off locally.

“Anti-social behaviour in general is coming down,” adds Sergeant Wilson, “local people tell us that they don’t want to see on-street drinkers or be subjected to riotous behaviour any more. At the end of the day we are here to help and we’re all working towards the same end.”

It was around this stage that my decision to forego the body armour started to seem like a very good move. The heat inside the Land Rover was rocketing – and we had only been in there for around five minutes. At last I knew why the police take every opportunity they can to open those heavy doors just a little bit. We got out of the vehicle in Clonard and I fanned my face with my notebook and sucked in the fresh air

“It’s a big help for us to be seen out there in the community,” explained a local neighbourhood officer. “By walking the area you are assigned to, you get to talk to the kids and the young people – they aren’t all troublemakers, the vast majority of them are good kids. You have to deal with people as you find them. You need to get across to them that you are not just a bad guy in a green suit and cap. We try to build up that bit of confidence in the area.”

It became quickly clear that while police foot patrols may indeed be a good thing, they are by no means an integral part of community life in Clonard just yet. Perhaps it was the fact that a journalist and a City Council representative were in tow, but people just seemed to come out and stare. A little boy ran alongside us demanding to know what was going on. “We’re just having a walk through,” he was told. That didn’t seem to make sense to him – or to the many people who came to their doors and into their gardens to watch us pass. I asked the police about this and I was told that officers on foot patrol don’t walk regular routes – they vary their routine so as not to present an easy target for dissident republicans still intent on launching attacks. I thought about that body armour again.

The West Belfast PSNI Facebook page for the PSNI had informed the young people of the Falls that a “mystery guest” was along for the ride that night. The social networking site quickly hotted up with followers adding their tuppence-worth as to who it could be – Frank Mitchell, Alan Shearer, Martina Purdy, Stephen Nolan. Nobody plumped for Ciara Quinn. “Let’s just keep them guessing for another while,” laughed an officer as we moved through Divis Street.

I was told that the alleyway at the Maureen Sheehan Centre was a “hotspot” for anti-social behaviour and that officers make a pass here as often as they can to try and keep a lid on things, especially at the weekends. They don’t do it in the hot and noisy Land Rover. “Going about in one of our unmarked cars is a lot quieter for starters, the noise of a Land Rover can be heard instantly and the youths can hear you coming. Cars aren’t as obvious.”

Up at Iris Drive I was told a scrambler had been lifted and taken back to Grosvenor Road station. Meanwhile Facebook was speculating on whether the police’s mystery guest was Rupert Murdoch or Paddy the Traveller from Big Brother.

A quad was roaring around the Springhill estate, too fast and agile for the police to chase and catch. But an officer later spotted a 15-year-old he was sure had been the driver – or one of them at least. Quads and scramblers are a group activity among young people. The youth’s details were taken and he was allowed to go on his way in the knowledge that his parents would be receiving a follow-up visit.

I was told to be on my guard as an officer had had a microwave, of all things, thrown at him the week before. I thought about the body armour again, and about a helmet.

The issue of scramblers and quads is a real bugbear in this area and police, schools and community workers are liaising to battle the problem. Information mornings are taking place in local schools in an attempt to explain to children the dangers – and the headache they cause for their neighbours. I wondered whether information mornings advising parents not to buy them in the first place might be a good idea too.

It was dark now, time to head back to the station, time to climb back into that reinforced  oven that is a PSNI ‘Tangi’ Land Rover. In truth, things had been hotter inside the vehicle than they had been on the streets.