Adams to step down as Sinn Féin President 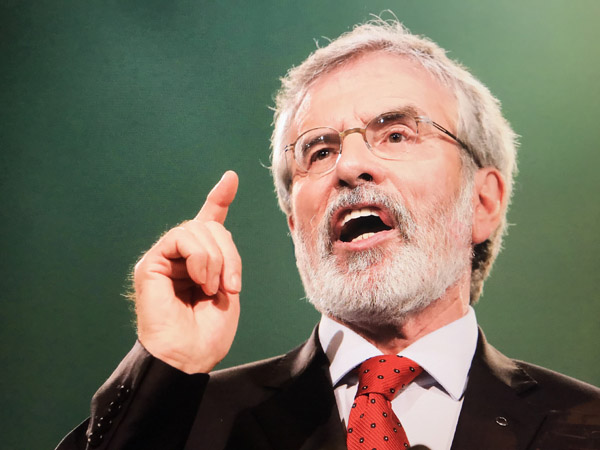 Gerry Adams has announced his intention to stand down as Sinn Féin president in 2018.

Mr Adams made the announcement at Sinn Féin's Ard Fheis in Dublin on Saturday night.

Speaking to a packed RDS arena in what was his last Ard Fheis as president he said he would be asking the incoming Ard Comhairle to agree a date in 2018 for a special Ard Fheis to elect a new leader.

Mr Adams said: “Republicanism has never been stronger. This is our time. We will grow even stronger in the future. But leadership means knowing when it is time for change. That time is now. I will not be standing for the Dáil in the next election. Neither will my friend and comrade Martin Ferris.

“I want to thank Martin, Marie and their clann for years of service to the Republic. This is also my last Ard Fheis as Uachtarán Shinn Féin. I will ask the incoming Ard Chomhairle to agree a date in 2018 for a special Ard Fheis to elect our next Uachtarán.

“I have always seen myself as a team player and a team builder. I have complete confidence in the leaders we elected this weekend and in the next generation of leaders.”

Mr Adams continued: “I want to thank everyone who has welcomed me into their homes and communities and who have made me part of countless campaigns, countless elections and countless negotiations.

“I want to especially thank the people of West Belfast, and the people of Louth, including Richard McAuley, for your unswerving support and solidarity, and your friendship. I firmly believe that one person can make a difference.

“The first step in making a difference is believing that you can be that person. One woman, one man, doing their best.

“That’s what it takes. You don’t have to do as much as Martin McGuinness did, but we all have to do our best – and we have to do it together. That is the key to our successes so far. Doing our best, moving forward, united, strong and together. Na habair é – dean é.”

Meanwhile, Sinn Féin leader in the north Michelle O’Neill has ruled herself out of the running to replace Gerry Adams as leader, speaking on the BBC1 Politics Show on Sunday, she said she already has “enough to do”.