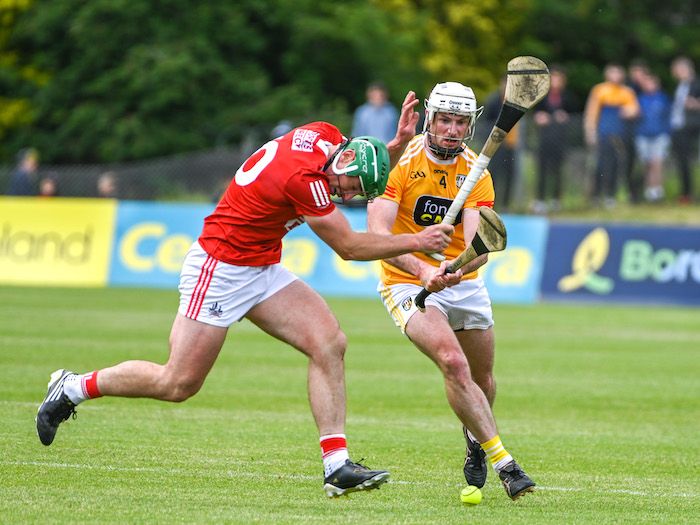 All-Ireland Senior Hurling Championship, preliminary quarter-final
Antrim 2-19 Cork 3-27
AS the players left the field at half-time at Corrigan Park this afternoon, those who weren't already on their feet were now.

Antrim led Cork by one in this All-Ireland Senior Hurling Championship tie having come through some difficult early moments and it was the Leesiders who were perhaps flattered by being just one adrift.

The Saffrons may have been rank outsiders to most outside of their dressing room before throw-in, but they tore into this game with ferocity and were full value for their lead.

In the build-up, a GAA press call had neglected to invite Antrim and McDonagh runners-up Kerry to send a representative for the launch of the race for Liam MacCarthy.

The whole episode screamed 'you don't belong here', but Darren Gleeson's men rammed that snub down throats and proved they are very much worth of their place at the top table and while eventually beaten, 1-2 in stoppage time from Cork with Antrim committed to attack put a false reading on this game and indeed, the Saffrons will have regrets from the game.

There was a shaky start where they gifted Cork two goals and 10 first-half wides that could have seen them turn the screw, but Kieran Kingston's men responded well after the break with Darragh Fitzgibbon - who finished with 1-4 -driving them on superbly from the middle to build a winning platform that left Antrim chasing it and exposed in the dying minutes.

There had been a suggestion Antrim had nothing to lose in this game, but this is an ambitious group who knew defeat would spell the end of their season and if anyone though those were just empty sentiments, they were left I no doubt at the break as Antrim looked like a team on a mission, but couldn't find the reserves to pull it off in the second period and at times, the breaks just didn't go their way.

Robbie O'Flynn hit six from play for the Rebels and Seamus Harnedy bagged 1-3 after the break to compliment top-scorer Conor Lehane with 1-8.

Antrim had their own stars with James McNaughton having stormer, as did Keelan Molloy with 1-3 from midfield, but they just couldn't reach the same heights as the first half as Cork managed the game down the stretch to advance.

"We played really well all year into the breeze and the games we struggled in was using the wind," Antrim manager Darren Gleeson said.

"Again today, there were 10 wides in the first half and we are disappointed with that. Handling errors saw us hand over two goals, so simple things and fine margins playing at the highest level that cost you.

"Going in a point up at half-time should have been more and we needed that to carry us through. They got meaningful scores after half-time - out-scoring us three or four to one - and we were out on our feet there with five or six minutes to go as it was a big effort over seven days. But they stuck to the task and there's a huge amount to build on there for Antrim hurling."

While Seaan Elliott nudged Antrim into an early lead in front of the sold-out crowd, Cork had goal on mind for the off and five minutes in they got in when Tim O'Mahony pounced on a drop by Conal Cunning to make a beeline towards and his pass inside went all the way through to Darragh Fitzgibbon to finish.

Antrim were not fazed by this and hit back in kind shortly after as Ryan Elliott's long puc-out was fetched by James McNaughton who raced in and blasted beyond Patrick Collins.

Cork were keen to put their stamp on this game and straight away, O'Mahony again found himself through with David Kearney healing him back outside the area with a goal chance deemed to have been prevented as referee Liam Gordon awarded a penalty, but only yellow to Kearney, with Conor Lehan despatching to the net.

Antrim were looking a little shaky in defence and while Robbie O'Flynn clipped over the first of his four first-half points, the Saffrons grew into the gamer with McNaughton leading the way superbly although Elliott had to be alert to deny Lehane a goal with a save out for a 65 that was converted by the Midleton man.

On 23 minutes the hosts roared right back into this game with Michael Bradley feeding Keelan Molloy who stepped inside to find the net and put the hosts just one off the visitors, and they began to exert control with Neil McManus clipping over a sideline, yet chances went a begging in the swirling wind that was sending shots off to the right.

Still, they were growing in confidence with the home crowd finding its voice as McNaughton, Molloy, Cunning and Paddy Burke found their range to edge the hosts ahead.

A pair of O'Flynn scores tipped the balance back Cork's way, but Antri finished the half well as Molloy levelled and McNaughton landed a free to put them 2-11 to 2-10 ahead.

The hosts just couldn't hit the same heights in the second period despite Keelan Molloy scoring a beauty on the run after Seamus Harnedy pointed for Cork within seconds, as Darren Gleeson's charges were to mainly rely on James McNaughton frees as Cork began to pull clear with Darragh Fitzgibbon exerting a greater control on this game as the minutes ticked by, clipping four points and having a hand in many more.

Lehane, O'Flynn, Harnedy kept the board ticking, while at the other end, Cork kept the door shut as Antrim just didn't have the same room.

The hosts were just six adrift as the game moved into stoppage time, but Fitzgibbon and a second point from Patrick Horgan off the bench made it safe, while the coup de grace came with the last play as Jack O'Connor made a great run along the left and played inside to Harnedy who wrapped up the victory for the Rebels who now face Galway in next week's quarter-final.

"We lost the middle third in the first half but we got control in the second half," said Cork manager Kieran Kingston.

"People might think we were complacent coming in and took Antrim for granted, but that couldn't be further from the truth.

"We knew coming up here the history of results between Antrim and Cork over the years here and their results here in League and Championship.

"I spoke to the lads about that leading into the game and I have spent a lot of time here, up in Cushendall, so I'm well aware about Antrim hurling.

"Maybe in the first 20 minutes, the lads didn't believe me and were a bit complacent, the decision-making was poor, going for goals when points were on and that cost us.

"We weren't in control of the game, but happy where we were at half-time."