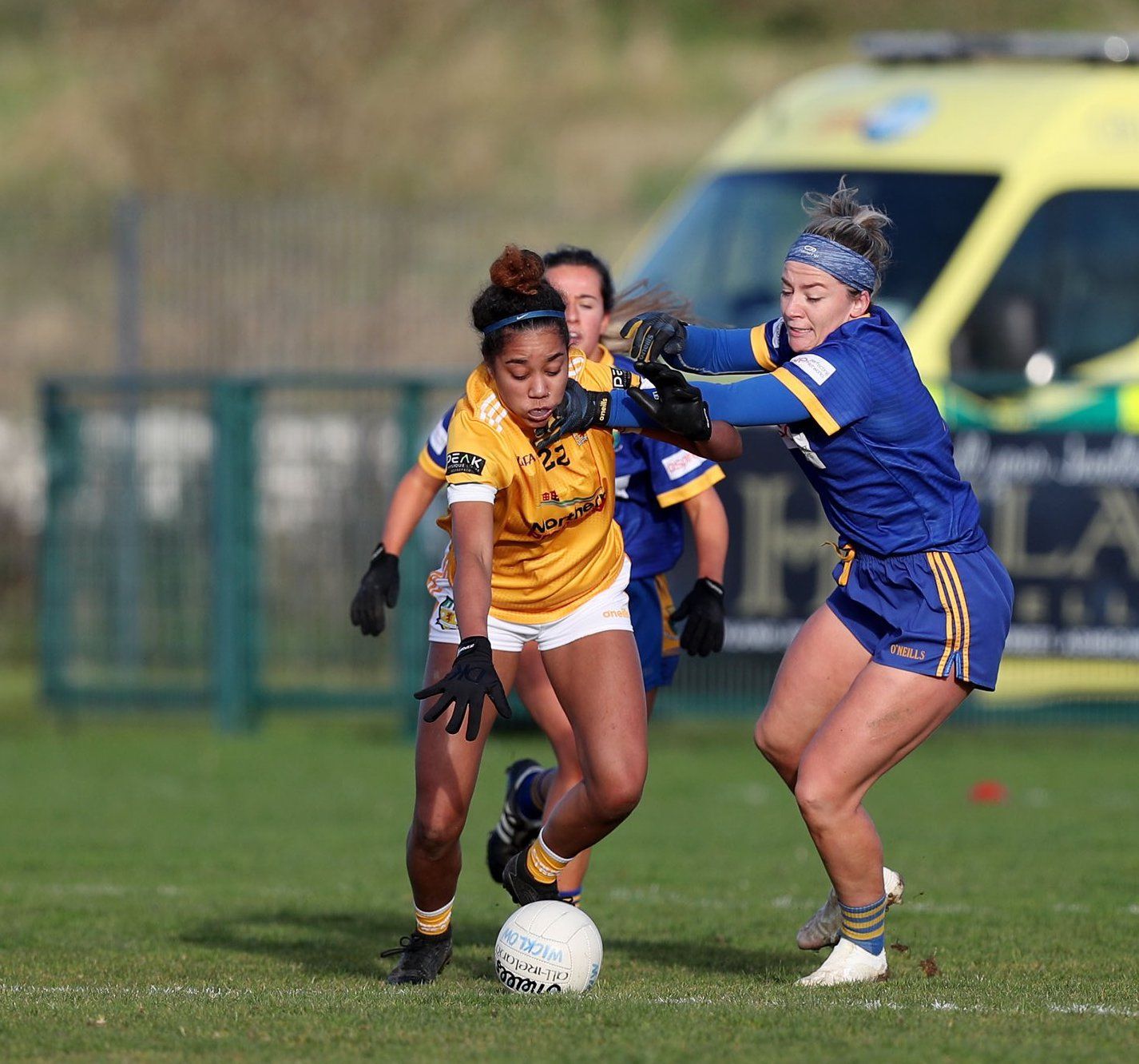 Three goals at the end of the first half were crucial in sending Wicklow on their way to final of the TG4 All-Ireland Junior Ladies Championship after a 7-11 to 3-10 win over Antrim in Ashbourne yesterday afternoon.

Meadhbh Deeney’s early strike had Wicklow in the ascendancy but Antrim weren’t deterred until late in the first half when a blitz of goals from Clodagh Fox, Deeney and Marie Kealy floored them.

Cathy Carey thought she had given her side a glimmer of hope with a goal 10 minutes after the restart but Kealy and Fox added further majors for Wicklow.

To their credit, the Saffrons refused to roll over and hit the net twice before the games conclusion through Aoife Taggart and Bronagh Devlin, but in the end it was scant consolation as Wicklow advanced to the All-Ireland decider in a few weeks’ time.

Wicklow made the ideal start and found the net within three minutes and it was a well worked move through the hands as Clodagh Fox who passed the ball to captain Laura Hogan who spotted Meadhbh Deeney on the outside and Deeney slotted into the corner of the net.

Lara Dahunsi replied for Antrim at the other end but Laura Hogan combined with Marie Kealy for point to re-establish the goal lead.

Antrim continued to work hard and found their second point of the afternoon through a converted Aoife Taggart free.

However, goalscorer Deeney popped over her first of the afternoon and Marie Kealy converted a free to give her side a 1-3 to 0-2 lead.

Cathy Carey dragged Antrim back into proceedings with two tremendous points from range to make it a two-point game once again.

Wicklow should have been further ahead but their shot selection was rather wayward and eventually Sarah Miley got her angles spot on to make a one goal game with half-time looming.

The pre-game favourites showed why they were considered favourites for the competition with a three-goal blitz before the break.

Alanna Conroy did well to snuff out an Antrim sideline ball in Wicklow territory and began a counter-attack which saw Meadhbh Deeney slip the ball into corner-forward Clodagh Fox for a simple goal to make it 2-4 to 0-4.

Hungry for more, a third goal arrived on the stroke of half-time as Hogan switched the play to Sarah Miley who in turn fed Meadhbh Deeney for a second goal of the half.

Meadbh McCurdy pulled a score back after a quick switch with Lara Dahunsi but there was still time for Wicklow to score their fourth goal before the break.

Laurie Ahern burst up the field and popped the ball inside to Meadhbh Deeney; Deeney picked out her captain Laura Hogan whose shot looped over Anna McCann and appeared to have helped to the net by Marie Kealy to ensure their side were 4-4 to 0-5 ahead at the interval.

Wicklow stretched their lead after the restart with Laura Hogan producing a marvellous score and Kealy and Deeney chipping in minutes later.

Grainne McLoughlin hit back for Antrim after some good play from Nicole Jones but Sarah Miley responded at the other end.

The Saffrons were in need of some goals if they had any aspirations of mounting a comeback and they were offered a brief glimmer of hope when Grainne McLoughlin picked up possession, played a one-two and guided the ball into the path of Cathy Carey who shot low to the net to make it 4-8 to 1-6.

Their hopes were extinguished within the space of 60 seconds as Laura Hogan drove forward and picked out Marie Kealy for the corner-forward's second goal of the afternoon.

The duo linked up again a few minutes later as Kealy added a point to her tally and midway through the second-half Wicklow had goal number six.

Hogan was involved for the fourth time in one of her side's goals as she slipped the ball to Clodagh Fox who picked her spot in the net to make it 6-9 to 1-6.

Antrim only had pride to play for the in the final third of proceedings and to their credit they continued to battle.

Wicklow midfielder Aoife Gorman was sin-binned for a pull back and Antrim had a numerical advantage.

They made the most of it within less than a minute as Lara Dahunsi slipped the ball to Aoife Taggart and the Aldergrove player struck low to the net.

A period of pressure in the aftermath couldn’t yield any further scores and Wicklow struck goal number seven with six minutes remaining.

Marie Kealy unselfishly slipped the ball to opposite corner-forward Clodagh Fox for Fox’s third goal of the game.

Cathy Carey converted a free in response and Lara Dahunsi was on target for her second point of the contest shortly after.

On 57 minutes, substitutes Naoise Burns and Bronagh Devlin combined with Devlin sending the ball to the net to make it 7-9 to 3-8.

The last four scores of the game were equally shared between the sides as Marie Kealy hit her side's final two scores - one from the play and the other from a free - to bring her personal tally to 2-6.

Cathy Carey topped scored for Antrim with 1-4, her final point coming from her second converted free of the afternoon with Lara Dahunsi claiming her third of the contest at the death. These were mere consolation as Wicklow ran out winners to take their place in the decider with Fermanagh at Parnell Park next month.