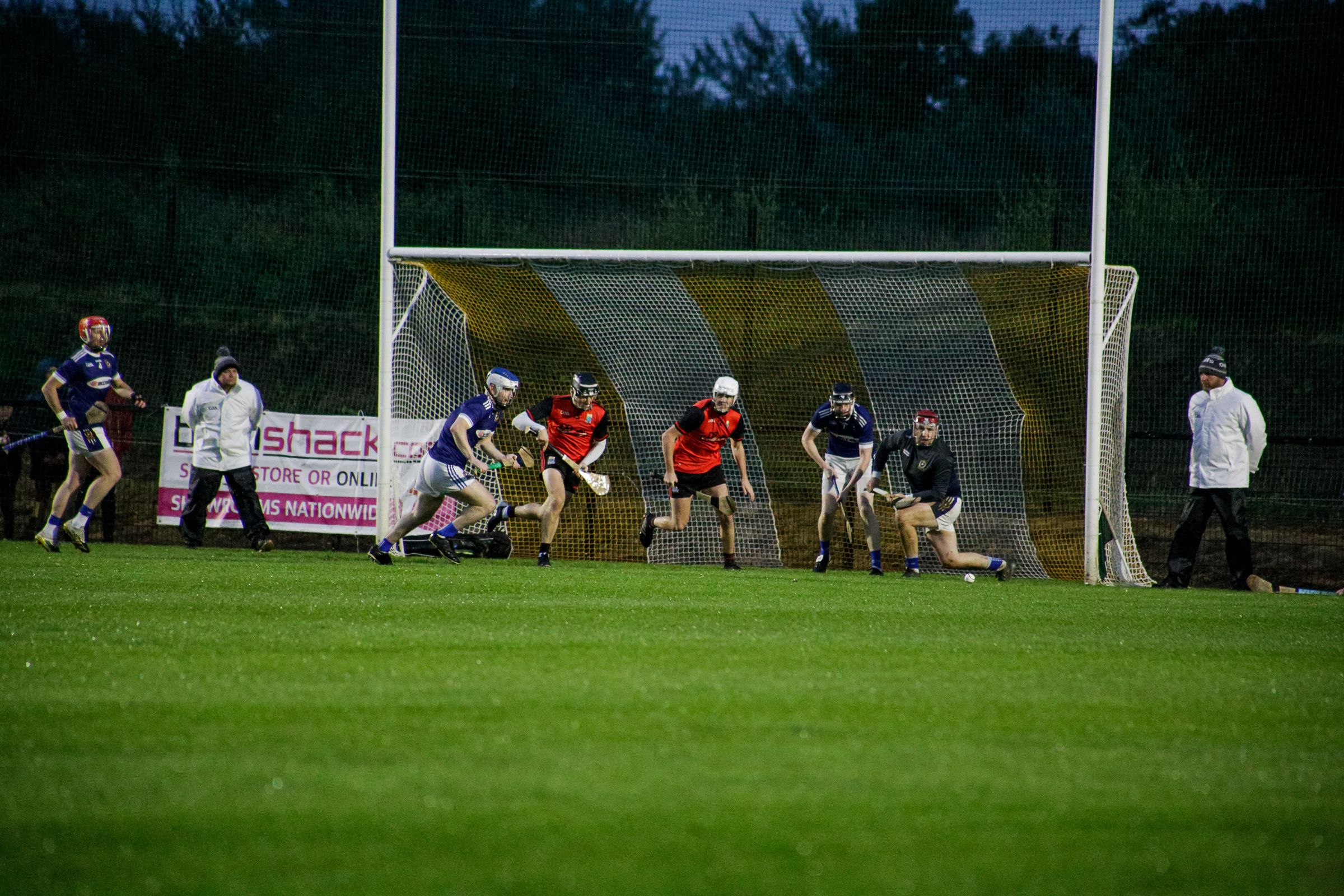 GOALS win games and two in each half helped Clooney Gaels romp into the Antrim Intermediate Hurling Championship final at the expense of St Gall's at Dunsilly on Friday night.

PJ O'Connell netted twice in a first half that was played out in torrential rain - the second of those that he may not have known a lot about - but Donal Graham's 41st-minute major put this game beyond the city side with a rather fortuitous fourth putting a further gloss on the final score.

There was no doubt the Clooney men were worthy winners and they handled the putrid conditions so much better. Their striking, touch and handling were on point despite the elements making it an extremely difficult task as they led by eight at the break and powered home in the second half as the evening became a lot drier.

St Gall's will reflect on a couple of goal chances that weren't converted with both shots that seemed certain to hit the net deflected out. Had they gone in then who knows how this game would have panned out, but there was never any threat of a comeback in the second period as they made little to no headway going forward and Clooney proved their class to pull further clear and advance into the decider.

"It was a fantastic performance by the lads, especially in the first half with the weather we had," said their manager, Hugh Dobbin.

"The goals came at the right times. We work hard on that in training as goals win matches and again, that proved the point tonight.

"We have a very strong panel and bringing on fresh legs can do the job as well as the boys we take off.

"We've only won a semi-final so we've a final to contest now, but we've been working hard for the past five years (to win the championship) and fingers crossed we do it this time."

The city side actually made a bright start with Tomás O'Ciarain sending a great ball downtime line to Mark Napier who steadied and scored from a difficult angle.

Yet Clooney were quick to settle and PJ O'Connell had his first sight of goal when played in, but Kurtis McGreevy did brilliantly to smother his effort with the downpour into his face.

The points did begin to flow with Neil O'Connell, Patrick Graham and Eamonn Brady all finding their range.

St Gall's then had their first big goal chance as Jackson McGreevy let fly with a rasping shot that came off a Clooney defender and flew out for a 65 McGreevy converted.

Points from Donal Graham and James O'Connell would then follow at the other end as St Gall's were dealt a major blow with O'Ciarain hobbling out with a hamstring injury and although McGreevy converted a free, the first goal came on 16 minutes as the greasy ball broke favourably from a ruck to PJ O'Connell who showed excellent composure to bat past Kurtis McGreevy from a narrow angle.

The city side responded well from this blow as Marcus Donnelly and Jackson McGreevy thumped over points, but after an exchange of frees from Fionnbar O'Neill and Napier came a hammer blow.

A long ball downfield appeared to have been dealt well by Kurtis McGreevy who came off his line and batted clear, but the ball ricocheted off O'Connell and ended up in the net.

Points from Neil and James O'Connell would follow with St Gall's coming up empty-handed from another goal chance as Gregory McGreevy's shot was deflected out for a 65 that came to nothing as Clooney took a 2-8 to 0-6 lead into the half.

Thankfully, the rain subsided at the break but this did little to help the St Gall's cause as Patrick Graham extended the Clooney lead within a minute and while the West Belfast men got on the front foot for a spell, the scores didn't follow with Mark Napier finally extending their tally on 40 minutes after James O'Connell had tapped over a free.

One minute later and it was game over as an excellent ball inside found Patrick Graham who squared to Donal Graham and from point-blank range, he gave McGreevy no chance.

PJ and James O'Connell added points and then on 51 minutes a long free from Fionnbar O'Neill dropped through a ruck of players and past McGreevy to end up in the net.

Marcus Donnelly and Patrick Friel did tag on points either side of a brace from PJ O'Connell as both sides ran their bench.

Clooney substitute Colla McDonnell was denied a fifth goal by the post, but scores from James and Neil O'Connell wrapped up a fine evening for the Clooney men and a disappointing one for St Gall's.

"The first half was nip and tuck, but they got two goals and we had one deflected out for a 65 and another where the goalkeeper makes a great save," said a disappointed St Gall's manager Chris Dornan who felt the loss of O'Ciaran on top of the absences of Joe McDaniels and Dubhaltach Wilson made his side's task all the more difficult.

"We went in eight points down that maybe was an unfair reflection, but just didn't come out in the second half.

"We've a youngish team and they (Clooney) have been together for a few years and we'll learn a lot from that.

"I thought our two inside boys (corner backs) did well on the O'Connells as James and PJ are top-quality hurlers but it was further out the field where the problems were. If you give them too much time and space they will punish you and we did, so it's a learning curve for us."