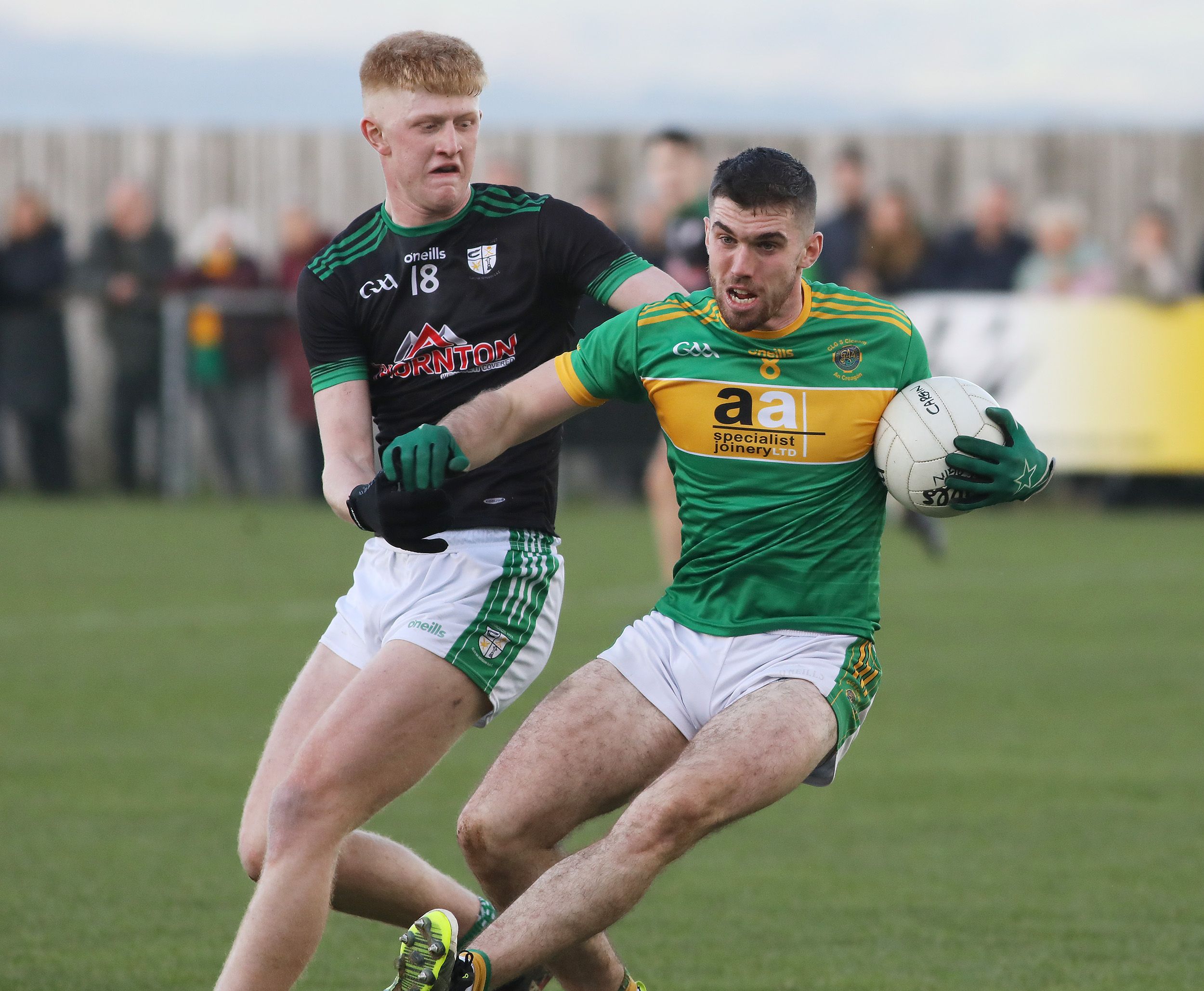 Few teams other than Lámh Dhearg have pushed Cargin as close in recent seasons.
The Kickhams were denied by their neighbours in the 2018 final and again last year after extra-time.

When Darren McKeown blew his full-time whistle, the outpouring of relief from the Creggan faithful was palpable. Defeats make the victories even sweeter.

Yet, few who were at Hightown one week ago would have predicted Cargin’s four in-a-row bid terminating at the semi-final stage.

The Toome outfit were ruthless and clinical when beating St Gall’s by 18 points last Saturday. The following day, the Kickhams beat St John’s by three, but Oisin Kerr’s point-black save from Conor Johnston stopped the game going to extra-time.

Creggan needed a huge improvement in their performance if they were to topple the defending champions, but to a man they upped the ante when it mattered most.

If wasn’t all plan sailing for Creggan, however as Cargin hit them for 1-2 inside the opening five minutes with Pat Shivers finding the back of the net for Erin’s Own.

A Tomás McCann major immediately after the first half water break threatened to turn Sunday’s semi-final into another Cargin procession.

As underdogs, it seemed crucial that the Kickhams got off to a good start. As it transpired, they couldn’t have envisaged a much worse one as Cargin had posted 1-2 inside five minutes while Creggan’s first points didn’t arrive until nine minutes into the game.

McCann opened the scoring with a fine point before playing a part in his side’s first goal when playing a great pass inside to Jamie Gribbin, who linked up with Paudie McLaughlin, who in turn set up Shivers for a well-taken goal.

When McCann stroked over a free moments later, Cargin were five up and things were already looking ominous for the Kickhams.

By the water break, Creggan had cut the lead back to two following frees from Ruairi and Jamie McCann.

Yet, they were rattled by the concession of another goal as Mark Kelly cut inside Aidan Maguire to set up Tomás McCann, who slid the ball low past Oisin Kerr to move Cargin 2-2 to 0-3 ahead.

Johnston hit a stunning long-range point for Creggan, but Cargin’s Ciaran Bradley replied in kind with a superb effort.

Crucially for Creggan, they managed to land the final score of the half as the excellent Conor McCann scored an inspirational point for his side in stoppage time to reduce Cargin’s advantage to four at 2-5 to 0-7.

Remarkably, the county champions only tagged on two points in the second half. While the low winter sun certainly didn’t help Damian Cassidy’s side, Creggan’s defensive effort intensified after the break.

McNulty’s men were faster out of the traps in the second period and back-to-back points from Ruairi McCann (free) and Jamie McCann left two between the sides.

A foul on Michael McCann led to another conversion for Shivers on 38 minutes, but the Toome outfit were finding scores hard to come by with Creggan pressing high up the pitch and not affording their rivals any time on the ball.

The introduction of the imposing Kevin Rice aided Creggan’s cause as well and he was on target to land his side’s tenth point of the game.

Midway through the half, Creggan had levelled proceedings with scores from Jamie McCann (free) and Kevin Small.

The question was now could they go on and win the game? They squandered two chances to take the lead with Ruairi McCann and McAteer fired wide and Cargin took full advantage when Tomás McCann knocked over a free after drawing a foul from Ricky Johnston.

With 10 minutes remaining, the sides were level again when Rice was fouled and Jamie McCann levelled before Ruairi McCann moved his side into the lead for the first time.

The Antrim ace held his nerve moments later when he moved Creggan two clear by converting a pressure free right in front of the Cargin dugout.

Cargin’s luck seemed to dessert them in the closing stages and McCann lost his footing when taking a free in the final minute of normal time.

Creggan, in contrast, could do no wrong. When substitute Kealan McCann fed the ball to Ruairi McCann, a shot at the posts seemed like the wrong option as he was off balance. The game was already deep into injury-time, but as long as the ball went dead, it would kill a bit of time.
McCann’s shot hung in the air before creeping between the posts to give Creggan a three-point lead.

Cargin would need a goal to force extra-time, but a late punt into the danger area from Mick McCann came to nothing as the Kickhams held on to claim a deserved victory and they’ll take on Aghagallon in a novel county final on Sunday, November 14.