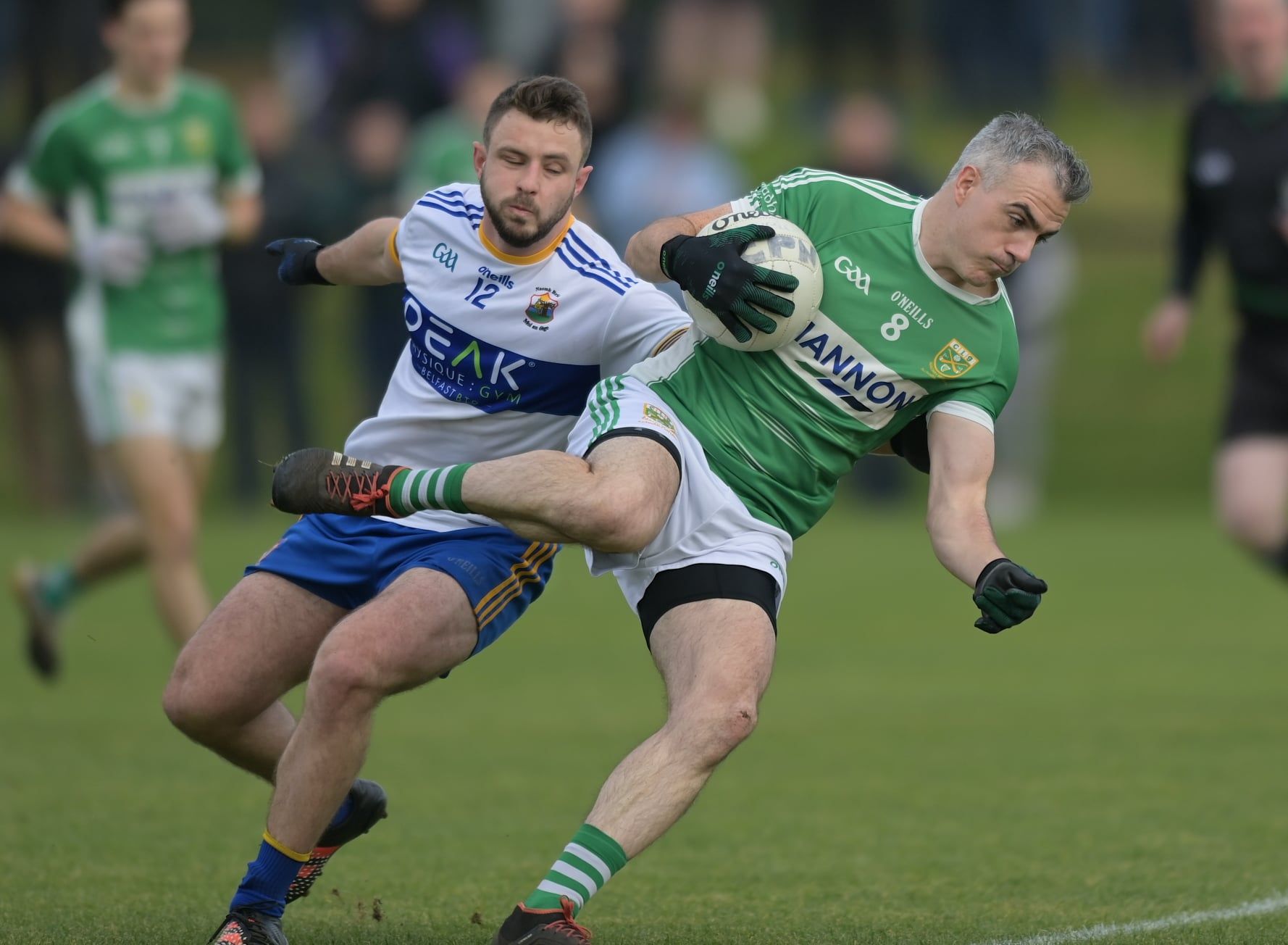 THE old adage that goals win games rang true once again at Dunsilly on Saturday as Aghagallon got two of them in the second half that ultimately decided this Antrim Senior Football Championship quarter-final against St Brigid's.

Ruairi McCann palmed to the net just 30 seconds after the restart and then Eunan Walsh hammered home a second six minutes from time that proved the crucial blow with St Brigid's just one adrift.

That second major was a fair reward for Walsh who was full of running in the game and was a contender for man-of-the-match alongside Peter Webb for the South Belfast men who was in excellent form.

While the Biddies played some good football, their lack of a goal threat was ultimately costly as they just didn't seem likely to bag the majors later on that they needed despite dominating possession for long stages.

However, the city side never led in this contest and when Aghagallon needed big scores, they invariably found them and on that basis, were value for their win.

"There were big moments in the game and our lads stuck in and got the scores when they needed to and that was the difference," said Aghagallon manager Kevin Murray.

"We saw it out at the end there so I'm happy enough. We are where we want to be at this stage in the final four."

Playing with a strong wind behind them in the opening period, it was no surprise to see Aghagallon on the front foot early and the strength of that wind was evident early when Darryl McAlernon let fly with a shot from deep three minute in that easily carried over.

Jack Lenehan doubled their money with a fine score on the turn before St Brigid's got off the mark as they worked the ball out to Webb whose shot into the teeth of the wind had enough purchase to make it over.

Gareth Magee responded before Webb was at it again, finishing a patient move and then thumped over a beauty from the right to leave the sides level at the water break.

It remained nip and tuck in the second quarter with McAlernon and Webb trading points before Aghagallon decided to go a bit more direct with an early ball into Magee who applied the finish.

James Smith responded at the other end and while Aghagallon found scores from Magee and Ruairi McCann, it was St Brigid's with the final say of the half as Conor McAleer kicked a wonderful score from a difficult angle to leave his side just 0-7 to 0-6 adrift at the break.

Trailing by just one with the conditions in their favour for the second half would have left the St Brigid's support very optimistic at this stage, but the second half couldn't have begun any worse for them as from the throw-in, Aghagallon went raiding with Marc McAfee allowed to gather on the left of goal and play a high pass across goal where McCann read the situation and followed in to rise high and palm home.

To their credit, St Brigid's hit back with Paul Bradley hitting the first of his three second half points and while Jack Lenehan pushed the St Mary's lead back out to four, the South Belfast men began to dominate the game.

They seemed to be either winning cleanly or mopping up all the breaks around the middle as they drove forward, retaining possession well as Aghagallon got back in numbers as they began to eat into the lead with Webb kicking a free and then adding another from play to leave two between them.

Aghagallon did look to have a much greater goal threat and almost had a second when Gareth Magee found himself in, but his shot was saved by the legs of Declan Heery as St Brigid's broke forward and after another phase of possession, worked the ball into Bradley to score and leave his side just 1-8 to 0-10 behind heading into the final quarter.

It was imperative St Brigid's got back on terms, but despite seeming to own the ball at times, there was just no end product as they couldn't get the score that may have changed the dynamic of this game.

Instead, it was Aghagallon who got that all-important score through Magee and while St Brigid's were again camped inside the St Mary's half after, they just couldn't engineer the scores with Aghagallon breaking from a free out on 54 minutes with Walsh racing clear and as he bore towards goal, swapped passes with McCann before lashing to the net that was then game breaker.

All St Brigid's could muster late on was a third Bradley point, but it was Aghagallon who had the final say as Magee clipped over a free to seal victory and a place in next week's semi-final.

"We met at the start of the year and our objective was to win our group, which we did," rejected a disappointed St Brigid's manager, Anthony McGrath.

"This is an ambitious group so we're gutted because we left that game behind us. To concede two goals in the manner we conceded them is a difficult one, but it's a learning curve for our boys.

"It was a swirling wind and they got bodies back, so it wasn't as advantageous a wind as we maybe thought at half-time, but the goals went against us and we had to change our game-plan. The first goal was a killer as it was such a soft one and the second was against the run of play which is hard to take.

"Aghagallon played a smart game in the second half and we wish them all the best in the semi-final."