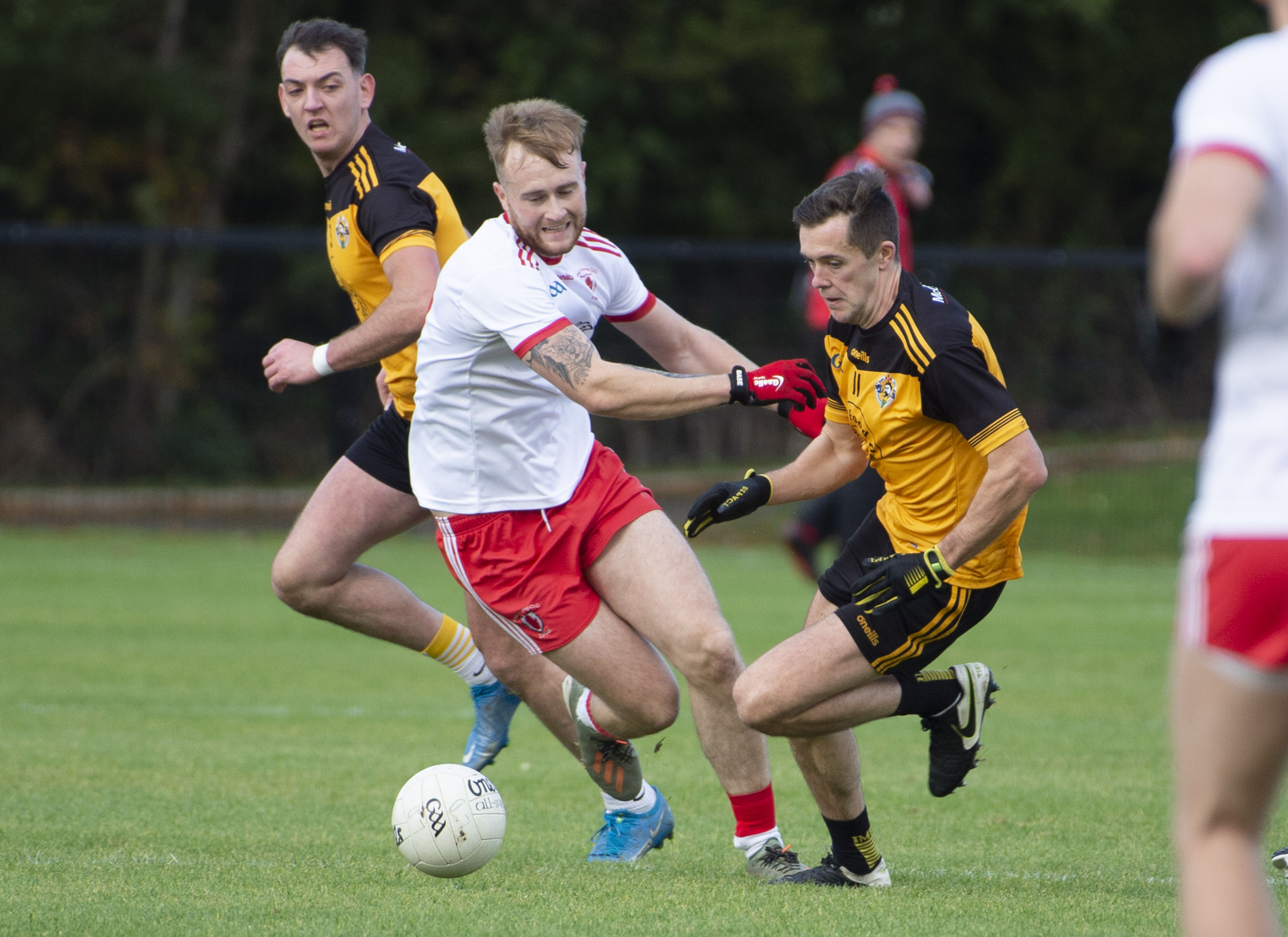 Lámh Dhearg's Pearse Fitzsimons and Portglenone's Niall Delargy fight for possession in the early stages of Sunday's quarter-final at Dunsilly, but Fitzsimons was forced off with an injury in the first half while Delargy was dismissed in the second Marie Therese Hurson

PORTGLENONE booked their place in the last four of the Antrim SFC at the expense of Lámh Dhearg following a full-blooded Championship contest in Dunsilly on Sunday.

Two goals in the closing stages from substitutes Paddy Kelly and Aidan McAleese proved the difference between the sides in a game which had plenty of talking points.

Both sides ended the day with 13 players on the pitch with Niall Delargy facing an anxious wait in the coming days to see if he can have his red card overturned before Sunday’s semi-final meeting against Aghagallon.

Ronan Delargy picked up a second yellow card late in the contest while Lámh Dhearg’s Kevin Quinn was also sent off for a second booking.

Goalkeeper Marc McIlvenny was shown a black card in the final act of a dramatic encounter for an off-the-ball challenge prior to McAleese’s stoppage-time goal.

Despite witnessing his side squander a four-point half-time lead, Lámh Dhearg manager Máirtín Lynch was magnanimous in defeat, although their cause wasn’t helped by losing midfielder Pearse Fitzsimons to injury midway through the first half.

“I think they (Portglenone) kept to their game plan better in the second half,” reflected Lynch.

“I think we tried to impose ourselves on the game after being four points up and it didn’t happen. They took their scores and they were more composed than us.

"We lost our shape and we weren’t tracking their runners and we didn’t do all the things we talked about at half-time.

“Losing Pearse (Fitzsimons) was a blow, but after losing a quarter-final you can always look for excuses.

“First of all, Portglenone deserved it. We had a horrendous year with injuries and we’d seven first-team players missing today, but it was Portglenone’s day and they deserved it.”

Lámh Dhearg’s afternoon couldn’t have gotten off to a worst start as Ronan Kelly gave Portglenone the lead after four minutes.

Michael Hagan then plundered his side’s opening goal from a free after McIlvenny failed to hold on to the ball and the umpires ruled it had crossed the line.

Points from Paddy Cunningham and Kevin Quinn had Lámh Dhearg up and running and they took the lead following a rasping goal from Conor Murray with referee Conal Roberts playing the advantage after Murray was fouled.

Moments later, Declan Lynch played an excellent pass out of defence to find Ryan Murray in space and the centre-forward went through on goal before shipping the ball out to Terry McCrudden for a tap-in goal.

Both sides then lost players, but for difference reasons as Kelly picked up a black card for a third-man challenge on McCrudden while Lámh Dhearg midfielder Pearse Fitzsimons was forced off with an injury.

Despite playing with 14 men, Portglenone engineered their second goal with some brilliant passing from Niall Delargy and Hagan to set up Conal Delargy on 22 minutes.

The quality of the scoring continued with Conor Murray claiming a superb offensive mark and slotting over the bar following a Cunningham delivery.

Just before the half-hour mark, McCrudden struck for his second goal with Conor Murray supplying the pass across goal for the corner-forward to palm into the net to give his side a 3-4 to 2-2 lead.

Kelly returned to the fray to fire over a classy point before the break while Casement’s were fortunate that centre-back Ruairi Hagan escaped with just a yellow following a crude challenge on Marc McGarry.

Kelly opened the scoring in the second half before Ruairi Hagan closed the gap to two.
Ryan Murray clipped over a stunning point from a tight angle before firing over another fine score moments after Conal Delargy had converted a free at the other end.

Midway through the second half, Casement’s levelled the game with Michael Hagan finding the net once again following excellent build-up play from midfield duo Niall McKeever and Michael Donnelly.

With 10 minutes of normal time remaining, both teams were reduced to 14 with Quinn picking up his second booking while Niall Delargy picked up a straight red for an off-the-ball clash with Marc Jordan.

Dermot McAleese moved Portglenone into the lead on 52 minutes and the cheers from the Casement’s signalled a shift in the momentum of the game.

Having controlled the tempo and the terms for the majority of the contest, Lámh Dhearg were on under the cosh against a side who looked determined not to lose after coming out on the wrong side of the semi-final trilogy between the clubs in 2019.

Cunningham and Hagan traded frees as the game moved into the closing minutes, but it was to be Portglenone who struck for the vital scores.

Hagan played an excellent ball over the top to substitute Paddy Kelly, who went around McGarry and finished low into the net to put his side 4-8 to 3-7 ahead on 57 minutes.

Ronan Delargy then picked up his second yellow card and a point from Jordan left just a goal between the sides as the game moved into added time.

As the Red Hands went in search of a goal that would force extra-time, they were caught at the back.

A high ball in from Cunningham was swiftly cleared and, with ’keeper McIlvenny high up the pitch, Casement’s went for the jugular.

Hagan floated a ball towards goal and Aidan McAleese played a wonderful flick back to bring the ball under control and send defender Ryan Diamond the wrong way before planting the ball into the net.

McIlkenny then picked up a black card for a late hit on Hagan to compound a tough day at the office for the Lámh Dhearg netminder as Portglenone progressed to the last four with a six-point victory.