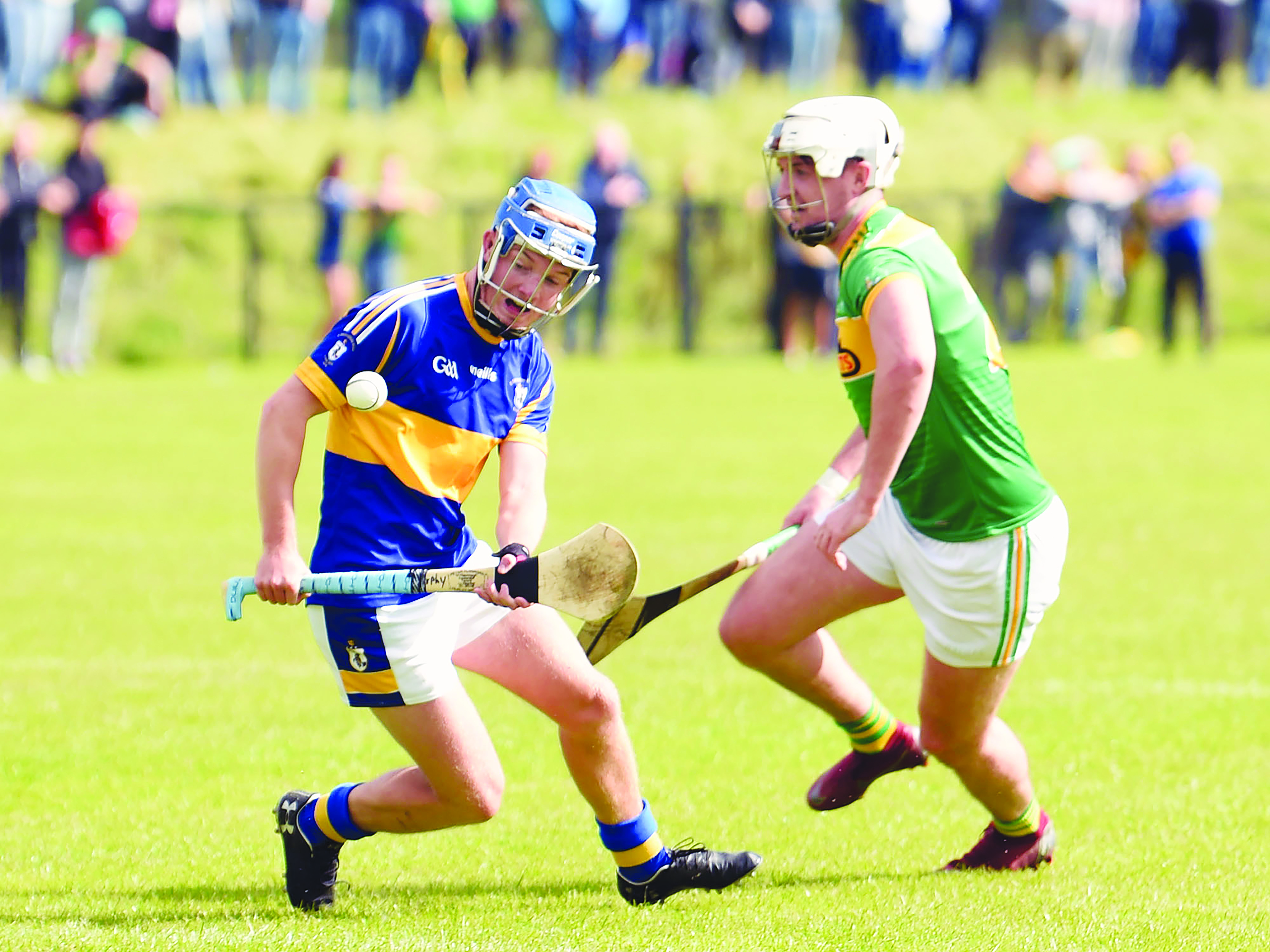 Tiernan Murphy and Conor McKinley came into close contact during last year’s semi-final when Dunloy snatched a last-gasp win over Ross. The sides lock horns again this Sunday with the Volunteer Cup up for grabs

Bathshack Antrim Senior Hurling Championship Final
Dunloy Cuchullains v O’Donovan Rossa (Corrigan Park, Sunday, 3.45pm, Live on TG4)
IT has been 17 long years since O’Donovan Rossa last claimed an Antrim Senior Hurling Championship. Indeed, it’s the same length of time since they were last in the final, but on Sunday they have the opportunity to bring the Volunteer Cup back to the Shaws Road for the first time since 2004.

Standing in their way at Corrigan Park will be a Dunloy side that is bidding for three-in-a-row and a fourth title in five years. Gregory O’Kane’s Cuchullains have been the team to beat in Antrim and will head into Sunday’s final as favourites to continue their dominance.

These sides met in last year’s semi-final with Chrissy McMahon landing the decisive blow deep in stoppage time to break Rossa hearts, so the question heading into Sunday is whether the Jeremiahs can flip the script.

The city side’s dramatic semi-final win over Cushendall when Dara Rocks struck for a winning goal deep in stoppage time has shown the strides made over the past 12 months, but the ultimate test awaits them on Sunday.

“Dunloy’s experience got them over the line,” Rossa manager Colly Murphy reflects of that semi-final.

“It was a bit naive of us in our first semi-final for so many years and this Sunday is our first final in 17 years, so Dunloy have all the aces in the pack.

“We are going into unchartered territory and don’t know what to expect whereas Dunloy do. If you were a poker player, you’d be all-in on Dunloy and I think that’s how most neutrals are looking at it.”

It is a new scenario for this Rossa team that will take to the field in the claustrophobic atmosphere of county final day that brings its own pressures.

That victory over Cushendall created a buzz around the club that was always to be expected, so the job of the management has been to ensure the players block out the noise and concentrate on the job at hand.

There is plenty of experience in the ranks of the blue and gold with many veterans from the All-Ireland Intermediate final win at Croke Park in 2015, while others have experience of the inter-county scene including current Antrim hurlers Gerard Walsh and Aodhán O’Brien.

“You just try to do what you’ve done every week and don’t deviate from it,” said Murphy of the build-up.

“We’ve kept everything basically the same and yes, there’s a bit more hype, but you just play it down and go with the flow, accept it and manage it as best you can.”

Walsh and O’Brien are two key figures for Rossa, but as proven throughout the campaign, there are many others who have put their hand up and delivered at various stages with Michael Armstrong producing a man-of-the-match display when shifted to full-forward against Cushendall and Stephen Beatty in excellent from.

The Murphy trio of Deaglan, Tiernan and Daire are all adept score-takers, while the industry of Seaghan Shannon around the middle reflects much of what this Rossa team is about.

There could be an intriguing match-up with Walsh going up against his county team-mate Keelan Molloy at midfield, while it will be imperative for the Rossa back line to keep close tabs on McMahon, Seaan Elliott and Conal Cunning who all have the ability to light up the scoreboard.

Eoin O’Neill is another match-winner for the Cuchillains, while the evergreen Paul Shiels will likely play his usual roaming role, dropping deep and pinging passes into that red-hot attacking unit.

Therefore, Rossa must be prepared to defend from the front and try to prevent Dunloy from getting into their flow, so it will require a typically energetic display.

The defending champions are littered with top-class hurlers throughout the field, play a highly attractive brand of hurling and have proven they can win with style or roll up the sleeves to dig it out.

“They are a great team and the only people giving is a chance are Rossa people,” added Murphy.

“Everyone is saying it’s Dunloy’s to lose and I agree with that. They are a great team and have proven that over the past four or five years.

“You aren’t a bad team if you’re going for three-in-a-row or four out of five. You have to be something special they are. They’ve quality throughout the field and have experience in ‘Woody’ (Conor McKinley) and ‘Shorty’ (Paul Shiels). They also have Keelan (Molloy), ‘Coby’ (Conal Cunning) and Seaan (Elliott) to name a few, so if you look after one then another one springs up.

“They are a great squad that plays a great brand of hurling and will be so hard to beat, but we are the only team that can stop them from doing that three-in-a-row and we’ll give it a lash.”

It’s hard to disagree with Dunloy entering this final as favourites, but Rossa are very live underdogs. Last year’s semi-final was thriller and if both teams produce, it could be another memorable battle.

The question is whether Rossa have to tools to take that ultimate step having gone one further than last year. By around 5pm on Sunday, we’ll have our answer.