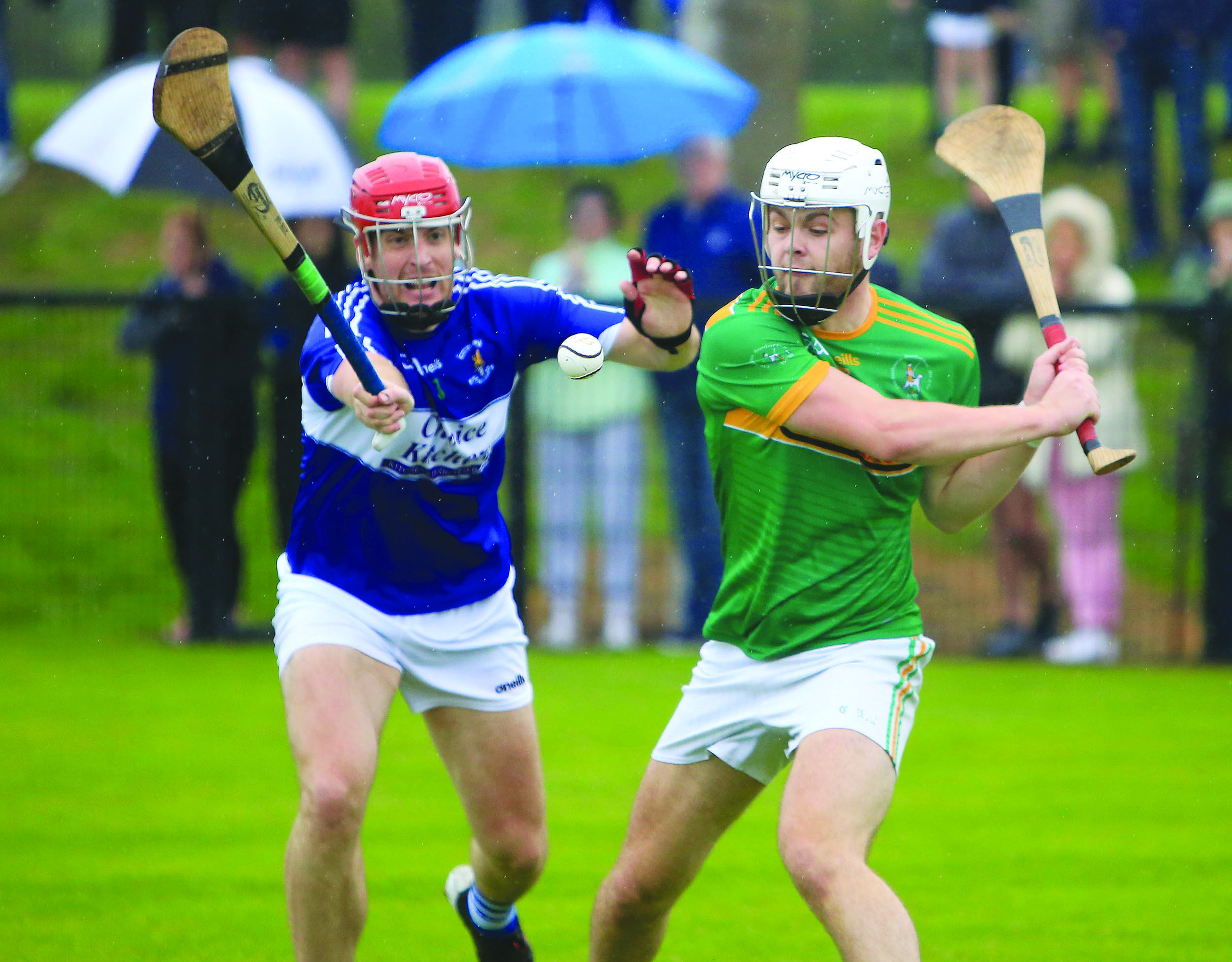 FOUR years on the spin St John’s have come up agonisingly short in Antrim Senior Hurling Championship semi-finals, but they are back for another crack as they aim to topple defending champions Dunloy on Sunday evening at Dunsilly.

In 2018 and 2019, the Johnnies were undone in replays against Cushendall, while the 2020 edition culminated in an extra-time loss to Loughgiel.

Last year, they were undone by this week’s opponents in a game they played almost entirely with 14 men following the dismissal of Ciaran Johnston in the second minute, yet it took a 51st minute goal from Keelan Molloy to see Dunloy break clear as the rain poured in Dunsilly.

There won’t be much need for rousing speeches ahead of this game for Johnnies manager Brian McFall with the motivation of getting over that semi-final hump all they need.

“It has haunted us,” the St John’s boss agreed.

“We should have been in three or four county finals, but we just haven’t got over that hurdle.

“Still, we keep coming back and we will go again this Sunday and give it all we have. Hopefully this time a bit of luck will carry us over the line, so we will see how it goes.

“Everyone will give it 100 per cent and that’s what it will take because they are a step ahead of everybody else in Antrim.”

Dunloy have indeed been the standard-bearers in Antrim in recent times, winning four of the last five titles and are aiming for a fourth-straight Volunteer Cup this year.

They will be big favourites to return to the decider this year and it was the same case when the teams met at this stage last year, but they didn’t have it all their own way in that game.

As mentioned, it took Molloy’s goal to put daylight between the sides after a close battle and one in which the Johnnies felt a little aggrieved when Domhnall Nugent had a goal chalked off, while other chances came and went including a late penalty from Shea Shanon that was saved - although at this point it would have been a consolation score.

“We had a goal disallowed which was mind-boggling and then there were other chances went away from us, but we did rightly,” McFall reflected.

“It was a sucker-punch losing a man after a minute and a half, but we battled right through to the end. If Ciaran stayed on it might have been a different outcome, but you never know.

“They are a good team and we will need to be on our game to get over them because anything short will not be good enough.

“As long as the lads come off with no regrets and they have left everything out there then there’s not much more you can do, so if they give themselves the best chance to win this year, hopefully we get the bit of luck we haven’t got over the last few years.”

On the injury front, Conor Johnston had the cast removed on a broken wrist sustained against Cushendall and will be assessed this week, as will Conall Bohill who has been able to take part in some light training.

Jack Bohill is back in contention as he recovered from a broken collarbone and while all three are a boost, McFall accepts they will have little by the way of hurling done in a while and may not be up to speed.

For Dunloy, Chrissy McMahon hobbled out of last weekend’s football win over Davitt’s and will be a concern as it appeared he rolled his ankle, while Oran Quinn was missing from that game.

But Dunloy have an embarrassment of riches at their disposal with the aforementioned Molloy, Conal Cunning and Seaan Elliott all capable of lighting up the board.

Eoin O’Neill has spent the last number of months in London, but this is tempered by the return of Nigel Elliott, while in Ronan Molloy, Kevin Molloy, Deaglan Smyth, Phelim Duffin, Aaron Crawford, Ryan McGarry and the evergreen Paul Shiels, they have an excess of quality.

The Johnnies will know it will take a massive improvement from their quarter-final win over Ballycastle where they just about got over the line having underperformed and spurned countless chances, so they will hope that game will have removed gremlins from the system as anything short of full tilt will see them come up short at this stage once again.

“They have smashing forwards and are just a good all-round team,” McFall agreed.

“I said to the lads that if we go out and hurl like we did against Ballycastle, Dunloy will punch holes all over you, especially with their forwards.

“We have to cut out the mistakes and missed a lot of chances against Ballycastle: 16 wides and eight short into the goalkeeper’s hands. Against a team like Dunloy, you just have to take your chances or they will punish you.

“We know what it will take to get over the line on Sunday, but we have nothing to lose so we will go out and give it all we have.”