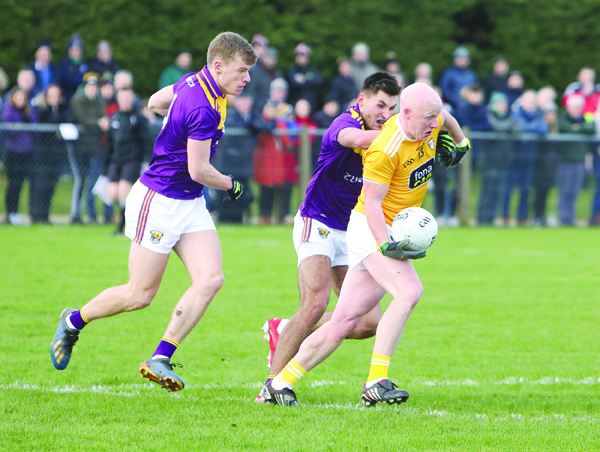 Lenny Harbinson was delighted with Paddy Cunningham’s impact against Wexford

WITH two points already in the bag, Antrim make the long trip to Sligo on Sunday hoping to make it two wins from two in their quest for promotion from Division Four.

Go back a decade and these counties were riding high at the top of Division Three with promotion for both the end result, but it is a different reality these days.

Both began the new campaign in fine style with an opening day win and displayed their goal-getting prowess with Antrim’s finding the net three times in their win over Wexford, while the Yeatsmen bagged five majors in their 5-9 to 0-11 win in London.

Pat Hughes and Paddy O’Connor found the net twice apiece with Darragh Cummins hitting the other to give them a morale-boosting win ahead of the visit from Lenny Harbinson’s side this week.

If 2019 wasn’t one to remember for Antrim fans, it was possibly worse for Sligo as Paul Taylor’s side lost 10 games, so they will be on a high following their opening win.

The onus is therefore on Antrim to take a grip on this game and plant a seed of doubt in the hosts’ minds as they look to build a platform for what they hope will be a successful campaign having seen their promotion hopes crumble before they started 12 months ago.

Harbinson knows it will be a battle to come away with the points on a ground that hasn’t been a happy hunting ground in recent years.

“If you look at Division Four and Division Three, outside of a few teams, there are 13 or 14 teams of a similar standard,” he said.

“This time last year had a very competitive game against Derry and were probably slightly unlucky to lose it when a draw would have been a fair result.

“Then, away to Leitrim it was another game well within our capability to have won but didn't. All of a sudden you are on the back foot.

“This year, we've done a lot of work and that mix of youth and experience gives you something to build on.”

One of those experienced heads is Paddy Cunningham who made his inter-county return against Wexford and kicked six first-half points.

The Lámh Dhearg attacker remains one of the best forwards in the county and so it proved with his positional sense, use of the ball and accurate left boot standing out in their win.

Harbinson is delighted to have the 34 year-old back on board and says his withdrawal in the second half against the Slaneysiders was simply precautionary ahead of Sunday’s trip west.

“Early on he scored a few points to settle us and showed his experience,” he agreed.

“I'm a great believer in trying to get the right balance between youth and experience. From that aspect, I don't care what age somebody is - it's trying to find that balance.

“We just had to be careful with him because he had been carrying a hamstring injury, so it was just precautionary ahead of the game against Sligo.

“We'd probably have liked to get Conor Murray off too because he is only coming back, but there were a few boys who picked up knocks.”

Antrim teams haven’t had a great deal to shout about in recent times as they have yo-yo’d between the bottom tiers in the League and face into a summer competing in the new All-Ireland B competition once their Ulster campaign ends.

While the bigger picture may look bleak, Harbinson insists his county must get things right across the board in what is going to be a long-term strategy for football in the county.

“Antrim have been floating between Division Three and Division Four for a long time,” he noted.

“We're trying to build momentum, but it's not easy and that's the same for every county outside the top six who are competing for the All-Ireland. The other teams are left in the wilderness to a certain degree, but that's up to us to get our own house in order.

“Part of fixing that is Gaelfast and what are we going in the secondary and grammar schools? 1986 is the last time an Antrim school won a MacRory Cup.

“When you think about that, we're massively on the back foot until we get those underage structures on a platform. It doesn't matter if I'm here or someone else is over the next couple of years - we've got to get that right.

“We have to get our house in order and start climbing the ranks. When we do that, then we can start competing at another level, so it's about gaining promotion from Division Four and consolidating in Three, but that's easier said than done.”