Arrest after suspicious death of man in Divis 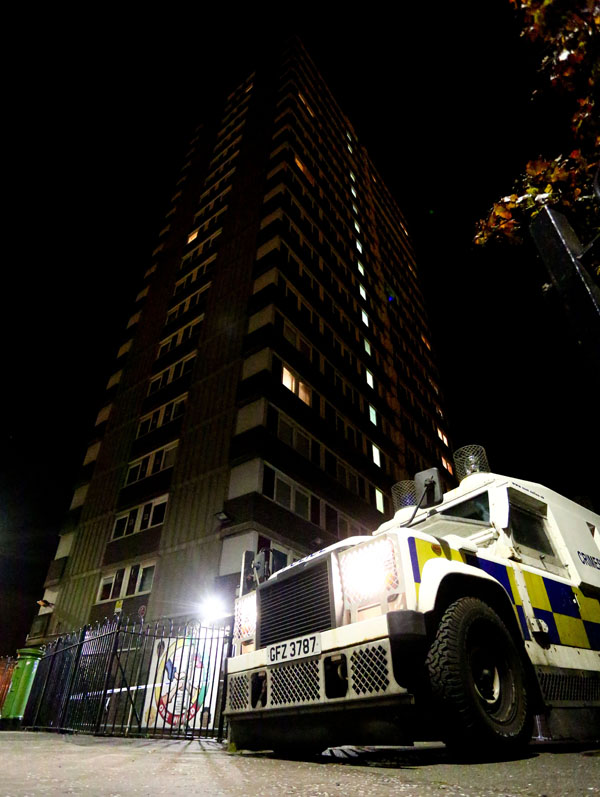 Police officers at the scene of a suspicious death in the Divis Flats last night. (Photo by Kevin Scott / Presseye)

POLICE are investigating the suspicious death of a man at a flat in Divis Tower in West Belfast.

A 42 year-old man has been arrested in connection with the discovery of the body at the tower block on Sunday night.

The man has been named locally as James ‘Jim’ Hughes, who was in his early 60s.

Police said investigations are at an early stage but have appealed for anyone who heard anything suspicious on the 14th, 15th or 16th floor of the building to get on touch.

Sinn Fein MLA Fra McCann said the local community is in shock after the death of the man.

"The local community is in shock following the death of man in Divis Tower.

"Divis Tower is a tight knit community and this will be felt by those who live there.

"It is too soon to speculate as to the cause of death but the PSNI are treating it as suspicious.

"I would urge anyone who saw anything suspicious to bring that information to the PSNI.

"Our thought and prayers will be with the victim's family and friends at this time."

In a separate incident in West Belfast, a man was shot in the leg in what police described as a ‘paramilitary-style’ gun attack.

The attack at Springview Walk, off the Springfield Road was reported to police shortly after 7.10pm on Sunday night.

The victim, who is in his 30s, was taken to hospital for treatment with his injuries not thought to be life-threatening.