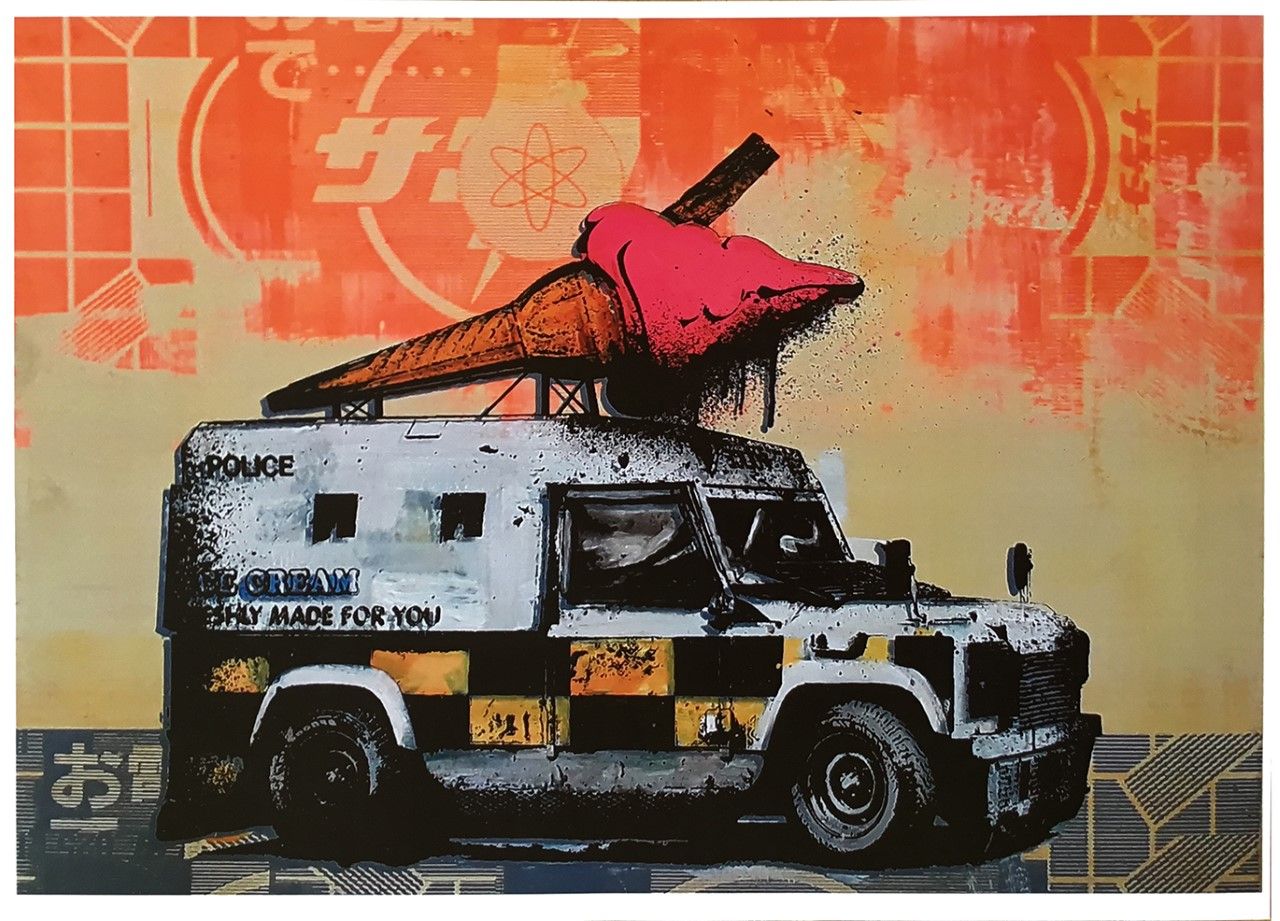 Transmuting our visual language is part of the role of the artist, acting as a conduit for what we see and feel around us, sometimes acting as a mirror.

Leo Boyd came to Belfast and tried to figure out what was going on. I first came across him a few years ago. He was part of a group with a shared shop in the city centre.  A possessed screen printer, he has birthed images of contemporary Belfast that required an outsider-insider's view. Often with a sense of humour.

An article about a police van playing an ice-cream tune from its roof inspired this image (above) called meat wagon. Police Land Rovers are rarely seen in visual art and its cheeky nod to contemporary Belfast gives us all a bit of light relief.

Leo recently was commissioned by the Haslem Hotel in Lisburn to provide art for their rooms. He often works along with Laura Nelson who developed a very interesting, cheeky lockdown print called ’Apocalypse Agogo'.  A member of Belfast Print workshop and Vault studios, he’s available on Instagram.

Don't miss #ThePeopleofBelfast, a thought-provoking exhibition by Frans Gertenbach, which examines the plight of the homeless in Belfast. Hosted in association with @homelessbelfast, the exhibition runs at #artcetera #belfast until 26 September. pic.twitter.com/38pxZjy6Hn

Artcetera on Rosemary Street, formerly known as Red Barn gallery, has received short term emergency funding from the Arts council of NI to host group exhibitions of Belfast visual artists until March. Why bother? some say.

Well, there have been a number of visual art galleries, hubs that have been pushed out of the city due to the developers; others are hanging on by a thread. Over the years, as Belfast splutters into being post-conflict, the visual arts is one sector that has encouraged hundreds of people to participate in the culture and night-time life in our city.

When the flag protests were going on in 2012-2013, it was only the artists and art-lovers who managed to still come into the city centre for some cultural nightlife. When people do not have opportunities and space to show the result of their training or their passion, they simply go elsewhere.

Olivier Martin took up the gauntlet from Frankie Quinn who used to run the gallery in the space. It may have no windows but it’s an important hub of creativity in the city.

Jess Gunn is showing in the gallery. She is a director of Platform Arts, one of the studio groups/galleries that have moved to Connswater shopping centre in an old bank as a result of demolition and development in the city centre. They did have an international exhibition planned for the beginning of December but it’s a case of wait for  details.

The Duncairn announced this week that it will shift its Take 2 magazine programme to a weekly slot up until Christmas. They are getting the hang of producing it. This week, from their coverage, I enjoyed finding out that Carál Ní Chuilín, the Minister of Culture Arts and Leisure, enjoys making quilts. As someone whose route into art college was helped by an ability of sew and make things, I always lament the fact that many young people no longer get the opportunity to learn this creative skill. It’s like a meditation and can act as an amazing stress relief.

What does an ex-leader of a political party in Northern Ireland do when he stands down? I was watching 'Welcome to Northern Ireland' a film programmed into the Belfast Film festival and had a nagging feeling I recognised the  man in the lead part, only to figure out it was Steven Agnew ex-leader of the Green party.

The film's story line focuses on him returning to Belfast after being away for 20 years and his experience of re-entering society. Belfast is shifting so much that already some of the issues highlighted have changed — like abortion laws and gay marriage. Nevertheless, the movie has caught the city pre-pandemic and the Cathedral Quarter when it was possible of get a pint for under a fiver and tourists abounded. The Belfast Film Festival continues — hats off to them for trying to get us back into the cinema but it might be a while yet.

Max Cooper is a superstar DJ from Northern Ireland who took over Carlisle Memorial Hall in North Belfast with the help of Arts Council NI, Red Bull and AVA X. He combines music, re-mixes and visuals to make immersive experiences most often seen in clubs. But with clubs very much closed, seeing it on You Tube  was the next best thing. You can see his knowledge of being a geneticist in his visual language as the music swirls around you. Taking you into a different zone with the music, a multi talented, homegrown, global creative.

Speaking of another homegrown, global talent, Oliver Jeffers has been selected to participate as one of the creatives working on the Festival UK 2022 Research and Development programmes next year along with his brother Rory. Die Hexin the amazing multitalented sound visual performer is also one of the selected artists. It will be interesting to see what they all come up with alongside Belfast International Arts Festival, Ulster Museum and other partners.

How do you pick out excellence in dance locally? Well it helps if you know different dances work and have an awareness of the artform in general. I never really knew much about contemporary dance until I was asked to make costumes for a show performed in Battery Park, New York.

It sounds glamorous but I also helped move the forms around that the dances used as props. It led to me being asked to conceptualise and make all the costumes for a ballet in Zaragoza ,Spain.

The interesting thing about this twilight period we are in for the arts is that lots of art forms are being filmed and made public online.

The Catalyst Dance Festival, available on YouTube, is an excellent way to get an overview of contemporary dance in Northern Ireland. Apart from the three dancers spotlighted, I noticed Dylan Quinn who has done amazing performance work along the border in Fermanagh as well as working in the area of dance and masculinity.

As we try and transition from a warrior to a peacemaker society, how we move our bodies and shift out of the cultural reflexes is of vast important and is not acknowledged or supported enough. Leonagh McDonagh is another dancer I came across by randomly  picking a comedy dance event at Belfast Festival. She developed the alternative Christmas panto at The Mac for a number of years which had great potential for being moved to a larger stage.

It had excellent, humorous audience interaction and was the first (and I have to say only time) I have ever seen a man (or anyone for that matter!) do a pole dance. Gary Rowntree in the Catalyst video shows an amazing moving dance based on two men falling in love.

The Out to Lunch Festival line-up is live, bringing you an eclectic mix of live streamed culture for January.

With Public galleries still closed, The MAC has opened its booking system for 11 December.