Back injury forces Burnett to retire against Donaire 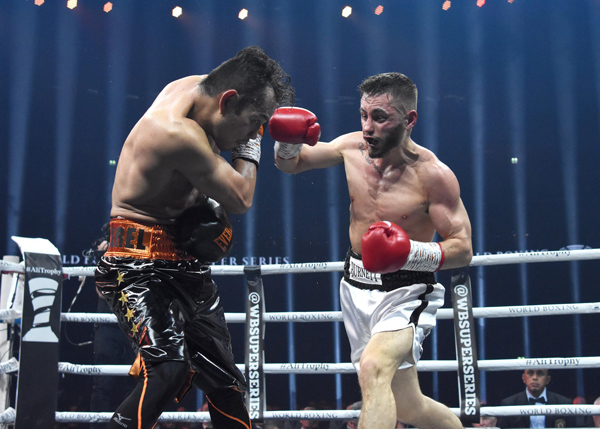 From David Mohan in Glasgow

IT was a hugely disappointing and frustrating Saturday night at the Hydro Arena in Glasgow for Ryan Burnett as he was forced to retire on his stool at the end of the fourth round against Nonito Donaire after he slipped a disc in his back.

The result means the North Belfast man lost his WBA bantamweight title with the Filipino now advancing to the World Boxing Super Series semi-final against Zolani Tete as Burnett now faces an extremely long road back to the summit of the division.

Given the nature of his loss, it was extra disappointing for all in attendance as Burnett was taken to hospital on a stretcher straight after with an oxygen mask around his face after what had been brewing into an excellent contest.

After a cagey opening round, it was Donaire who seemed to do just that little bit more with a couple of lefts catching the eye and a ight hand perhaps edging the opening frame in his favour.

Burnett grew into the fight in the second off his jab, landing a good right hand over Donaire's guard, but was being cornered by the Filipino who was also having his own success with some solid shots and a right to the ribs grew a gasp from the crowd.

However, it was the North Belfast man who started to get his combinations going in the third, out-boxing the challenger as he started to take charge and looked well placed to kick on.

However, things unravelled in the fourth as the Newington man took the centre of the ring, extended his body to let a right hook go that missed, but in doing so he clearly injured himself, going down for a count despite no punch landing.

As he rose, he backed against the ropes and the Filipino sensed this was his chance, unloading powerful shots with Burnett unable to get his right hand up to protect himself, but while he saw the round out, his trainer, Adam Booth pulled his man out.

Neither fighter or coach were available for comment after, but the new champion paid tribute to the Belfast man and while happy to win yet another title belt, wished him a speedy recovery.

"There were a lot of body shots we were working on and maybe they had an effect, but there's also that when we started to box, we weren't in front of him and when he hit, he was pulling back with his punching and his body wasn't co-ordinated properly," he said.

"I don't know exactly what happened, but I just hope he is healthy and he heals well.

"I was hitting him hard to the body, but I did notice that when I made him miss, he was pulling too much.

"I told him after he is a greater fight and I didn't want to win this way, but I told him to keep rising .

"I knew Ryan was a tough guy coming in, but I felt great and going through the rounds, I think I showed what I'm capable of in this weight class.

"We didn't come out of this the way we wanted to, but a victory is a victory and I'm so grateful for this opportunity. Tete's next."

Event promoter Kalle Sauerland was also disappointed with the ending, but paid tribute to the victor who looked back to his brilliant best on the night.

"It was a very unfortunate ending as I think it was turning into a great contest," he added.

"Nonito looked sensational and was loading up on punches.

"Ryan was countering well and then he seemed to slip a disc in his back. Credit to him, he got up and continued on for the rest of the round, but Nonito is a seriously experienced individual as the highest level. He put it on him and there was no way back.

"It's sad for Ryan, but it's a tough sport and Nonito has seen it for both sides. The 'Filipino Flash' is back."