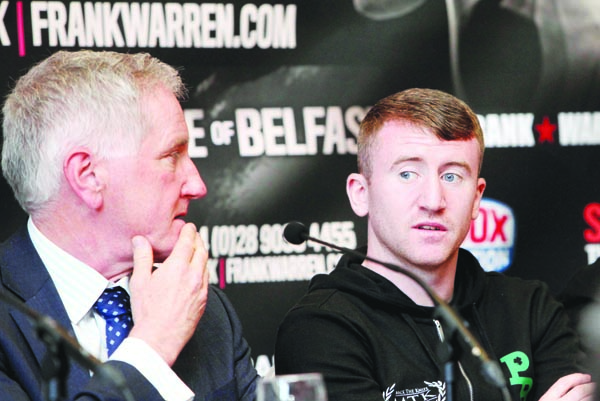 PADDY Barnes insists he is ready for what he concedes is a big step up in class when he takes on Romanian Silvio Olteanu in his first 10-round bout for the vacant WBO European flyweight title.

After two fairly forgettable outings, Barnes will be hoping his fledgling pro career takes off at the Waterfront Hall on Saturday night when he challenges for a European title in just his third professional fight.

“It is a big step up in class. He (Olteanu) has fought for the world title, he has won European titles and he’s obviously going to come to win against somebody who’s only 2-0.

“That excites me and it makes me train harder because I’ll be more nervous. I’ll be ready for this fight.”

His debut fight ended prematurely after Bulgarian Stefan Slavchev was disqualified after lifting Barnes in the fourth round before Barnes easily defeated Argentina’s Adrian Dimas Garzon on points in his second pro bout.

Barnes believes taking on a seasoned veteran will help silence his critics after two non-events in his first two fights as a professional.

“It's good for me to step up because I don't like people talking and saying: ‘Barnes is fighting a nobody’,” said the North Belfast boxer.

“This time I'm not fighting a nobody, I'm fighting an ex-European champion and somebody who has fought for the world title, so I'm not fooling anyone.

“I am going into the deep end to fight for a title in my third fight. People should come and see how good I really am.

“They haven’t seen the best of me because I've been fighting against people who have come to survive and don't want to attack me. It is hard because you're fighting somebody so negative.

“When you’re in the ring with a novice and they are running about, it is hard to fight like that.”

Tyrone McKenna, meanwhile, has had a hectic week in the run up to his bout with Lukasz Gworek of Poland on Saturday night.

The West Belfast fighter says that moving house has helped keep him busy as he looks to extend his unbeaten record at the Waterfront Hall bill.

McKenna was added to the ‘Battle of Belfast’ card as he aims to build on his impressive stoppage of Dubliner Jake Hanney at the same venue back in February.

‘The Mighty Celt’ says he has enjoyed a great training camp in Spain alongside Paddy Barnes and Dublin’s Jono Carroll, both of whom will also be in action on Saturday night.

“Preparations have been brilliant. I had a good few weeks with Paddy Barnes and Jono Carroll over in Marbella,” said McKenna.

“Sparring has been great. I have been doing 10 rounds and I am fighting six rounds so I am flying fit.

“My weight is perfect so I am happy enough.”

“I was either going to be on this bill or the Sky bill (last week).

“I have fought on BoxNation for my last two fights so they kept me on this one.

“We had an opponent, but he had to pull out.”

After fighting two Dubliners in Hanney and the previously unbeaten Sean Creagh in his last two fights, McKenna will take on the Poland’s Gworek over six rounds at the Waterfront this weekend.

While he admits his opponent is something of an unknown quantity, McKenna is confident of securing the verdict.

“I kind of thought to myself that he had built up a few easy wins, but I went and checked him out and he is a good boxer,” said McKenna.

“He fights on the backfoot and he moves well – he will be a tricky opponent.

“He has had a couple of decent wins so it will be interesting to see what he is like come Saturday. I think I will handle him ok and hopefully, I can get a knockout.”

McKenna added that a eagerly-anticipated domestic dust-up with Phil Sutcliffe Jnr is now on the back-burner after the Dubliner lost out to Josh Leather in Leeds last month.

“I would love to have made it happen for this fight, but he lost a couple of weeks ago to Josh Leather,” said the Lenadoon southpaw.

“I don’t know what he is going to do now. He might look for a ‘bounce-back’ fight after that defeat.

“Everyone in Ireland wants to see that fight and I am all for it.

Dubliner Stephen Ormond will also fight for a European title against Craig Evans while former Irish Olympian David Oliver Joyce will also make his pro debut on the bill. Jamie Conlan, however, won’t now feature on the card.

‘The Mexican’ had been due to take part in a eight-rounder as he continues to build towards a potential world title bout later in the year.

Speaking last month, Conlan had hoped to take on Rex Tso later this year, but those plans are in jeopardy as Naoya Inoue is no longer vacating his title by moving up in weight.

Instead, Tso and Kohei Kono will fight in October for the right to take on Inoue.

All this leaves Conlan in limbo, but the fact that he has pulled out of Saturday’s bill suggests that something else may be in the pipeline for the popular super flyweight boxer.