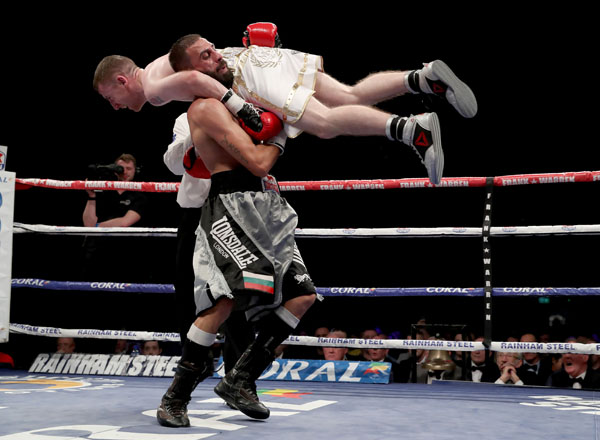 Paddy Barnes is lifted by opponent Stefan Slachev during their flyweight bout at Belfast’s Titanic Exhibition Centre on Saturday night. The Hungarian was subsequently disqualified by referee Hugh Russell Jnr

PADDY Barnes made a successful professional debut in Belfast’s Titanic Exhibition Centre on Saturday night – albeit in somewhat bizarre circumstances.

The three-time Olympian was well on top of his fight with Bulgarian Stefan Slavchev when his opponent was disqualified in the fourth round for lifting Barnes over his shoulder and carrying him across the ring.

The incident prompted a chorus of boos from the partisan crowd and referee Hugh Russell Jnr had little option but to call the fight to a halt after Slavchev had received earlier warnings for wrestling Barnes to the canvas.

Barnes had become visibly frustrated at Slavchev’s tactics and, speaking after the fight, he expressed his disappointment that he wasn’t able to showcase his full potential in front of his home support.

“He could have paralysed me if he’d have thrown me to the ground,” said Barnes.

“I came here to fight.

“Obviously, everyone knows that journeymen come to survive but I couldn’t even pin him down or make a fight out of it or impress the fans, who were great, because he was running away so much.

“It was a frustrating fight. In amateur boxing people come to win even if they’re crap.

“He was crap and he ran away – it’s so frustrating. That’s the business and I know it. If I had slowed down a bit I might have caught up with him, but I was trying to land anything clean. It was desperate.”

Co-headliner Jamie Conlan had a more routine win when he claimed a wide-margin points victory (80-72) over Hungarian David Koos.

In truth, Conlan was rarely troubled by his opponent and the West Belfast boxer now has his sights set on a world title eliminator early next year.

“Frank Warren is saying a WBO final eliminator is done but it’s when it’s done is the thing,” said Conlan.

“Myself and Paddy (Barnes) will be back here (in Belfast) in late February-early March. The reception we got here and the way things were done here tonight – I think they should be coming here every time.

“I want all my fights here.”

It was a great night for local fighters as Marco McCullough claimed the vacant WBO Intercontinental featherweight title after Luis Lugo retired prior to the start of the fifth round.

Earlier in the night, James Tennyson scored an impressive 40-26 points victory over Rafael Castillo of Nicaragua to set up a domestic clash with Declan Geraghty for the Irish super-featherweight title next month.

Steven Ward also made a successful pro debut when he defeated Bulgarian Merdjidan Yusseeinov on points while fellow Belfast boxer Tyrone McKenna emerged victorious from his all-Irish Celtic super-lightweight championship bout with Sean Creagh when the Dubliner was retired by his corner before round six.