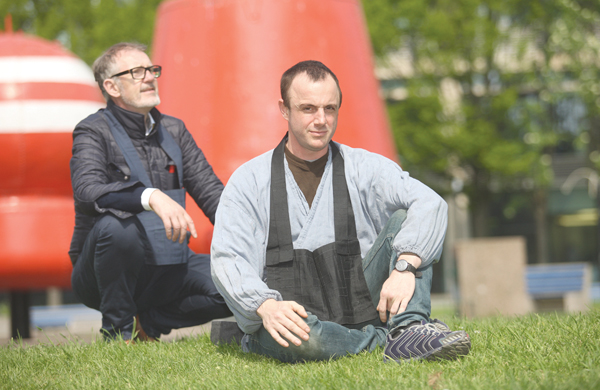 AMONG all the efforts made to resolve the problems of post-Troubles Belfast, Buddhism and the art of meditation would be considered an outlier as far as solutions go.
But meditation and mindfulness are becoming a more widely known way of coping with the daily grind – and classes are available across the city.
Frank Liddy has been at the forefront of mindfulness and his work in establishing Belfast as a ‘compassionate city’ has been successful. But he says this work has only been able to go so far, as the city has never had a full time Zen master who can take learning to the next level. Now, through his contacts in America and with Belfast-born Zen priest Paul Haller, Frank has been able to invite Zen priest Graham Ross for an extended stay in Belfast.
Speaking to the North Belfast News after marking three weeks in the city, Graham says there is a lot to Zen that can benefit the people of Belfast.
“Zen is essentially how to bring our awareness to the present moment, how to enjoy our lives through its difficulties, its joyful occasions and sorrowful occasions and about how to really stand in the middle of that and fully live and fully feel, and fully forgive and fully be passionate,” he said
The issue of forgiveness in a post-conflict society is a thorny subject, but Graham says the Zen way of dealing with this is to fix yourself.
“The way I see forgiveness is that you can’t forgive anybody and no-one can actually forgive you. The only person that can forgive yourself and forgive others is you, so forgiveness is about turning inward and integrating your experience.
“The only way you can do that is if you’re really aware of that experience and how it arises and effects you in the present moment.
“I imagine that Frank’s mindfulness programmes focus on bringing people to awareness of what’s happening now and it’s the same with Zen. How can we turn the light inward and shine the light inside? In that way, and only in that way, can we begin the forgiving process.”
Central to developing this is to tune in with your breath, says Graham.
“Connecting with the breath in and out of the body allows that to be an anchor so during times of difficulty in particular we are able to connect to something that is grounding and allows us to have a little bit of detachment from our awareness. So perhaps the object of affliction is anger or you’re feeling like a victim who feels that justice hasn’t been served. In the midst of that experience of being gripped by emotion, breathing is something that is always there and grounds you and can give you a little bit of space from being completely blended with that affliction.”
Frank Liddy said he was delighted to have been able to facilitate Graham’s two-month stay here.
“Graham has been here for three weeks and will be here for another month. That means for once we have an established Zen priest in the Zen Centre in Donegall Street and that opens up a lot of possibilities. For me, it’s good news we have some presence here from an ordained Zen priest. We are now part of this beautiful network and we are over the moon to have him here.”
Graham says he is beginning to connect with the city.
“I am enjoying my time. It’s a wonderful city and people are very friendly. There’s a little bit of an edge you can feel with some of the history and the difficulties of the Troubles but it’s very clear that people are making a real strong effort to open and be open. It’s one of the most difficult things to work with one’s own animosity and angers and grief – grief is one of the most difficult things mostly because we want somebody else to fix it and that will never be satisfying. There will always be ‘something else’ so it’s how you integrate your life. We talk about ‘Zen becoming Zen’ and when Zen becomes Zen you become you. In a sense it’s really all about becoming yourself.”