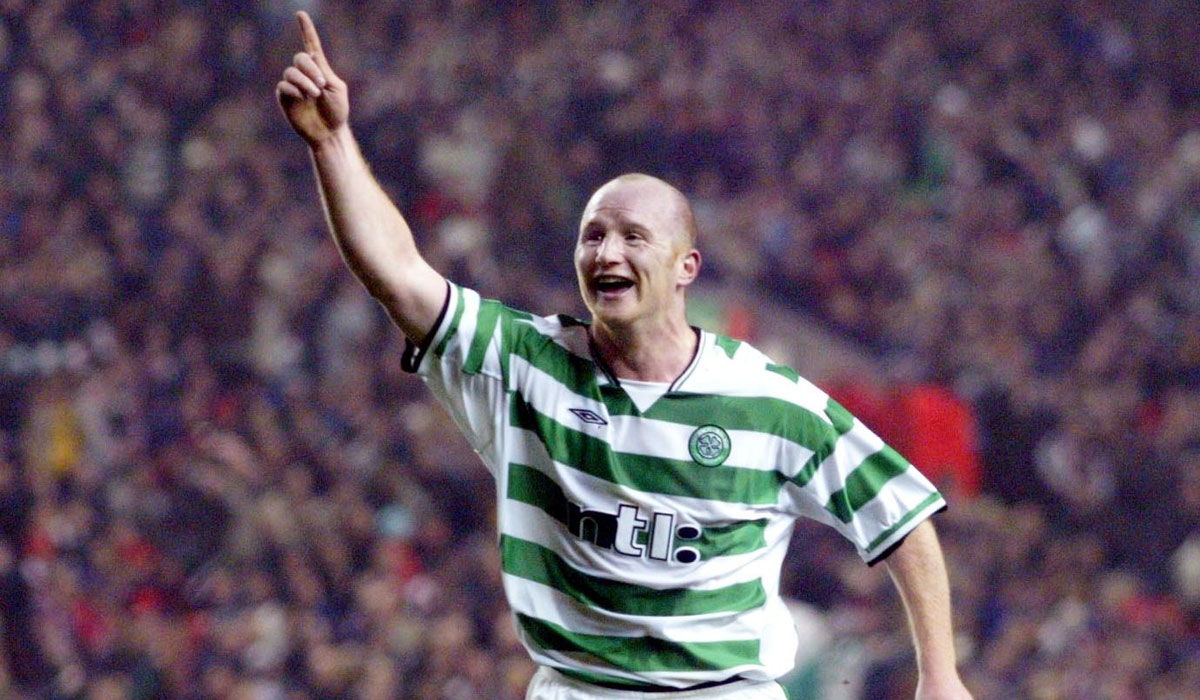 THE LAST player to score 100 goals for Celtic Football Club is to address a sold-out Rock Bar event this weekend as he shares his inspirational and emotional story of how he fought  back against the cancer that almost killed him.

Ahead of his Falls Road visit, Celtic hero John Hartson told the Andersonstown News that he is looking forward to coming back to West Belfast.

John will be signing copies of his book, ‘Please Don’t Go: Big John’s Journey Back To Life’ for the lucky fans who managed to secure a ticket to Sunday’s hugely popular event. John explained how all proceeds raised from the book will go towards the John Hartson Foundation.

“I set the Foundation up in 2010 as I continued to battle through my illness. I’ll never be able to thank the doctors and nurses who looked after me enough, but I can turn up at the hospital where I was treated with a cheque for £5,000 raised from the Foundation to try and make a difference.

“The Foundation is going really well and we have organised loads of events for 2012. I’m going to tackle Ben Nevis again in July. I walked up in July 2010 – three months after coming back from my ordeal. It nearly killed me, to be honest with you, as I had had lesions removed from my lungs and it was hard to suck in the air. It took me five hours to go up and three to come down again. It is the biggest mountain in Britain, so it was by no means a stroll in the park. I’m hoping through the Foundation we can raise £50,000 for the York Hill Children’s Hospital in Glasgow.”

John spoke of how one of the reasons the Foundation was set up was to raise awareness of testicular cancer.

“I ignored a lump for almost four years and I’ll be the first to admit myself that if I had been  aware of how easy it was to get checked things could have been different, but that’s the thing, it is so easy for men to get checked and that’s the message I want to get out there.

“I came so close, so close to losing my fight against cancer. It was 50/50. I had over 400,000 cancer markers, I’ve had 11 operations in the last two and a half years and 77 sessions of chemotherapy. I am very very blessed and fortunate to still be here and this is why my book has been so popular, this is real, it can happen to an ex-professional sportsman  – it isn’t a fairytale. It was kind of like a domino effect: I was diagnosed, my wife Sarah was pregnant, we had a one-year-old daughter and then we found out the cancer had spread to my brain. It was a very difficult time for my whole family and thank God now I’ve got a second chance at life.”

The former Welsh international said he is looking forward to the Q&A session on Sunday.

“I’m very humbled that the book signing has sold out and if anybody has missed out on a ticket I’m hoping to come back to Belfast again in April. I wouldn’t want to leave too many people disappointed and I’m absolutely taken aback by the support out there and the fact the venue is sold out. I’ll be joining the fans and watching the Celtic game against Falkirk afterwards and having a bit of craic."

John is the most recent Hoops striker to join Celtic’s legendary 100-goals club – the one before him was a certain Henrik Larsson. It will be some time before the next.

“I am honoured that I had – and still have – such a great rapport with Celtic supporters. I always gave my all during my time with the club. I was proud to have scored quite a lot of goals during Old Firm and European games and I think I endeared myself to fans that way. I always wore my heart on my sleeve and I’ve never changed since the day I left the council house estate where I was born in Swansea.

“I still have the friends I went to school with. I’m from a very humble background and I’ve never forgotten my roots. I think that comes across, at least I hope it does, when people meet me.

“I like to make time for fans, even the Rangers supporters. When I come into Glasgow airport they want to shake my hand, especially after the battle I came through. They may not have liked me too much when I was playing against them, but generally the respect is there and that is the most important thing about football – if the respect is there than that is fine.”

Asked to select a single highlight from his prolific and successful years with Celtic, perhaps unsurprisingly John picked out the screamer he scored against Liverpool at Anfield in the UEFA Cup quarter-final  in 2003.

“It was probably the best goal I ever scored for Celtic. I was a Liverpool supporter growing up in Swansea and to score against your boyhood club, for Celtic, was a fabulous moment. It’s one of those memories that will live with me forever and I’m looking forward to showing my grandkids what their old granddad used to do for a living one day.

“I missed that [UEFA Cup) final with a back injury but I can look back and say I played my part in getting us to that stage. I played in 12 out of 14 games during that cup run and to miss out on the final was truly heartbreaking. I think the supporters felt my anguish at missing the final, and if I had’ve played, who knows, things might have been different.”

Having played for some of the biggest football clubs in England, including Arsenal and West Ham, John pulled on the green and white hoops in 2001. Friendships remain, but the busy schedules of successful men take their toll.

“If I bump into Neil [Lennon], Chris [Sutton] or Henrik [Larsson] at a function we have a cuddle and shake hands and ask after the family. I’m sure Neil is too busy to be getting text messages from myself. Chris has his own thing going on, Henrik is managing, Jackie McNamara is managing – we are all just so busy. I’ve never been busier, I’ve got three columns, I work with five different TV companies, I have the Foundation and four children so it’s hard to get some spare time. When we do meet up, though, it’s like we have never been away.

“I’m hoping that people who haven’t read the book will find it inspirational and that it will appeal to those who are fighting cancer themselves because they can read from my experience that there is a way out. The book is my way of trying to give back.”

Speaking ahead of the event, Féile an Phobail Director Kevin Gamble said: “The fact that this event is sold out illustrates the massive popularity of John Hartson in West Belfast. Féile an Phobail are delighted to have secured this event for the Falls Road. There is real admiration in this community for how John has conducted himself, both on the field and off. We would encourage people to support the charity aspect of this event by buying a copy of the book and helping the John Hartson Foundation save lives – this looks set to be a very memorable event.”

John Hartson will be signing copies of his book in the Rock Bar on Sunday, January 29. Doors open for the ticket-only event – which is sold-out – at noon.