Boxing: Crocker blocking out the noise ahead of Haroyan test 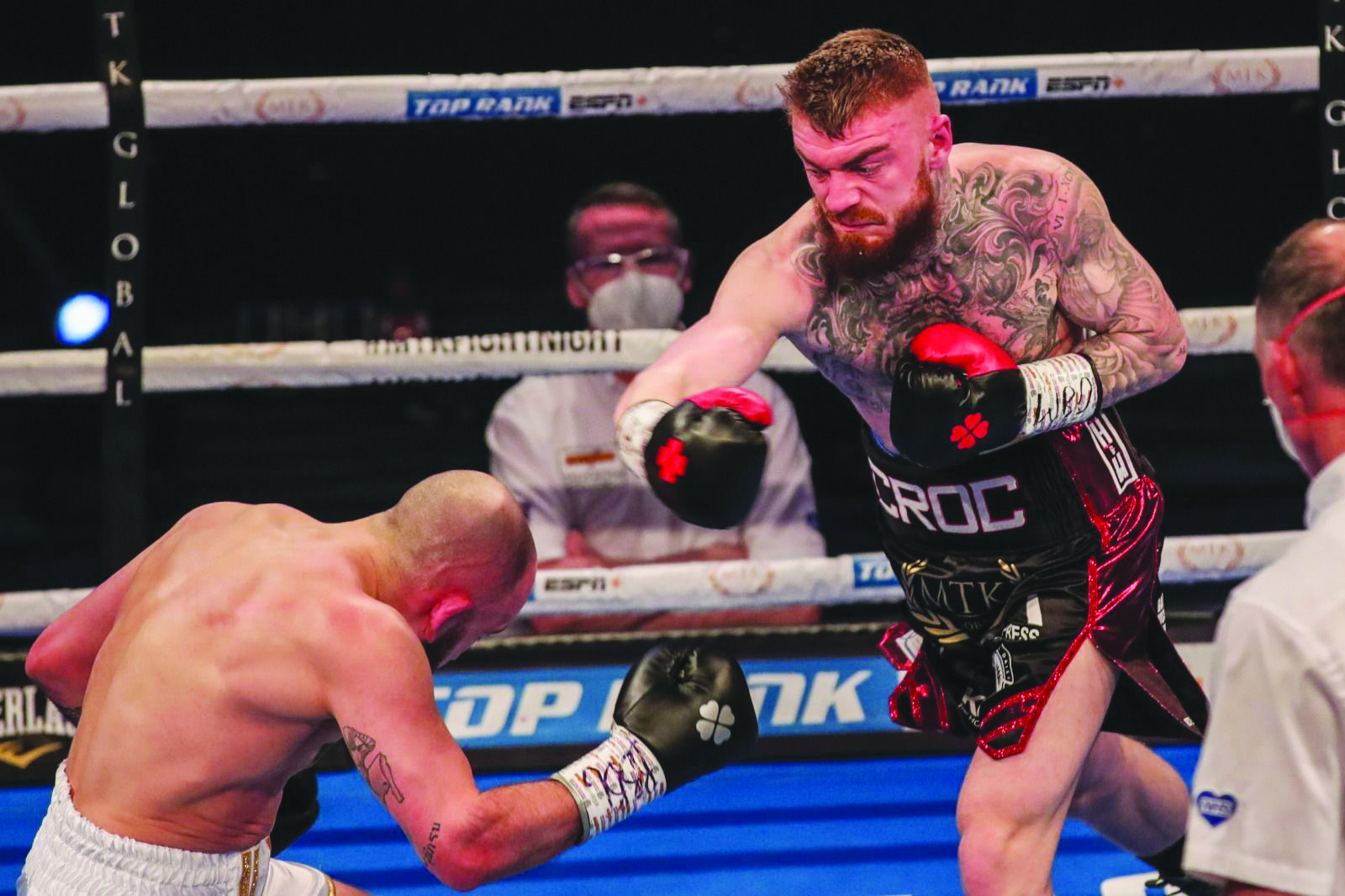 Lewis Crocker impressed in his last fight against Deniz Ilbay

LEWIS Crocker insists there is no pressure on his shoulders as he gets ready to put his WBO European welterweight title on the line against Artem Haroyan at the Ulster Hall tonight (Friday).

The South Belfast won and then made a first defence of the title in England with crowds locked out, so his return to home turf has brought a natural buzz with local fight fans identifying the South Belfast man as one of the city’s next generation who could go right to the top.

Conlan Boxing is aiming to bring regular shows to the city and Crocker can be one to help spearhead this venture, so a big win over the Armenian challenger tonight would help put him front and centre going forward.

Such a scenario could bring an added burden, but not so as the 24-year-old insists the only thing that matters is what happens between the ropes.

“It’s only pressure if you allow it to be,” said the big-punching Crocker, perfect through 13 fights.

“It’s the same job no matter how many people are there to what void is left. Nothing should be stopping you from reaching your end goal and mine is to be victorious on Friday.

“The opportunity is there and the city will get behind someone who wants to entertain as well and I feel as though I can bring that.

“This has to be one of the biggest indoor events in Belfast since Covid, so it will be a night to remember.

“I remember fighting in the Ulster Hall the last time against John Thain (February 2020) and it was maybe four fights from the top of the card, but the atmosphere was still electric, so I can only imagine what it will be on Friday.”

Crocker has a reputation for being a ferocious puncher, but the former Holy Trinity amateur is well equipped in the skills department also.

However, it was in his last fight, a points win over Germany’s Deniz Ilbay, that proved he can dig and find then answers when the pressure is put on.

Ilbay had his moments in that fight despite being dropped with a body shot in the third, but Crocker finished brilliantly to decisively get the nod.

“It was a good 10 rounds and I knew he was durable,” he recalls.

“I kept my fitness in the second half of the fight as much as I did in the first half, which was a big confidence boost for me.

“I dropped him and he’s been in with some top opposition who haven’t hurt him as much as I have, so it’s a confidence booster that will do well for me going into this fight.

“My last two fights have been away in England so you have to do the travel, but this is a lot handier, so I’m relaxed and looking forward to Friday now.”

Haroyan arrives in Belfast with a record of 17-2-1 but this fight with Crocker represents a significant step-up for the Armenian.

Many will expect the defending champion to win and win decisively, but he is parking the noise and just focusing on the task at hand.

A victory will likely see him in prime position to kick on in 2022 and that’s what he is hoping for with bigger prizes likely on offer in what could be a huge year for boxing in the city.

“I think every fight at this level is going to be a step-up,” he insists.

“Each opponent brings different attributes, so I’m expecting tough test like I’ve had in my last few fights.

“I don’t feel the pressure. I’m just there to do my job and if there are no fans or 100,000 fans, it’s still the same job. I think you should be in for a good show in Friday.

“Conlan Boxing say they’re going to be active in Belfast in 2022 so it just shows how many big nights will come to the city.

“There are so many boxers who can headline a show and it’s great to be a part of that.”