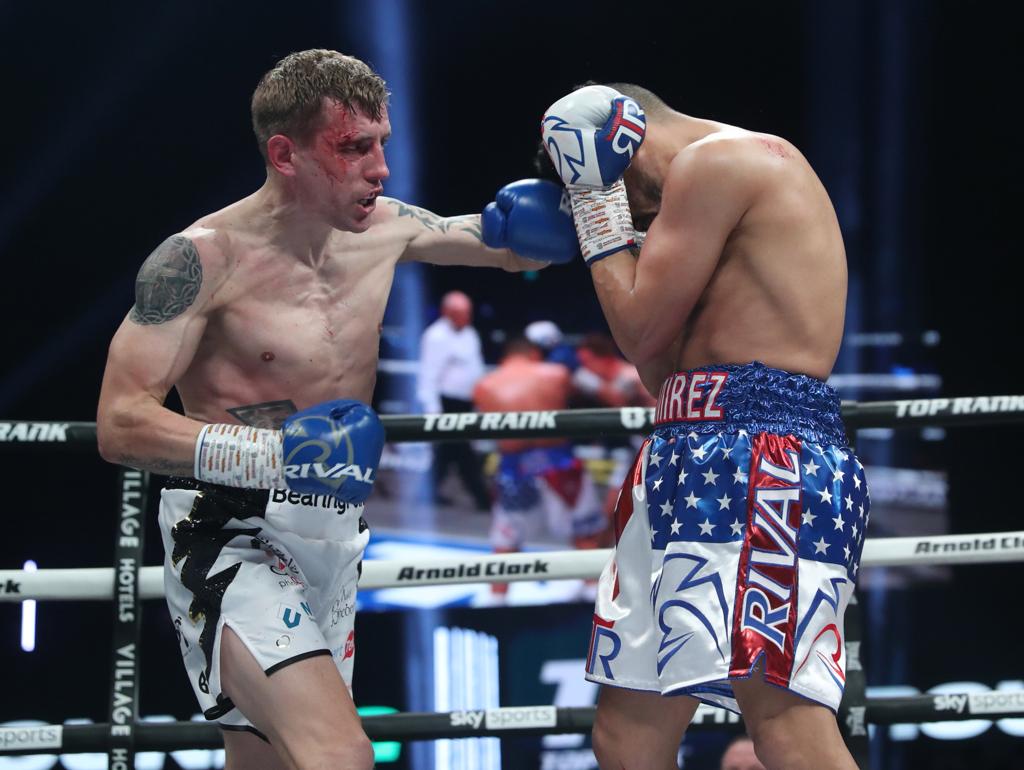 Eric Donovan in action against Robeisy Ramirez earlier this year

Professional boxing will return to Belfast next month as Kildare's Eric Donovan faces France's Khalil El Hadri for the EU super-featherweight title at the Europa Hotel on Saturday, September 24.

Eric Donovan has become one of Ireland's most successful boxers in recent years, having been a highly decorated amateur on the world stage.

Eric came out of retirement in 2016 to pursue a lifetime goal of winning a world or European title as a professional, his journey thus far has seen him collect the Boxing Union of Ireland - Celtic Title and Irish titles propelling him on to the European stage where his record stands at 15-2, the two losses coming against World top ten ranked fighters Zelpha Barrett and double Olympic Champion Robeisy Ramirez.

Khalil El Hadri comes to the table with a respectable 13-1 record having won the French national title along the way.

“This is an incredible opportunity for me," said Donovan.

“I'm delighted and excited about the prospect of making a dream come true. It means the world to me to have this fight on Irish soil where all of my family, friends and supporters can be there in person to make it an extra special occasion.

“It takes a team effort to make dreams come true and I can't the team involved enough; my manager Mark Dunlop, coach Pascal Collins and all the support team and sponsors, who without their help, this would not be possible.

“Finally, míle buíochas do TG4, for broadcasting this event and giving the Irish public an opportunity to watch an entertaining night of professional boxing. I had one of my best nights as a fighter when I won the Irish featherweight title back in March 2019, live on TG4. I hope we can top that with victory on September 24.”

This is our fourth event of 2022 will once again be staged at the prestigious Europa Hotel which has now become home to regular professional boxing on the Island of Ireland, being located in Belfast City Centre it is accessible to all major transport links.

We are proud to also announce that this event will be broadcast live on free-to-air television on TG4.

Dornalaíocht Bheo will be presented by Micheál Ó Domhnaill, he will be joined by a panel of expert analysts and commentators on the night. The programme will be produced by Waterford-based production company Nemeton TV.

All of TG4’s coverage will be available to audiences globally on the TG4 Player at www.tg4.ie/beo and on the TG4 Mobile and Smart TV App.

Spórt TG4 will also have exclusive behind-the-scenes action from the event across its social media channels.

Chief support and fan favourite Tommy McCarthy the former European and WBC International cruiserweight champion will return to Belfast for the first time in over three years as he continues his quest to become World Champion and will take part in an exciting contest on the show which will feature some exciting Irish talent to be announced.

“Eric has been a tremendous ambassador to the sport of boxing in Ireland on both the amateur and professional codes during his career that has spanned thirty years and has more than earned his right to be headlining on such a huge global platform as TG4, this is a real even match up and is sure to have the fans on the edge of their seats,” said promoter Mark Dunlop.

“TG4 is delighted to partner up with MHD Promotions to bring our viewers this brilliant night of boxing live from Belfast. We are proud to be able to bring Irish pro- professional boxing to fans on a platform that is free-to-air in Ireland and across the world,” said TG4’s Head of Sport Rónán Ó Coisdealbha.