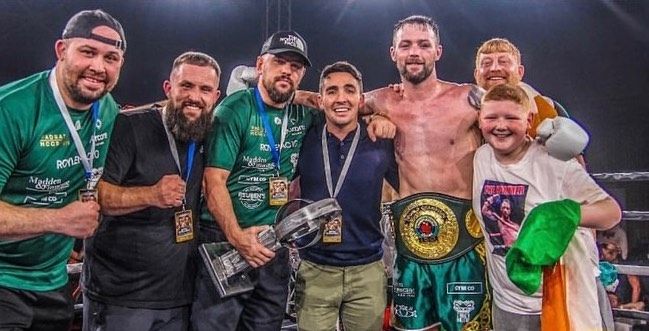 A DECEMBER 10 homecoming for heroic Padraig McCrory is all but confirmed following his night of glory in Frankfurt on Saturday.

The West Belfast man scored three knockdowns in a demolition job on Leon Bunn, closing the show after 1.58 of the sixth round to claim the vacant IBO light-heavyweight title, a victory that should now open the door to some mega nights as the manner of this win, when stepping up in weight, was simply astonishing.

It's not that the power of 'The Hammer' was any great secret, but continuing to take opposition apart as the challenges get greater is an indication that the West Belfast man is still some way off finding his ceiling.

After his victory on Saturday, there is an indication that Wasserman Boxing - headed by Kalle and Nisse Sauerland - will come on board in a promotional guise that will help deliver further life-changing opportunities, but for now, it is about savouring a victory that was as conclusive as they get on away turf and looking to a quick return in the support slot to Michael Conlan in December.

His manager, Jamie Conlan, described McCrory's incredible run as "one of the best feel-good stories in Irish sport" after the victory, but the man himself was almost emotional when reflecting on the road he has travelled from the small hall to the big stage.

"Five years ago, I would have never thought this but now I'm here and I'm IBO World Champion"

"If everyone knew where I came from, the path I've been on with small hall shows, selling tickets - the lowest of the low. But now I'm here and it's joy, it was electric," he said.

"It feels very special. Five years ago I would never have thought this (could happen) but now I'm here and I'm IBO world, champion, so it feels amazing."

There were questions heading into Saturday's fight as the West Belfast man was moving up to the light-heavyweight division, but it didn't take long for them to be answered.

The opening round saw Bunn come out with a high guard, marching forward in order to get close enough to prevent McCrory from landing his big bombs, but everything that was thrown by the Belfast man came with intent.

Both operated well off the jab, with McCrory aiming to take a step back and had the right hand cocked and ready to fire once the gap appeared.

The German was down from a slip, but it was a good opener for the Belfast man who had quickly settled.

Bunn's jab had drawn blood from McCrory's nose in the second, but it was McCrory's power that soon told as a monster of a left had Bunn on unsteady legs with a follow-up right dropping him.

McCrory sensed the finish and Bunn just about stayed up from another left with the assault in full flow, but for some reason, referee Joerg Milke broke the action up to warn McCrory for using the inside of the glove as the bell saved the German.

There was nothing he could help early in the third as McCrory landed a right that had him down again but he rose and despite seeming on the brink, he just about saw out the round but was in real trouble as he tottered back to the corner.

Bunn was looking uncomfortable any time McCrory landed but bravely tried to fight his way back in early in the fourth, but was wobbled by another left.

Perhaps the German was enjoying a little glimmer of light as he got up close and threw to the body, but tagged again with a big right.

The fight was being punched out of Bunn who could not be faulted for effort, but there was just no way back and two minutes into the sixth round he was put out of his misery as a chopping right had him down, landing outside the ropes and while he rose, that was it.

"We sparred guys who had Leon's style and his style suits what I do," McCrory reflected.

"If I'm honest, I expected what happened but Leon was very tough with a faster jab than I thought and the stuck in there, but I got the job done.

"I was expecting him to be fast. He had a good jab and was finding the distance early, but once I got my timing I felt comfortable. Moving up in weight, I said from the start it wasn't an issue as I'm a big super-middleweight.

"I was expecting a tougher pace, but once I caught him early, I knew he had to think twice about coming forward."

A night of joy for McCrory who continues to clear every hurdle and this victory might just open the door to some mega fights and the rewards that come with it.

He is all but certain to get a run out on December 10 before looking to a hugely exciting 2023 that may just have some massive nights against top names in store.

"I know I'm big and strong and that I punch hard," added the St James' man.

"I can also box, so I started with the jab and caught him early. I saw it shook him so I thought I would just walk him down and was punching with him. Eventually it paid off.

"I thought the referee should have stopped it earlier, but we're in Germany, he's a German referee so it's understandable.

"When I saw his corner throw the towel in - the ref was going to let it go on - they were hesitant, but they knew he was taking big shots and I think it was a good choice."

Walker and Molloy march on

On the undercard, Kurt Walker improved to 4-0 in Frankfurt last night as he scored a unanimous points win over Colombia's Yin Caicedo at super-featherweight (60-54, 60-54, 59-55).

The Lisburn man was given a decent test in Frankfurt with a rather bizarre sixth and final round when Walker complained he was bitten.

Until then, Caicedo had been game if crude in his advances with the much classier work coming from Walker who switched stances and at some stages there was a hint he may close the show.

This was yet another accomplished performance from Walker who displayed his array of skills with good movement, accurate shots to body and head as he controlled the bout from start to finish.

After the alleged bite midway through the sixth, Walker was clearly riled and poured on losing for the stop, winding up a huge left but the bell sounded soon after to confirm Walker a points winner.

His Conlan Boxing stablemte, Kieran Molloy, made it three wins from three as a pro as he boxed to a comfortable points win over Georgia's Sandro Jajanidze at middleweight.

The Galway man didn't have it all his own way as Jajanidze remained competitive and landed some meaty rights, but Molloy was certainly a worthy winner, taking a 59-55 nod on all three cards.