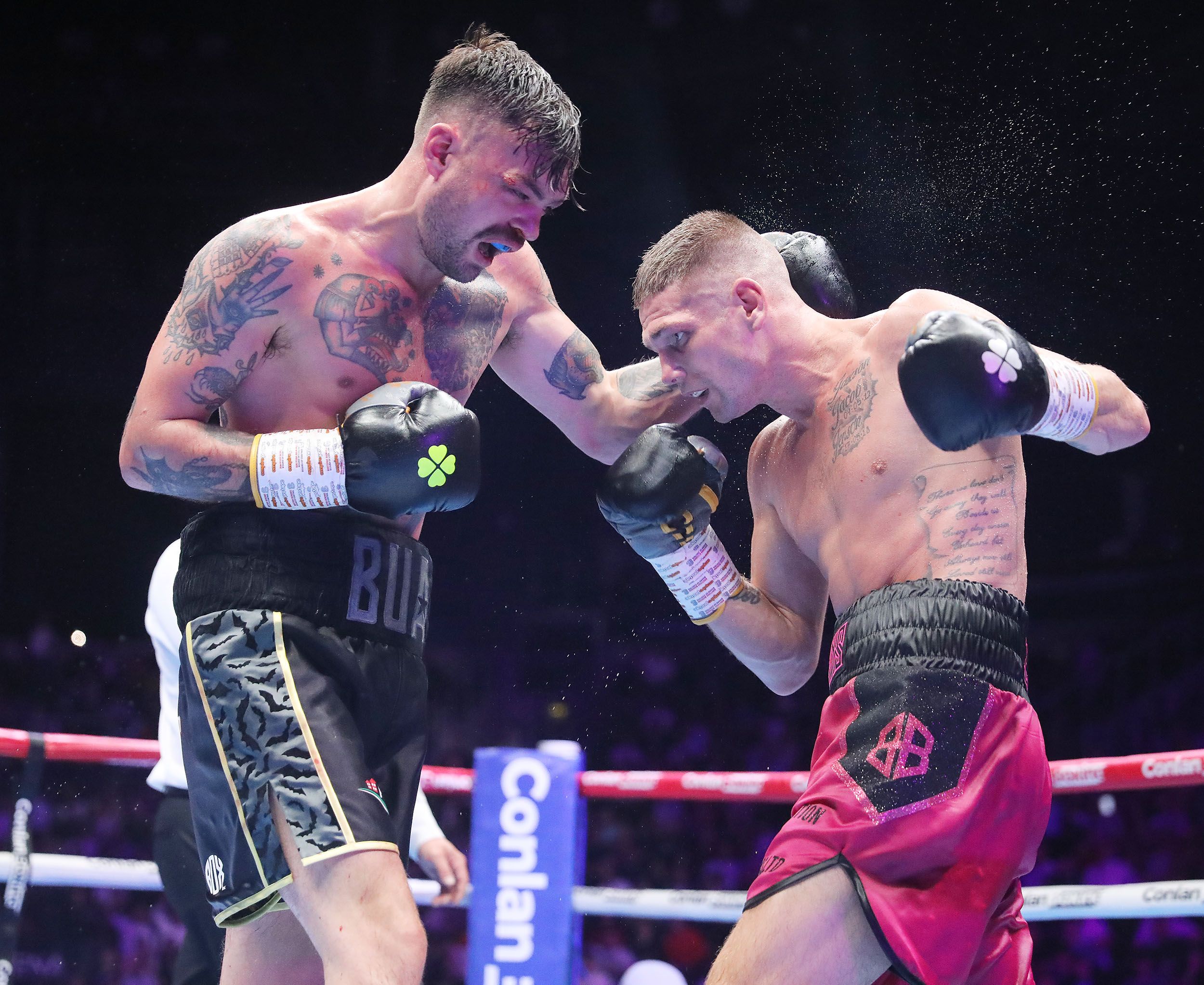 Tyrone McKenna and Chris Jenkins slug it out Jim Corr

'The Mighty Celt' - in his first fight up at welterweight - kept his promise of going to war with the Welshman and it just about paid off in a close battle.

Right from the off, both men stood and traded heavy fire with both appearing to make a dent at stages before being on the receiving end.

The bodywork of Jenkins was excellent, while McKenna stood up to these shots and ripped into the visitor.

This was an extremely close fight with the rounds competitive, McKenna began to use his reach a little more in the latter stages and did enough to squeak home.

It was another incredible night for Padraig McCrory who blasted through former world title challenger Marco Antonio Periban to retain his WBC International Silver super-middleweight title in five rounds.

This was a meeting of two heavy-hitters so it was simply a case of who could stand up to the other and it was the West Belfast man who had that x-factor, dropping Periban in the second when landing a flush right that had the Mexican buckled and just about had up by the ropes with a count rightly given.

The Mexican rose and retaliated well, hurting the Belfast man and they both tested one another's mettle in three.

A clash of heads resulted in McCrory with a nick over the left eye that would require stitches after, but while he had to absorb heavy fire at times, he raised it in the fifth with a right sending Periban down in five. This time there was nowhere to go for the visitor who was down again under heavy fire and a follow-up assault ended the argument with McCrory clearing another step up to leave him in the frame for a major opportunity next - possible against EU champion Gustave Tamba with purse bids for that fight to take place on Thursday.

"That guy drew with Badou Jack, fought for a world title against Sakio Bika and 'Pody' just did the same thing that James DeGale did to him.

"If he really wanted, he could have stopped him earlier, but he was being cautious which I don't mind. He got the jab going, set everything up which is no problem. Getting that jab to the body and head was keeping him safe."

McCrory was rejected by US TV network, Showtime, for a fight against David Lemieux a couple of years ago and the manner in which he is blasting through opponents and supposedly tough challenges makes a mockery of that decision.

Walsh is convinced his man has the tools to trouble most in the division and believes he is a much different fighter now that the version that he Nagano working with a couple of years ago.

"They'll be kicking themselves as he would have knocked David Lemieux out," he stressed.

"Pody would have brought the hammer - that right hand, done. Once he lands the right hand it's over. A few years ago David Lemieux would have had a chance, but now he would have none as Pody would knock him out cold.

"He's got the skill now to do what he wants and that's what I want to see. Two years ago I watch him spar and thought 'this is not good' but now he's different level and is proving that."

Colm Murphy claimed the vacant BUI Celtic super-featherweight title as he overwhelmed Ruadhan Farrell in the 'Battle of Belfast'.

Murphy wasted no time in getting to work, targeting the ribs of Farrell while working off a solid jab that bloodied the North Belfast man's nose and it was one-way traffic early. Farrell dug and bravely fought back at close quarters, gaining more success off the exchanges with uppercuts and as the rounds ticked, it became more competitive.

Murphy's overhand right proved a huge weapon and landed flush in the eighth and final round, as he saw it out to claim a good win in his fifth fight.

"I maybe rushed my work a bit in the first two rounds, but slowed down after," said Murphy.

"Fair play to Ruadhan Farrell - he came here to beat me and it takes two to tango, but I thought I nicked all the rounds.

"That was my first eight-rounder and I came through against an unbeaten pro, so there's a lot of positives to take away.

"I loaded up too much at times, but it's a learning curve. That's a first year and chapter done and dusted, so hopefully we can get better."

Farrell could be proud of his performance as he remained right in the hunt and has plenty of time to rebuild given this fight happened so early in his career.

He said: "I thought I could have done a bit better, but it is what it is and the better man won."

Kurt Walker proved the lights were not too bright against Marcos Martinez as he stepped up seamlessly with a convincing points win. The Lisburn man - fighting at home for the first time since 2014 - was a class above, his movement and shot selection just too much for the visitor.

"I was only in second gear there," he said.

"We were working on things in camp and I was trying to implement them as best I could. There's lots of improvement to do, but that's my best performance yet.

"I thought he would have slowed down in the third round, but he didn't. He was tough and taking good body shots and uppercuts, but that's what I need.

"I'm working on my strength and soon I'm going to start hurting people. It won't happen straight away from being an amateur so long, but it's going to come."

Fearghus Quinn opened the night with a routine points win over Octavian Gratti, while Sean McComb and Paddy Donovan prevailed, as did Kieran Molloy against Evgenii Vazem.