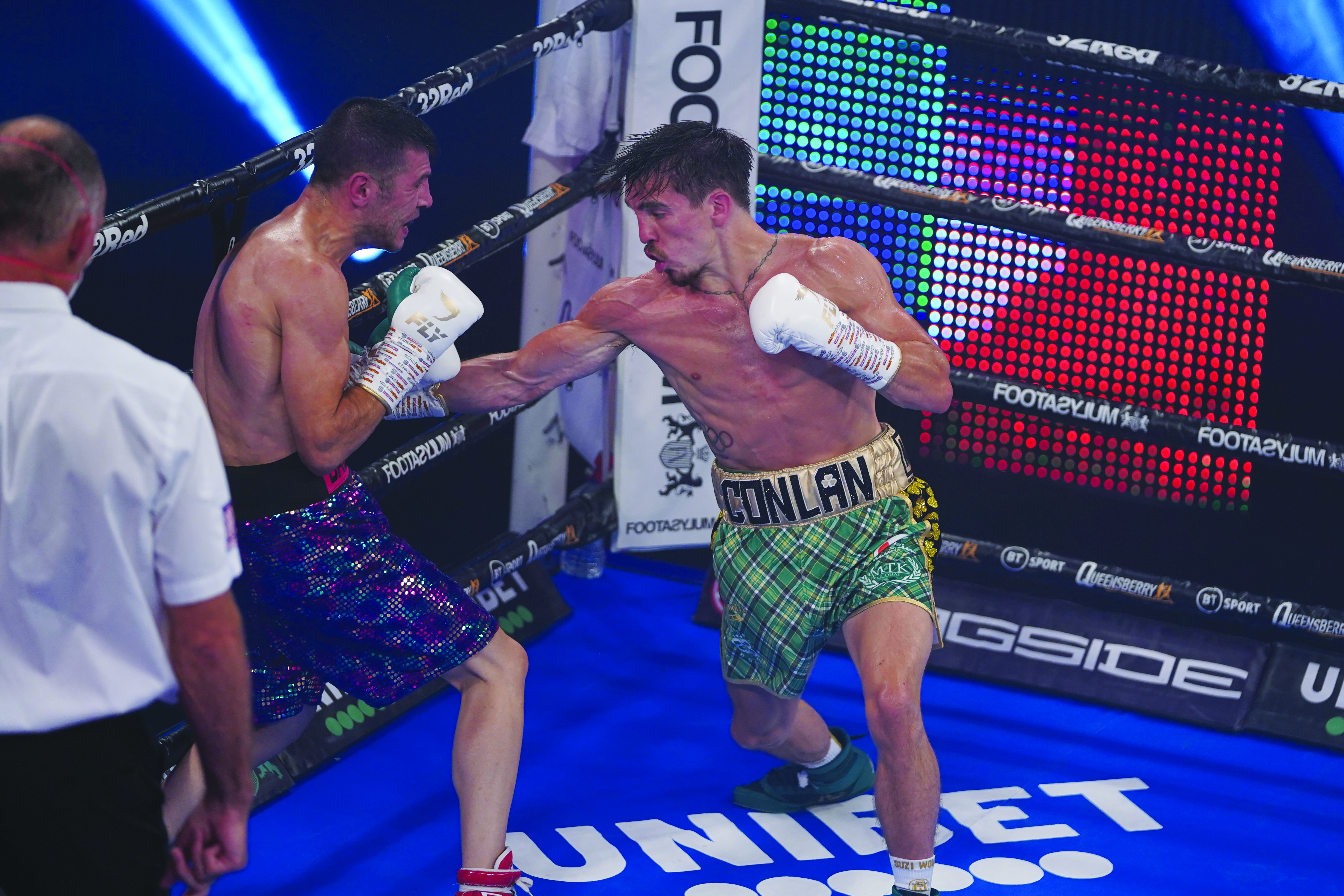 WARY but not worried. That is the message from Michael Conlan as he prepares to face Ionut Baluta at London’s York Hall with a world super-bantamweight title shot coming into view (Friday, live on BT Sport).

The Romanian has been on a rich run of form, defeating former world champion TJ Doheny in an upset win last March before claiming the WBO European title with a third-round stoppage over David Oliver Joyce in September, so will be aiming to make it an Irish hat-trick at the York Hall tonight.

However, Conlan is in no mood to contemplate such a prospect and has vowed to make a huge statement that will sound a warning to the title holders in the 122lb division.

To do that, he has prepared well and fully recovered from an ankle injury that put the kibosh on a planned December 5 outing against Isaac Dogboe, so is full of confidence he will put an end to Baluta’s recent uprising and take another huge step towards a crack at the big one that would likely take place towards the end of the year.

“I know what he’s about and what he’s done,” said the 29-year-old West Belfast man who has won 14 out of 14 professional contests.

“He’s ready to upset the applecart again and will believe he can, but I’m feeling good. I’m not just preparing for Baluta, I’m preparing for future fights and he’s just a guy I have to beat along the way.

“I’m going to go in there very confident and very happy about what I’m going to do, so I’m excited for what’s going to happen.”

Baluta has an aggressive, all-action style so will likely let his hands go from the opening bell and does carry pop in his shots despite his record of three stoppages in 14 wins with two defeats suggesting otherwise.

Conlan has been working on his own power shots in preparation but that does not mean he will meet the 27-year-old Romanian in the centre of the ring for a tear-up.

Instead, he will likely use his boxing skills, either out of the orthodox or southpaw stance where he is equally adept, to create the openings to land heavy fire and is predicting a stoppage win.

In his last outing against Sofiane Takoucht last August, there was a noticeable mean streak in his work as he broke the Frenchman down to win in the 10th and final round.
He feels he has built on that win in preparation and will deliver a performance to match.

“It’s all starting to come together and things are working out really well,” he reports.

“Even in the gym, how I’m performing I feel I’m punching much harder and can do things an awful lot better.

“In this fight, I’m focussing on KOing this guy; I want to knock him clean out and that’s no joke. I’m aiming to knock him out, so I’ve been focussing on a lot of power shots, working on my power and I think you’ll see it in there. I really think a knockout is going to come.”

Having dropped down to the super-bantamweight division, Conlan ought to enjoy a huge size difference but boiling down to 122lbs for the first time in four years will have required him to prepare properly in order to be strong at the weight.

In some ways, the ankle injury that kept him out of the ring in December may have been a blessing in disguise as it gave him more time to make the right adjustments over a longer period to shed the extra pounds in a healthy way.

At Thursday's weigh-in, Conlan came in one ounce under the limit with Baluta making 122lbs exactly, before both engaged in a little verbal sparring ahead of fight night.

We can't wait for this one!@MickConlan11 and Ionut Baluta get up close and personal.

“It’s been perfect in terms of how my body needs to adjust to get down,” he said of the longer than expected time out of the ring.

“If I had have boxed in December (against Dogboe) it may have been a bit soon to be going down to 122 in such a big fight as well.

“The fact this has given me a little bit more time and space to bring my body down is much healthier. It would have been ok for that date (December 5) but this is just making sure that everything is just ticked and this is why I’m excited.”

Conlan will act as chief support on the night to Sunny Edwards’ bid to claim the IBF world flyweight title against Moruti Mthalane, so will enjoy good numbers tuning in on both sides of the Atlantic with the BT Sport card also shown live by ESPN in the United States.

An impressive win will announce his arrival as a major player at super-bantamweight with his status of mandatory challenger to WBO champion Stephen Fulton anticipated to be confirmed should he prevail.

The American will fight the winner of the WBC showdown between Luis Nery and Brandon Figueroa in a September unification, so Conlan could end up fighting for two belts before Christmas should all work out.

The WBA and IBF versions of the title are held by none other than Murodjon Akhmadaliev, the man who he beat in the 2015 World amateur final, so a rematch for the pro titles could also appeal.

However, before he gets to that, there is a major piece of business to take care of on Friday and the Falls Road man is determined to do it in style.

“I want to start making little statements now,” he added.

“What’s going to happen will happen, but I definitely will fight for the world title, so it doesn’t matter what happens so long as I keep winning. I just want to go out there and put on a show.

“There are people betting against me this time and people thinking I’m going to lose, so that is good.

“I think I’ve beaten better guys than him already, so I just need to be prepared for whatever he brings and I know I have ticked all the boxes (in preparation) so that’s why I’m excited for what’s going to happen and what I am going to bring out of myself. I genuinely think I will get him out of there in under eight, so I’m excited for it.

“I believe I’ll go in and put on a dominant and spectacular performance. That’s what I’m aiming for - to put on a career-best one and then move onto the next.”