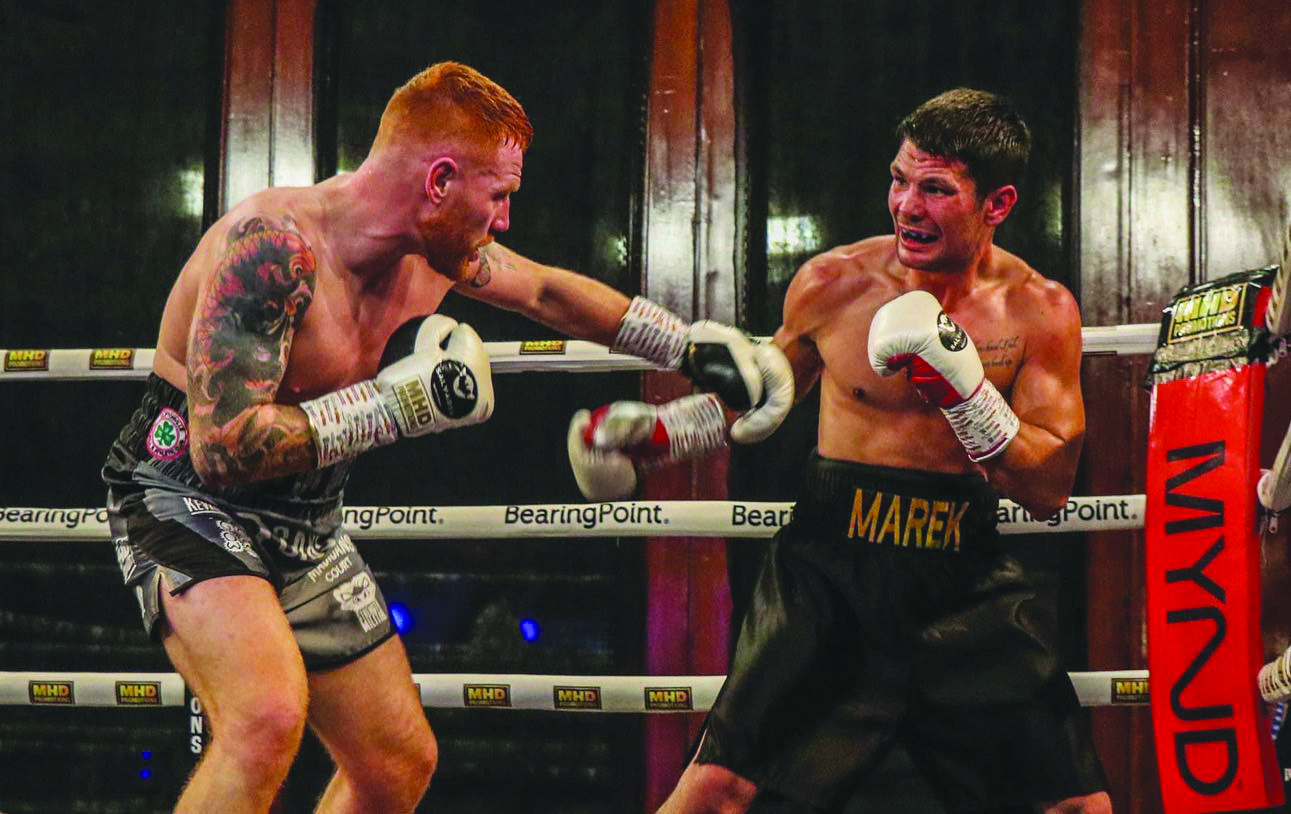 A FIRST professional title is on the line at Girdwood Community Hub on Saturday night for Owen O’Neill and Owen Duffy as they meet to decide the destination of the BUI Celtic light-middleweight strap.

The TG4 cameras are in town once again for the six-fight card that will also see Colm Murphy defend his BUI Celtic featherweight strap against Liam Gaynor, but it will be a huge night for North Belfast’s O’Neill who will feel right at home for the chance that he has craved.

Over the past year, potential breakout fights have fallen by the wayside that was no fault of the 27-year-old ‘Operator’, but in this, his 10th pro outing, he now has the opportunity to throw down in an Irish derby and ensure it’s career lift-off.

Last time out, O’Neill was so close to a first stoppage win when dominating Marek Laskowski on a night he was initially due to face Dublin’s Martin Quinn, but after that win he and Duffy were deep in conversation behind the scenes and a meeting between the pair seemed likely.

“I had a week off and then straight back into the gym,” he said of September’s win at the Europa Hotel.

“It’s a dream come true to be fighting for a Celtic title and about time (had a big 50/50) as the Latimer fight fell through and then Marty Quinn the last time.

“I have waited long enough for a title and now I’m ready to go in and prove I can win them.”

On the same night O’Neill was cutting a swathe through Laskowski, Duffy was involved in a small hall classic against fellow-Cavan fighter Dominic Donegan when picking himself off the floor from an early knockdown to stop his rival with a body shot in the fifth, improving his record to 6-2.

@MARKHDUNLOP putting on another good show this Saturday in Belfast.

Plenty of good talent on show 👊

“He was dropped in the second round but showed some grit to get up and stop Dominic,” O’Neill noted.

“It shows he has serious grit to continue, so I know it’s going to be a hard fight but one I know I have the skills to win.”

Duffy is a southpaw and more natural at light-middleweight, so in some ways, ‘The Butcher’ hods advantages heading into this fight, yet he has also shown vulnerabilities as he was stopped by Eddie Treacy in the past and out-pointed by Jake Best.

Although O’Neill is yet to win inside the distance, he is a vastly improved fighter and against Laskowski looked heavy-handed, especially with his body attack.

This fight has all the ingredients to be a thrilling battle with both men happy to engage and both will be tested as both are yet to go beyond six rounds.

But O’Neill believes he has ticked all the boxes in preparation and is ready for what is going to come his way having banked the experience of his first nine contests.

“I have to move up to super-welter for this, but it is too good an opportunity to turn down,” he insists.

“This is the chance for a first title so I had to take it and one I believe I can win. This is my first eight-rounder but I think that as the rounds go on, I get better.

“The last fight (against Leskowski) I wasn’t tiring, so the fitness side will be an advantage due to my style of walking people down, so that will cause problems.

“I learnt from that as once I dropped him I was looking for it (finish) too much and for reckless. I’m glad it happened as I won’t be doing that again. If I drop someone I will just take my time, relax and work on things.”

Tickets for Saturday’s show can be purchased on the door