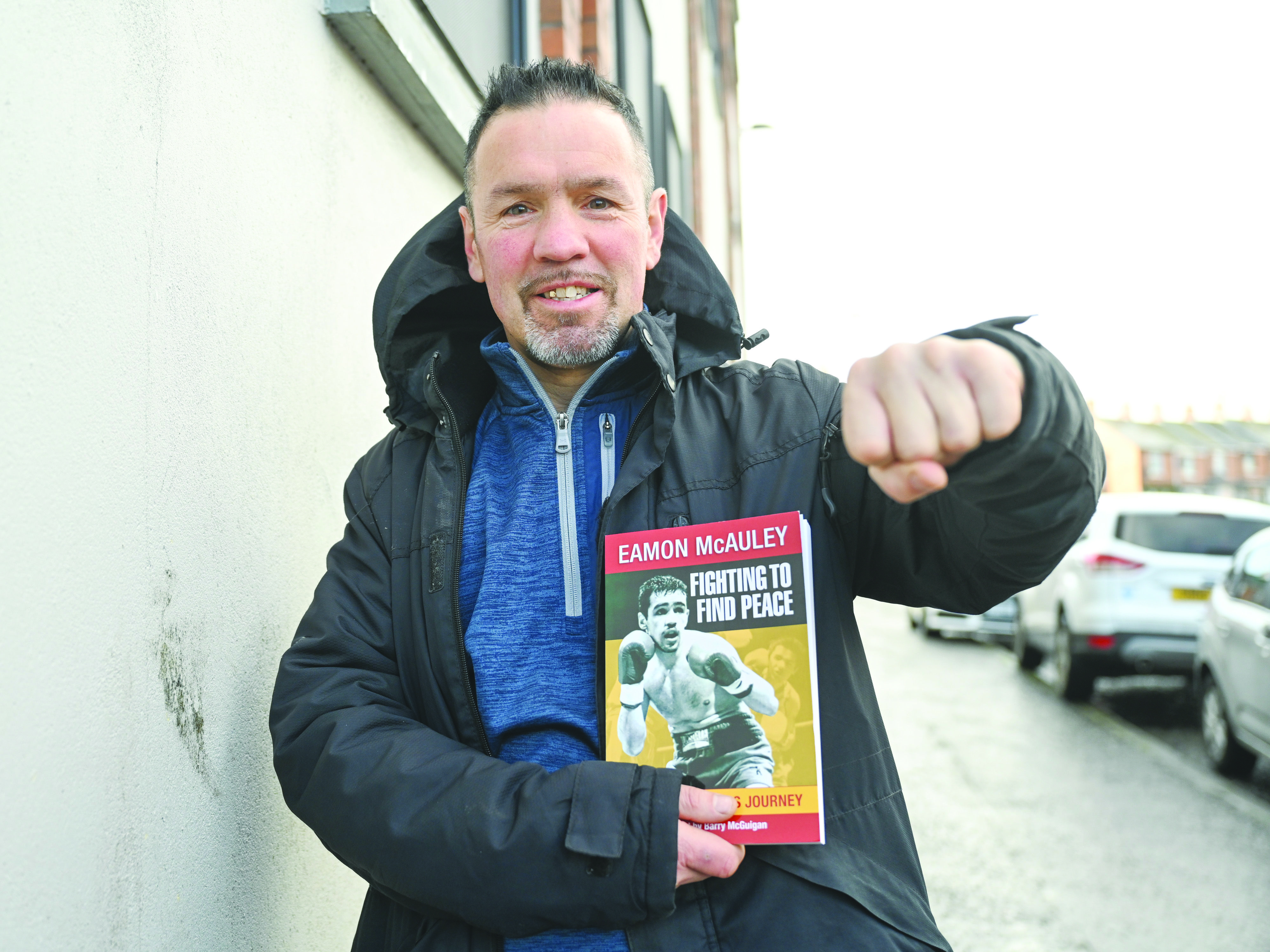 “This is not just a boxing book, but the story of my life.”

EAMON McAuley had quite a lot to live up to. Son of Ardoyne hard-man Patsy ‘Coco’ McAuley and grand-nephew of the famous Rinty Monaghan, fighting was most certainly in the blood.

From a teenage tearaway to ABA champion, professional pugilist to committed vegan, McAuley has quite a story to tell and on Sunday at the Crumlin Star social club in Ardoyne, he launched his book: ‘Fighting to find Peace’.

McAuley developed a love of writing from scribbling in notebooks, amassing a huge trove of information that prompted him to write a book, the inspiration for it his father whose fights took place on the streets rather than the squared circle.

Coco’s legend lives on in North Belfast and beyond, but Eamon would chart his own path and has crammed a great deal into his 56 years, so putting it all out there just seemed a logical step.

He explained: “I find writing very therapeutic, and I’d have notebooks where I would scribble and scribble: top 10 tennis players; top 10 middleweight boxers...

“When I would fill it up, I’d get another one and fill that, so I’d been doing that for years.

“I wrote a lot of stories for a community magazine ‘The Horizon’, so I’ve a real passion for writing and started about growing up in Ardoyne and about my da, so that’s how the book came about.”

*****
Born in 1966 and beginning his transition from child to adolescent in the 1970s, street games in Ardoyne involved hopping lorries and chasing rubber bullets.
Street smarts were essential as the conflict raged, its tentacles reaching into every street and family in Ardoyne.

Coco McAuley was no stranger to street conflict and his foes came from right across society: shot by both Loyalists and Republicans, blown-up, stabbed and beaten, yet his local legend was formed by his run-ins with paratroopers who he would constantly get the better of.

As fate would have it, Eamon would end up tangling with a para, Carl Crook, in the final of the ABAs, but his father’s battles were fought a long way from the Marquess of Queensberry rules.

“My da was well-known for fighting with the Paras.

“They couldn’t get one to beat him, so they flew in a regimental boxing champion from Germany.

“There used to be graffiti on Herbert Street: ‘Coco rules the Paras’, but the irony was that I ended up in the ABA finals and who was I up against? A paratrooper.

“The pressure I was under with my da being known for beating them, plus the pain and hurt they caused to this community, if I had lost I’d still have it cast up to me.”

Coco was a thorn in the side of many in Belfast and attempts to keep him in check would fall well short as his survival instincts ensured he walked away from situations where many others would have perished.

“My da was shot three times and there are photos of a car that was blown up he walked out of that you wouldn’t believe anyone could walk away from,” Eamon continued.

“The car was parked opposite and it killed two people, blew a guy’s head off into a garden - Sean Campbell, God have mercy on him.

“He was shot, the IRA beat his hands with a hammer. He had stab wounds, bottle wounds - a real brutal life.

“A lot of people tried to use the cover of the IRA to get to my da, but he always walked away from it.

“They tried to wipe him out in ‘73 on Pilot Street in the docks, shot him in the stomach and in the foot, then he was shot at again by Loyalists in 1988 in the Avenue Bar when three people were shot dead.

“In Eamonn Magee’s book, Eamonn said he wanted to be just like my da, an Ardoyne legend who was the hardest man in Belfast. All that is why I wanted to write the book for him.”

*****
Eamon was no shrinking violet as a teen, getting caught up in anti-social behaviour, but the sweet science was in the blood and soon he found himself attracted to the boxing gym at Sacred Heart ABC.

His uncle Gerard remains a coach in Ligoniel having taken over from previous coach, Terry McCaffrey, who was shot dead in 1973.

But a young Eamon was displaying talent and with his ‘uncle Rinty’ a former world champion, perhaps it was in the DNA.

However, his own scrapes on the streets on to of death threats made to his father prompted Coco to pack his son off to England and it was there he would forge his own path that would culminate in a piece of history as only the second man from Belfast since Jack Gartland in 1928 to win a covered ABA title, beating Crook in a thrilling battle at Wembley Arena in May 1985.

“My da saw that I had a bit of talent for boxing, but he was getting death threats and was worried they might take it out on me.

“Plus, I was getting to trouble at the time: joyriding, sniffing glue, coming in with drink on me and things like that. I was 16 then, so my da sent me over to his brother, Gerard, in Manchester where I lived for 18 months before going down to London for another 18 months.

“I had the good fortune to go into the Hogarth Boxing Club and that’s where I met Harry Holland. On my first night in the gym, I told him I was a national champion, so he took me into spar Billy Hardy.”

Sunderland’s Hardy would enjoy a fine boxing career as a pro, claiming British, Commonwealth and European titles, while challenging for world honours at bantamweight and again at featherweight, losing the latter to ‘Prince’ Naseem Hamed.

“The first night I was there, I dropped Billy and Harry’s eyes lit up, so I was given the star treatment after that.

“I have to say I sparred Billy Hardy many times and never came close to dropping him again, but that sparing against him and Rocky Kelly, the number one welterweight contender for the British title, brought me on no end. I won 29 of my last 30 fights.”

His accomplishments had not gone unnoticed in his native Belfast.

Barney Eastwood’s Castle Street gym was the place to be in the 1980s and his stable boasted a host of world champions including Barry McGuigan who was riding the crest of a wave.

‘BJ’ liked what he saw of the young North Belfast man and would woo him with tickets to McGuigan’s world title victory over Eusebio Pedroza at Loftus Road on am night that has gone down in history, while also enticing him to put pen to paper with a £6000 signing-on fee - not the done thing at the time.

McAuley would make his debut at the same venue he won the ABA title a year previous with a points win over Dean Bramhald over six rounds and cut through his next five opponents before tasting defeat at the Ulster Hall in 1987 when an ankle injury forced him to retire in the third round with a damaged ankle.

This would be a devastating loss as he didn’t fight for another two years, and while he would record another five professional victories over the course of as many years, changes to his lifestyle would ultimately spell the end.

“Being vegetarian ended my career, but I don’t regret it,” he insists.

“In 1987, I was on a bit of a one-man crusade as a vegetarian because I didn’t know any others. I wasn’t subsidising and getting the nutrients I should have been, so I lost my power and eventually my confidence.

“I’m fit now, still run and still do the doors, so that’s why I keep fit.

“I’m strong now as I know how to get then nutrients and subsidies: iron, calcium, protein and all that, but I didn’t back then.

“If you look at my last few fights on YouTube, I look skinny, gaunt and I’m just not punching hard. I was renowned for being a very hard puncher, just like my da, just like Rinty.”

McAuley still retains a strong bond with McGuigan who he counts as a close friend, recalling the magical times of the 1980s, but as ‘Barry-mania’ faded, so did McAuley’s days as a prizefighter.

There were battles with his mental health, admitting he suffered breakdowns with a loss of confidence and self-esteem.

Under the bright lights McAuley thrived, but away from the ring his confidence wasn’t the same.

He still does the doors at various nightspots in Belfast and was instrumental in having the statue of Rinty erected beside St Anne’s Cathedral as part of the Belfast Boxing Ring group.

While his career didn’t quite reach its potential, he is still involved I the sport as a coach at St John Bosco, helping inspire the next generation.

“I like to stay in the background, so you wouldn’t really see me on the circuit, but I’m up in the gym training the kids,” he explains.

“With the suicide epidemic we have, mental health issues, a boxing coach is also a social worker, a father figure, a counsellor. Boxing coaches are unsung heroes who do it for the love of boxing and for the love of their community - not for the money.”

*****
Away from boxing, Eamon has continued his fight, but for inner peace rather than titles.

His faith in God has helped him remain on the right path and while admitting life can throw up its challenges, he has found a deeper meaning through Cursillo - an apostolic movement in Catholicism that involves a three-day period of spiritual renewal stressing the dynamic, communitarian, and personalistic aspects of the Christian faith.

“I’ve a good faith in God and have had some obstacles to get over in my life.

“I’ve got my health and got my fitness. Many of the guys I went to school with are dead now or they’re alcoholics, on walking sticks or wheelchairs.

“I’m 56 now and in good shape, mentally physically and spiritually, sponsored praise the Lord for that.

“I’d have been that Cursillo called a ‘mechanical Christian’ where I went to chapel more by habit and wasn’t participating.

“But when I did Cursillo in 1995, that blew me away and I wanted to get back and serve God. I’ve been a part of Cursillo now for over 20 years and the has been mind-blowing - the reason why I am where I am today.”

His journey led him to the clubrooms at Crumlin Star on Sunday when friends, family, fellow ex-boxers and well-wishers gathered for the launch of his book that charts quite a tale.

Eamon McAuley may not have reached the heights he had dreamed of in boxing, but his journey was about so much more than that.