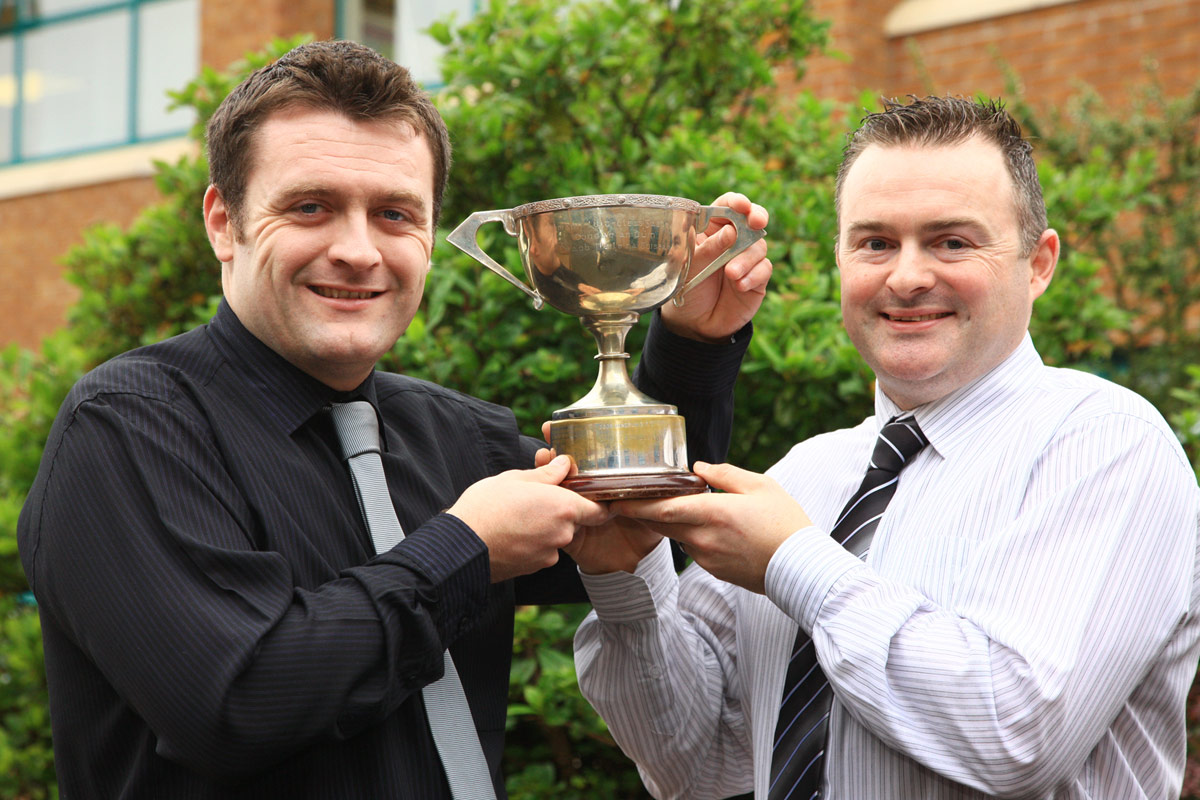 BREDAGH lifted the Down Junior Football Championship with a comprehensive 4-10 to 0-9 victory over Dromara at a damp Pairc Esler on Sunday.

This is the first time the South Belfast men have claimed the title since their maiden success back in 2006 and they will now enter the Ulster Junior Championship on October 30 when they will play the Donegal champions.

Bredagh opened the scoring with a John McKenna point but seconds later, Dromara were dealt a heavy blow through the loss of midfielder Kieran Kelly.

However, the West Down men made good use of limited possession to open up a three-point gap before Donal Hughes grabbed the game by the scruff of the neck.

Having already recorded two fine points from play, he latched on to a Niall Mulholland through-ball to score a vital goal before half time.

On the restart Dromara showed they were up for the fight but that man Hughes struck again in the 38th minute when he punched to the net.

Bredagh consolidated their lead with strong play from Paddy Willis, Henry Deazley and Brian Rice before the Down senior hurler grabbed his hat- trick following good work by Kevin Harte.

Sean Armstrong pulled off a fine save to deny Dromara and Hughes then turned provider for Mulholland to record a major score, a just reward for his battling performance at centre forward.

The last score of the game, like the first, came from the impressive McKenna and captain Mark Robinson took the cup home to Bredagh for only the second time in the club’s 40-year history.

Team manager Michael O’Callaghan said he was thrilled with the victory and said it was all the more special as this year marks the ‘Ruby Anniversary’ of the club.

“I am absolutely delighted. It was a fantastic achievement so we are over the moon. It was great to see so many Bredagh supporters down at Newry so it was a great occasion,” he said.

“It is a big boost for the club and it was great to have everybody there that was involved in it.

“It’s the 40th anniversary of the club this year so it will be nice to have a big do coming up in Queen’s and it’s nice to have something to bring along to it.”

While they can now look forward to the provincial campaign, O’Callaghan said their primary focus is on a meeting with Drumaness at Bright this Saturday (2pm) in a promotion play-off for a place in Division 3 next year.

While confidence will be sky-high following Sunday’s Championship triumph, the Bredagh manager admits his side will face a sterner test and one they must come through if they are to continue making progress.

“Ulster will be another test but we have a big game coming up on Saturday against Drumaness in a play-off to get up into Division 3,” he added.

“We will be concentrating on that first because there is no point in winning a Championship if we are going to be stuck in Division 4 next year.

“You want to get up and out of Division 4 so we are playing at a higher standard and that will help push the boys on for next year when we are into the Intermediate.

“It’s a big test on Saturday against Drumaness at Bright and then we can worry about the Ulster Championship after that.

“We play the Donegal winners but we are more concerned with the league.

“We are on a great unbeaten run but Drumaness are a great team themselves. There are just two points separating ourselves and Saul at the top of the table and we have both beaten each other once this year so it’s going to be tight.