Bronagh powering through to the Worlds 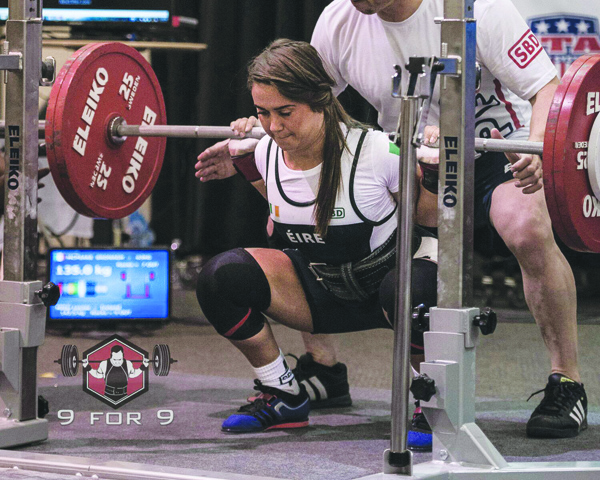 Bronagh in action during the 2016 World Championships in Texas

HAVING cemented her status as an Irish champion, Andersonstown girl, Bronagh McPeake is eyeing success on the global stage at this summer’s World Classic Powerlifting Championships in Calgary, Canada.
The 25 year-old daycare supervisor has enjoyed an incredible rise to prominence in just three years competing in the sport, but hopes there is much more to come this year.
In Dublin two weeks ago, the former St Genevieve’s pupil claimed her third Irish title in as many years,this time at the higher weight category of 72kg than the 63kg class she usually competes in. It was yet another barrier broken for the affable West Belfast girl who lifted some huge weights in the process with a 200kg deadlift, 173kg squat and benched 87 kg.
“I really hardened myself for them and toughened myself up there,” she said.
“In my first year I was national champion. That was 2016 and I have also been national champion in 2017 and just there for 2018, so that’s three years running in two different weight classes. I went up to the heavier weight of 72 kilos as I weighed in heavy.
“Usually I would cut (weight) to 63, but this time I was 65 so had to go for the heavier weight class and I won that last weekend.”
Bronagh trains out of Strength Militia at Kennedy Way Industrial Estate with her coach, Sean Crowe, but her introduction to powerlifting came from a simple trip to the gym where a simple workout opened the door to greater possibilities.
“I was just a normal gym-goer, going to the cardio classes and circuits,” added the Irish champion.
“I bumped into a guy who was going to strength training and it all went from there.
“We were just messing around and seeing how much I could put on the three lifts – squats, bench and deadlifts.
“He was saying that some of the weights I was already lifting were records within Northern Ireland, so he talked me into doing a wee competition.”
That initial competition at the Valley Leisure Centre did not go as hoped.
With three attempts allowed in the categories – bench,squat and deadlift – failing all three squats left her disqualified from that category and while she did complete the other two, she was unable to register a total.
However, like any top sportsperson, it was merely a blip as Bronagh returned to the gym and started preparing for the next competition.
“That just made me more determined to get back and get into the next competition I possibly could.
“I remember first off putting 80 (kgs) on the bar for a squat and being really nervous about it, not knowing if I was going to get it.
“In my next competition I’m about to do here I will be hoping to lift 180.”
While it was natural talent that first got Bronagh introduced to powerlifting, it has been hard work that has ensured the honours have followed.
There are no cutting corners in her meticulous preparations ahead of competitions with a number of boxes to be ticked.
“I would finish work at 5pm then head to the gym around 6.30pm and not leave until around 9.30pm,” she explained.
“That would be five nights a week, three hours in the gym. You have to be really into it.
“In the 63kg weight class, my body weight just can’t be any more than 63kgs so I would be making sure I wouldn’t be eating too much of the bad food.
“I obviously need my carbs, but I also need to make sure I don’t overindulge in stuff, so I need to get my protein in and my healthy fats.”
That hard work has reaped dividends with Irish titles in 2016, 2017 and 2018. The next target is Calgary this summer and the opportunity to build on her first foray onto the world stage two years ago.
Not just happy to go along for the experience, Bronagh has set herself targets and the hard work has already begun for what she hopes is another podium place,m this time on the biggest stage.
“I was at the Worlds in Texas back in 2016. I was nowhere near the podium back then, but the Worlds are coming up this June in Calgary, Canada so we are all gunning for that,” she reports.
“We’re back in the gym now and have started training for that.
“We have the numbers we want to lift at the Worlds so then we will have to do the training around the numbers I want.”
Success in Calgary would be a phenomenal achievement for the Andersonstown girl who has enjoyed a meteoric rise in her sport with her achievements acting as inspiration to other females in Belfast and beyond who may feel they have the ability to compete at the highest level.
“Girls are now more open to it and there are some looking over at the weights now in the gym rather than running away,” she notes.
“I love to hear about the girls going to the weight areas and maybe intimidation some of the men!”