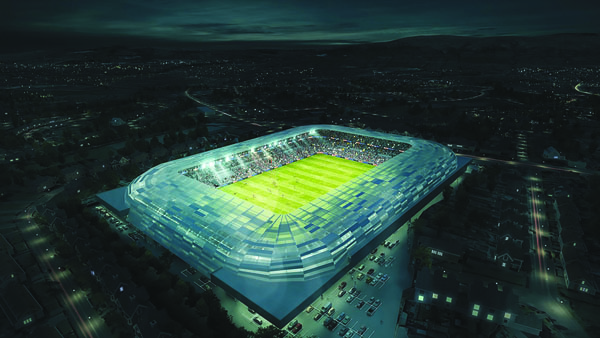 THE closure of Casement Park and the subsequent delay in securing planning permission for its redevelopment has done untold damage to the prospects of Antrim GAA according to Paddy McBride.

Speaking ahead of Sunday’s Allianz Football League opener against Wexford in Glenavy, McBride feels that not having a permanent base has had an adverse effect on young people being involved in Gaelic Games.

With the Stormont Executive now back up and running, there is fresh hope that the planning issues surrounding Casement can be resolved.

As a schoolteacher at Coláiste Feirste, McBride can cast an envious glance over the city to the redeveloped Windsor Park from his workplace and he said it is long overdue that Antrim GAA had their own state-of-the-art stadium.

“I made my first Championship start for Antrim against Monaghan in 2013 in Casement Park,” stated McBride.

“I think everyone in Belfast is keen to see it resolved and Gaels throughout Ulster and Ireland want to see it back up and running again. I’d say it has had a negative influence in participation in Gaelic Games.

“At work, I can look out the window at see Windsor (Park) and it looks class.

“I can just imagine kids coming out of school and walking up the road and seeing the lights of Casement on a Wednesday night or on a Saturday night for a league game – it would be brilliant.”

Ever since the gates of the famous West Belfast stadium were closed following the 2013 season, Antrim GAA have used various grounds throughout the county for inter-county football and hurling.

Corrigan Park has been the main home for the footballers in recent times with Dunloy, Cushendall and Ballycastle hosting senior hurling games.

This year, Loughgiel will host the hurling with Glenavy used as the base for the footballers with redevelopment work is set to start in the coming weeks at Corrigan Park. Ahoghill also hosted Antrim’s Dr McKenna Cup win over Fermanagh earlier this month.

Despite their nomadic existence in recent times, McBride says the challenge for the current squad is to make Glenavy a fortress and to maximise the fact that they’ve four home games from seven in the league this season.

“For now, the important thing is to try and make Glenavy a fortress for the league. When we were in St John’s we had a good record there,” said McBride.

“It was obviously handy enough for me to play games there!

“We have to make our home a hard place for visiting teams to come to. We need to get out of Division Four – it doesn’t matter what pitch in Antrim we play on.
“It is hard not having that base, but can’t keep using Casement as an excuse at the same time.

“We are all used to playing games at Glenavy. It hosts a lot of Championship games there and we will be training on it before the Wexford game.

“It has been one of the best build-ups to a league campaign in a number of years. I know the last few years has been disappointing because we didn’t get promoted. I think this year we are in a good place compared to previous years.

“There is a good buzz in the camp and we got a good win over Fermanagh in the McKenna Cup and that gave us a boost. The first game is the one we are looking forward to.”