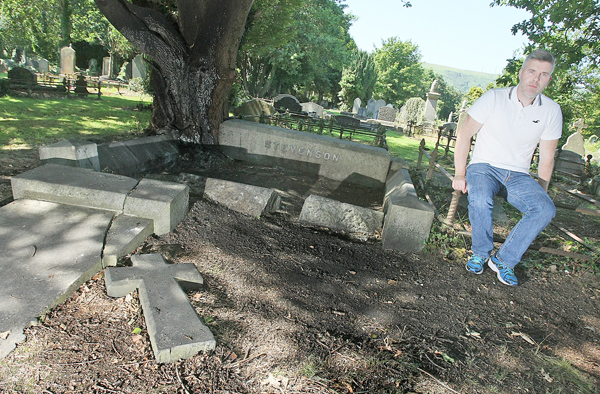 A LOCAL councillor has hit out at mindless thugs who are using the City Cemetery as a party area at the weekend.

Councillor Stevie Corr has said those responsible for the wanton destruction of graves at the weekend should take a long hard look at themselves.

Speaking out after severe damage was caused to some graves, Cllr Corr said: “It is ridiculous to think that you can’t even get peace in death.

“If this was Glasnevin Cemetery it wouldn’t have happened because they have twenty four hour security. If you are caught trespassing, drinking or causing damage there you would face charges, but it’s ok to carry on like that here in West Belfast? It beggars belief, it’s absolutely disgusting.”

Over the course of the weekend a bin was stolen and set alight on a family plot, alcohol was consumed and drug paraphernalia was also found on the grave.

Cllr Corr said: “I can't get my head around the fact that some of our local community would steal a wheelie bin, drag it into the cemetery and set it alight on a family plot. Even tyres had been burnt on one of the graves.

“Last year there was uproar, and rightly so, when the Jewish section of the cemetery was attacked, it was described as a hate crime, well I think that this is also a hate crime, it’s anti-Christian.

“They’ve kicked the surround off the grave, lit a fire, drunk alcohol and taken drugs, I can’t believe it, it’s disgusting. There’s never been a prosecution against the mindless thugs who do this week in and week out in our cemeteries.

“We need to have innovative ideas around how we are going to tackle this, our cemetery staff are pushed to their limits as it is, they are the people who know this place inside out, we should be asking them for suggestions.”

Cllr Corr said that ultimately the responsibility lies with parents. “We can put all the security in the world in place here but at the end of the day it boils down to parental responsibility.

“If your kids are coming home at the weekend stinking of smoke, there might be a clue there as to where they have been. We have been given a few names, but it’s all about adults as well as underage drinkers coming into the cemetery with their carry-outs, it needs to be knocked on the head.”

He added: “It’s a disaster waiting to happen, something bad is going to happen in here, we don’t want another kid to become a statistic, parents need to be more responsible.”