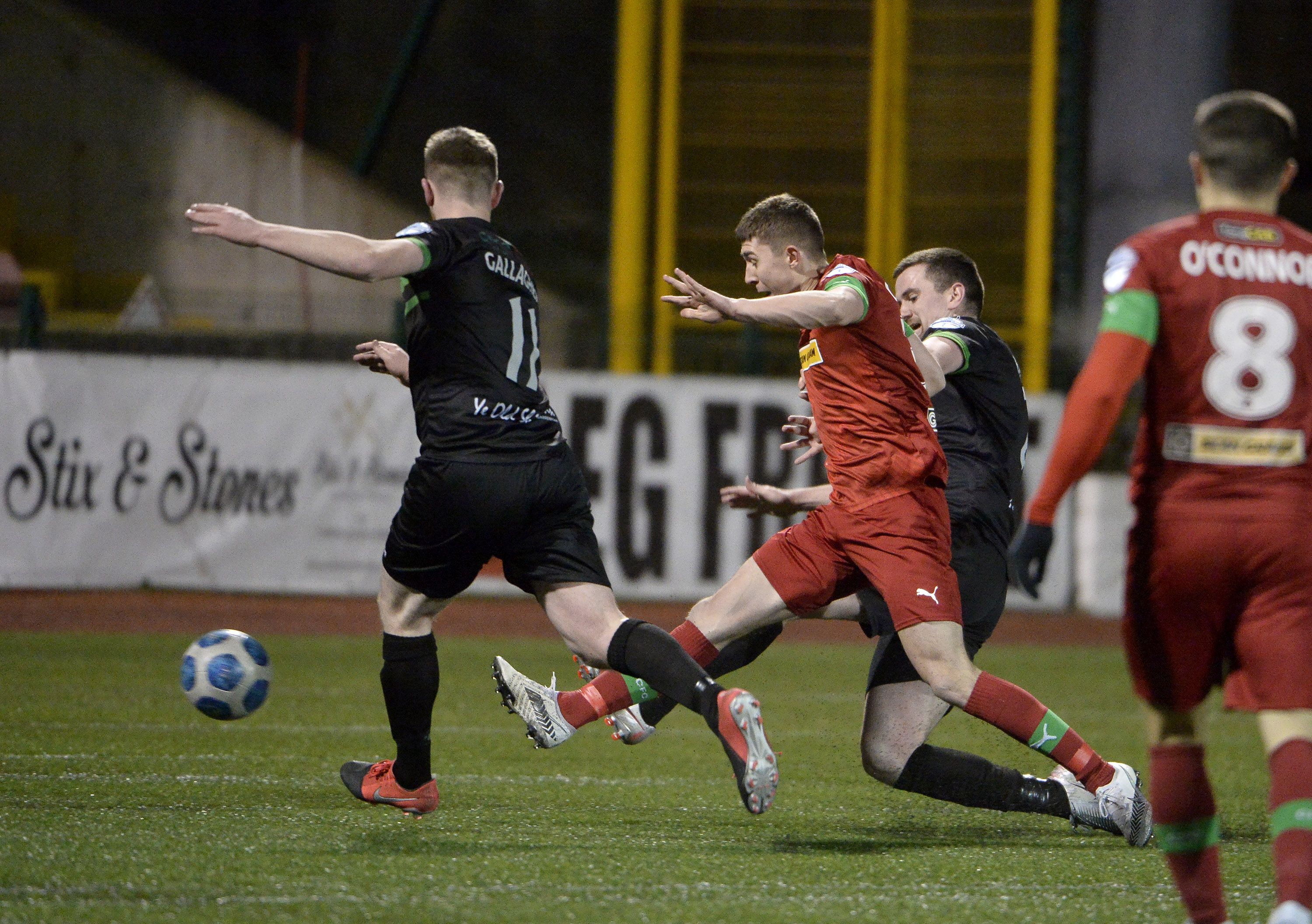 There was a hint of déjà vu in the air at Solitude on Tuesday evening as Cliftonville claimed a second 3-0 win over Warrenpoint Town this season.

Despite being outplayed for the first quarter of the game, Ryan Curran headed Cliftonville into a rather undeserved first-half lead and a goal from Paul O’Neill on the hour-mark doubled their advantage.

Much of the aftermath chat centred around the decision to dismiss Danny Wallace and Jamie Harney with 20 minutes remaining and in injury-time Ryan Curran doubled his account for the evening to a secure what was a far from a convincing win despite what the score may suggest.

Cliftonville carved out the first opening inside of three minutes when Daniel Kearns crossed from the left and Paul O’Neill attempted to throw himself at it but went down under contact from Daniel Byrne, but subsequent penalty appeals were turned away by referee Steven Gregg.

In the aftermath it was Warrenpoint Town who took a grip on proceedings and dominated. Fra McCaffrey slipped in Ryan Swan whose first-time shot was turned behind by Aaron McCarey. The resulting corner wasn’t dealt with by the hosts and Brandon Doyle let fly with a dipping volley that wasn’t far away.

Adam Evans floated a dangerous attempt over the bar and Daniel Byrne went close from a curling free-kick.

Midway through the first-half, Ryan Swan hooked the ball towards McCaffrey who couldn’t keep his shot down and a minute later the deadlock was broken against the run of play.

Daniel Kearns and Paul O’Neill interchanged and O’Neill steered the ball into the path of Aaron Donnelly whose cross was met by Ryan Curran and Curran’s bullet-header beat Sava to make it 1-0.

The Reds almost doubled their lead moments later when Donnelly played a short corner to Ryan Curran and then proceeded to whip across to the back post where Jamie Harney headed over. The half fizzled out afterwards as Cliftonville held a slender lead at the break.

Warrenpoint were almost back on terms within minutes of the restart as Colm Deasy’s long-throw fell to Fra McCaffrey whose flicked shot came off the base of the post.

At the other end, Paul O’Neill was slipped through one-on-one with Sava but the Warrenpoint goalkeeper made a great block to deny O’Neill.

The 21-year old wasn’t to be denied on the hour mark as Cliftonville doubled their lead. It was a patient move that was started by O’Neill who played the ball infield to Liam Bagnall; Chris Curran came short and found Ronan Doherty who pierced the ball through to Ryan Curran whose flick-on was finished to the net by O’Neill for his second goal since his arrival less than two weeks ago.

Warrenpoint Town had a double chance to reduce arrears as Brandon Doyle hung up a dangerous cross that Jamie Harney headed to safety.

One minute later, Chris Curran missed the ball at the back post and Doyle had another sighting, only for Harney to head off the line.

With little over 20 minutes remaining, a flashpoint occurred as Danny Wallace appeared to catch Chris Curran with an elbow and Jamie Harney took exception.

Referee Gregg decided to issue a straight red to Wallace for the initial incident with Curran and then dismissed Harney for getting involved in the aftermath.

Kealan Dillon shot straight down the throat of McCarey a few minutes later and in injury-time, Liam Bagnall threw himself in the way of a dangerous Brandon Doyle effort that looked destined for the top corner.

But Warrenpoint were stung from the resulting corner which was cleared and with Sava out his goal Daire O’Connor picked out Ryan Curran who kept his composure and shot into the empty net to make it 3-0.

It ends a three-game winless run for Paddy McLaughlin’s side who will hope to make it back-to-back victories for only the second time this season.