CLIMATE CRISIS: How bad will the future be? 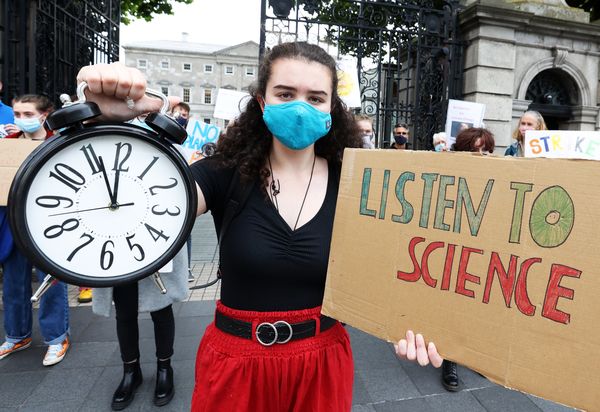 CLOCK IS TICKING: Beth Doherty of the Fridays For Future climate change protest group demonstrating outside Leinster House on Monday to mark the release of new UN report. rollingnews.ie

The Intergovernmental Panel on Climate Change (IPCC) warns that climate change is “widespread, rapid and intensifying” in its latest report released on Monday 9 August. With some variations, every part of the globe is affected by rising sea levels, changes in ocean currents and ecosystems, by more extreme rainfall patterns and flooding, intense droughts and rising land surface temperatures. Climate change is melting the ice caps, glaciers and permafrost. The climate crisis is “unequivocally” caused by human activity – the burning of fossil fuels.

It is “code red for humanity” says the UN Secretary-General Antonio Guterres. What we see now will only get worse and nobody is safe. Even under the best case scenario – “strong, rapid, and sustained reductions in greenhouse gas emissions” (mainly CO2, methane and nitrous oxide) – it will take decades for the climate to stabilise.

An 18 centimetre rise in sea levels is “virtually certain” by 2050 on the best scenario and that will grow to 38 cm by the end of the century. So when the UK’s lead on COP26, Alok Sharma, says that the key message is, “the future is not yet written”, he is quite simply wrong. The evidence of the report is that the future is written. The only question is, how bad will that future be? Sea levels could be one metre higher by the end of the century if the remaining carbon budget of 300 gigatonnes (for the best case scenario) is used up, according to the IPCC report.

This week the #IPCC released its latest #ClimateReport, #ClimateChange 2021: the Physical Science Basis.

Last year alone 32 gigatonnes of CO2 were added to the atmosphere. In a nutshell, “many changes due to past and future greenhouse gas emissions are irreversible for centuries to millennia, especially changes in the ocean, ice sheets and global sea levels.”

Climate Change 2021: the Physical Science Basis is the first of three reports which will make up the IPCC’s Sixth Assessment Report to be fully completed by next year. More than 200 scientists were involved in the report which runs to 3,950 pages. Agreeing the report is a laborious process because every one of the 195 countries that participate in the IPCC has to sign off the text of the headline summary. According to some accounts, oil rich Saudi Arabia unsuccessfully objected to some of the wording, preferring ‘greenhouse gas emissions’ to ‘carbon emissions’.

Like other countries whose economies are based on cheap fossil fuel extraction, Saudi Arabia scores poorly on the Climate Change Performance Index (CCPI) based in Germany. The CCPI ranks the 57 countries (including the Republic of Ireland) that produce over 90 per cent of global emissions. The CCPI focuses on policies and progress rather than on a country’s absolute contribution to global warming at present.

The 2021 Index shows the United States ranked last and Saudi Arabia second last. Russia is at 49 while Australia and Canada were at 51 and 55. The Republic comes in at 36, worse than China at 30. Sweden is at number one and the UK at number two, a good position from which to chair COP26 you might think.

A less benign view of the UK government’s green credentials comes from the Canada-based and UN-supported International Institute for Sustainable Development (IISD). Given that the basic issue facing the globe is how to change a carbon-based economy into a green economy — or how to shut down the fossil fuel industry asap — the IISD has developed a scorecard on fossil fuel funding. End these subsidies now, raise carbon taxes and channel the funding into renewable energy and social policy measures to cushion disruptive economic change, runs the argument. (We will discuss possible alternatives to market-based carbon taxes on another occasion.)

The IISD summarises the UK’s scorecard as follows: “The United Kingdom ranks last […] out of the G20 OECD member countries. It lacks transparency and continues to provide significant support for consumers of fossil fuels by foregoing tax revenue of USD 9.2 billion annually.”

There is no fair share of global carbon dioxide pollution. As we must get to zero global emissions as quick as possible.

This diagram shows is who has the longest way to go - USA, Canada, Australia, China, Russia, Saudia Arabia etc

According to the latest available annual figures, the UK spent $16.4 billion on fossil fuel subsidies including $2.1 billion on direct transfers and a further $12.7 billion on tax expenditures (tax relief). About one billion dollars of fossil fuel subsidy stems from the UK’s export credit agency, such as support for a liquefied natural gas terminal in Mozambique (which is in serious political trouble).

UK government is in denial

The point about transparency is that the UK government is in denial. The official position is, “the UK does not give subsidies to fossil fuels”. Others beg to differ. A 2019 report from the European Commission, using 2016 data, found that EU countries as a whole had done little to reduce subsidies to coal, gas and oil over a ten year period. The UK was found to be the worst offender, supporting fossil fuels to the tune of €12 billion compared to €8 billion for renewable energy. Germany in contrast was spending €27 billion on renewables, nearly three times its support for fossil fuels. Like the UK, Ireland (Republic of) spent more on fossil fuel subsidies than on renewables. These are domestic political choices.

At least the Republic is more transparent than the UK when it comes to fossil fuel subsidies. You will not find any information on the subject at the UK’s Office of National Statistics but you will find data at the Central Statistics Office based in Cork.

Meanwhile, neither the Irish nor British governments have produced plans for achieving net zero emissions. The UK Treasury was supposed to publish a review of net zero costs in April but has gone back to the drawing board while Johnson and Sunak sort out their relationship.

Like many countries, the Republic has a confusing and uneven mix of fossil fuel subsidies and carbon taxes. Almost a third of fossil fuel subsidies go to jet kerosene used in commercial and passenger flights (but not private planes) and another third on subsidising diesel. The effective carbon tax rate for jet kerosene in the Republic is just 8 cents per tonne of CO2 emitted, according to the CSO, whereas on diesel for road transport the rate is €183 per tonne. Petrol is €259 per tonne. Marine diesel is just €17 but diesel for trains is at €46. When one tonne of CO2 is as damaging as the next, it is hard to make sense of such variations.

Just as confusing is the international picture. The OECD (Organisation for Economic Cooperation and Development), which is very much in favour of taxing carbon, collects data on effective carbon tax rates in 44 rich countries that together are responsible for about 80 per cent of the world’s CO2 emissions. If countries are applying effective carbon tax rates at a chosen threshold or above, they score 100 per cent. The OECD uses three thresholds: €30 per tonne of CO2 emitted, €60 and €120.

"Climate change was first raised in the NZ Parliament 35 years ago. Our Government has had more than a generation to respond to this existential threat." - @ecomanda #ClimateEmergency https://t.co/X4ESDMPJfy via @marcdaalder

Let’s assume that there is a climate emergency and that we should judge countries by the most aggressive taxation policy designed to discourage fossil fuel consumption, namely a carbon price of €120 per tonne of CO2. In May of this year, the OECD published data for 2018. Across all sectors, the effective carbon price in the US was just 11 per cent of the threshold compared to four in Russia and five in China (Brazil was the lowest at one per cent). European rates are much higher: 48 per cent for Norway, 44 for Ireland, 43 for France and 38 for the UK. ‘Industry’ carries no cost for carbon emissions in the US and very low rates in Ireland and the UK (13 and 11). No wonder the OECD concluded: “The 44 OECD and G20 countries together have not even reached a fifth of the goal to price all emissions at least at EUR 60 per tonne CO2 in 2018”.

From Turkey to Tunisia, countries around the Mediterranean have been seeing some of their highest temperatures in decades #wildfires https://t.co/XWuRNTNq1p

Given the above complexities and the urgency underlined by the IPCC’s latest report, is the host country for COP26 leading the charge on the development of a global minimum carbon tax floor, or on the running down of the fossil fuel industry? Johnson’s response to the IPCC report was this: “we know what must be done to limit global warming – consign coal to history and shift to clean energy sources.” See what he did there? He left out oil and gas which suggests thumbs up to the Cambo oil field west of the Shetlands being developed by Shell and the private equity group Siccar Point, and waiting for approval from the Oil and Gas Authority.

Meanwhile, neither the Irish nor British governments have produced plans for achieving net zero emissions. The UK Treasury was supposed to publish a review of net zero costs in April but has gone back to the drawing board while Johnson and Sunak sort out their relationship. They need to mind what they do, or don’t do. As ‘renegade’ (her description) Oxford economist Kate Raworth tweeted, “ban all new coal, oil and gas projects – or in future stand trial for them”. Or in the words of Greenpeace, “see you in court”.