Community rallies round for a very special fundraiser 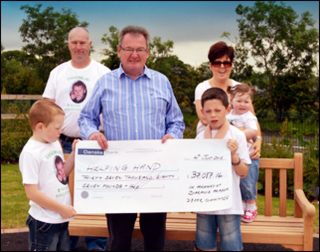 The Frazer family with the cheque

On March 26 last year life for the Frazer family dramatically and tragically changed forever as their twin boys Diarmuid and Cormac, aged six, were involved in a road traffic accident in Railway Street, Lisburn.

Both were rushed to the Royal Belfast Hospital for Sick Children (RBHSC). Diarmuid was admitted to the Paediatric Intensive Care Unit (PICU) and Cormac to a general ward. Cormac sustained cuts, bruises and trauma and thankfully went on to make a full recovery. Diarmuid received such loving tender care from the devoted nursing teams in PICU but sadly lost his little fight for life just two short days later as a result of serious head injuries.

The Frazer family and their entire family circle are totally devastated by Diarmuid's loss, a void that cannot ever be filled and life has or never will be the same. Despite their grief and tremendous sense of loss the family felt strongly about doing something to honour Diarmuid's memory so that his loss was not in vain. Leading on from this the Diarmuid Barry Frazer Fund Raiser (DBFFR) was formed and headed up by four committee members, his devoted mummy Martina and his aunts Bernadette Loughran, Karen Frazer Stockton and Joanne Jackson. Martina chose the RBHSCs charity Helping Hand as it was important to her to try and give a little back and to help other families in some way through Diarmuid. The DBFFR Committee organised the 'Never Forgotten' Gala Ball which took place on May 2 in the iconic Titanic Belfast and was hosted by BBC Sports Journalist Denise Watson with City Beat's Ibe Sesay and The Breakfast Club as guest artists. The aim was to raise as much money as possible through ticket sales, auction, casino and raffle. Some local businesses in Lisburn, Glenavy, Stoneyford, Moira and Belfast also took donation tins which added to the fundraising endeavours along with some teams that ran in the Belfast Marathon and donated their sponsorship to the Helping Hand Charity.

Our original aim in terms of ticket sales was approximately 200-250, maybe even 300 and we dared to hope to raise in the region of £10,000. Our ticket sales soared to 438 which was just incredible and to have such unconditional support on the evening was so overwhelming and for us 'unforgettable'.

As a result of this magnificent support we more than exceeded our expectations and raised a whopping £37,087.14 and still a few donations are coming in! Our hopes and dreams of creating an 'unforgettable' legacy for Diarmuid has been realised so we would really like to take this opportunity to say a special thank you to everyone involved, family, friends, neighbours, work colleagues – from those who helped with ticket sales and prize donations to those who catered for and entertained us on the evening and everyone behind the scenes in bringing the Never Forgotten Gala Ball to fruition. There are just far too many to mention but you know who you are and we hope you take this a token of our thanks. We would however like to extend a special and personal thanks to, Mr Sadlier and the Ballymacward School Community for their unconditional and sustained support to the family especially John James and Cormac, and also for their fundraising throughout the year, to Paul Buchanan and esteemed colleagues of the Lámh Dhearg, not only for their fundraising support but for supporting, mentoring and coaching John James and Cormac and providing an outlet for learning new skills and facing new challenges which has been character building for them both during a very difficult time. To the business community and local artists for donating a variety of fabulous prizes especially Thomas Taggart of Mercedes Benz, Belfast, Emma Beattie & Temple Spa, KerryAnne McCourt & IHB Moira, Slanes Cycles Andersonstown, Murray & Co Belfast, Oasis Travel, Railway Street, Lisburn, Horizon Hair Studio, McCalls and Hampton Interiors all from Lisburn Town, O'Neills Ltd, Fiona McCarthy Clarins, Lough Erne Golf & Spa Resort, Oliver McPartland and Briege Stanley both of Ballycastle. We would also like to thank the Auto/Electrical and Building Industries for their great support and finally to all of you who contributed in any way as our success is down to you and your wonderful generosity and commitment, not only to support a very worthy charity, but also the Frazer family. You have contributed in making this 'unforgettable' legacy for an 'unforgettable' special wee boy... our Angel Diarmuid, so from the bottom of our hearts we sincerely thank each and every one of you.

The presentation to Helping Hand took place on July 4 at Diarmuid's Bench in the School Community Garden. Nigel Kearney from Helping Hand was delighted to receive this phenomenal amount and mentioned that it was the biggest amount they ever received for a one-off event like ours. It is the family's wish to donate a specific item/piece of equipment to PICU in Diarmuid's memory but it could take up to six months for the funding project to be allocated. This donation is a fantastic and fitting legacy for Diarmuid and will go towards making a difference to the little patients and their families of the Children’s Hospital... just amazing!