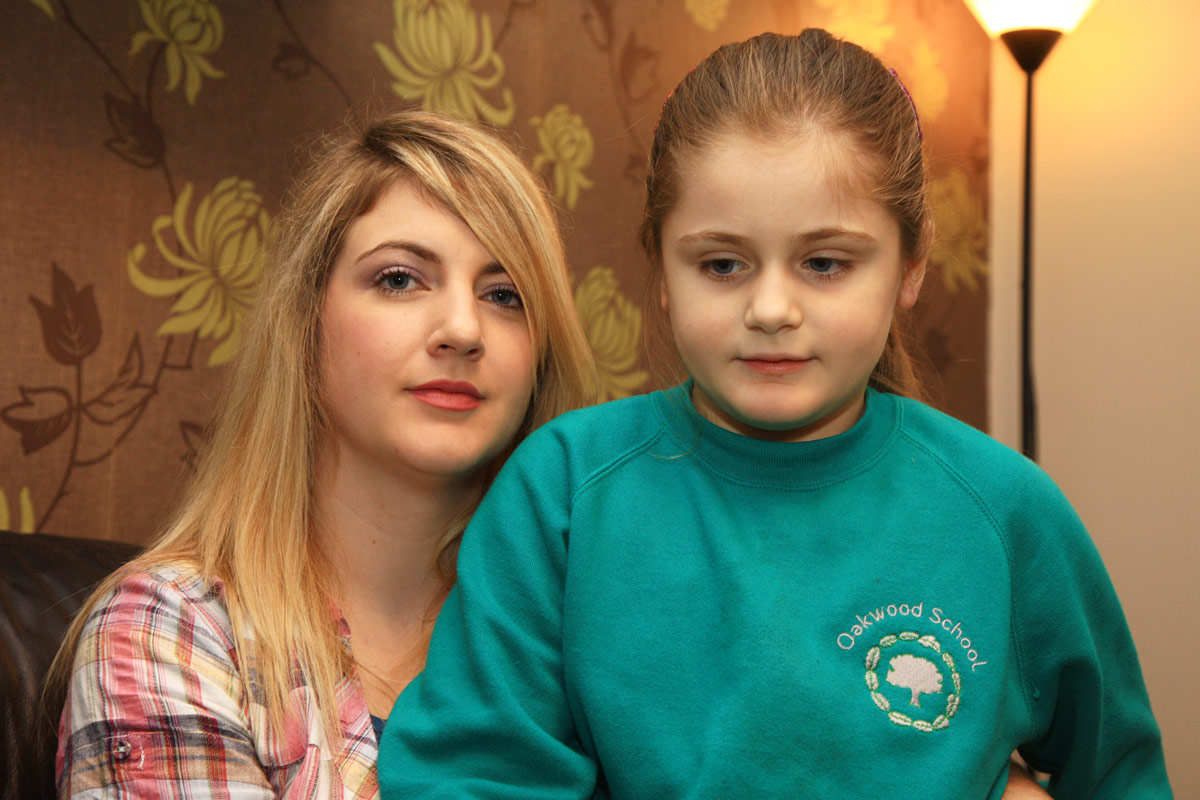 A big hearted school community has rallied round a brave schoolgirl in a bid to send her to the United States for the trip of a lifetime.

Scoil an Droichead on the lower Ormeau Road are pulling out all the stops for little Megan Traynor who suffers from a rare brain disorder.

A fundraising quiz to support the Lower Ormeau schoolgirl will be held at the Hatfield Bar next Friday (November 25) at 8pm. Money raised from the quiz will go towards sending Megan to Florida for a dream holiday to Disney World in Florida next month.

Nine-year-old Megan, who was born with the rare brain condition septo-optic dysplasia, attends Oakwood Primary while her sister, Hannah attends Scoil an Droichead. However her mum Leanne explained how said the fundraising was the Irish medium school’s idea.

“We were previously granted the trip from a wish-granting organisation to take her to Florida to go to Disney and go swimming with dolphins,” explained Leeanne.

“However the holiday was self-catering and as I was made redundant over the summer we had to postpone it due to financial pressures.

“Megan’s sister Hannah attends Scoil an Droichid and one day while picking her up I was upset and her teacher asked me what was wrong. I told her that we had been told if we pulled out of the wish again it would be cancelled due to the amount of kids on the waiting list.

“Off her own bat she went to the principal and they came back to us to say they would help with fundraising. We didn’t ask for anything but they have been really supportive in doing all of this.”

Megan’s condition means she has no eyesight and has multiple other issues such as diabetes, epilepsy and a growth hormone deficiency, meaning she endures a daily routine of numerous injections in order to keep her comfortable.

Leanne, who lives with Megan and her two other daughters Hannah (three) and Lily (one) in Lavinia Square, said the help of the school had shown “the human spirit” in the Lower Ormeau.

“We previously lived in Downpatrick and moved here because the school could provide help with the special needs. We have moved into quite a tight-knit community here which is always hard. However this has made it clear to us that this is such a welcoming place to be. My daughter is excelling here and it has opened our eyes to how fantastic the people are.”

In addition to the quiz, Scoil an Droichid pupils will also participate in a sponsored bag pack at Dunnes Stores in Annadale the following day as well as a sponsored non-uniform day and cake sale with all money going towards Megan’s December 8 trip to Florida.

“We are aiming to get £2,800 which is a big target but we figured if we could aim high and get somewhere in the middle it would cover things like food, travel and Disney stuff such as breakfast with Snow White and a princess party, which would all be fantastic.

“We haven’t got the money for all that by ourselves so hopefully this fundraising will help us make Megan’s wish as perfect as possible.”