Conlan focussed on the job at hand 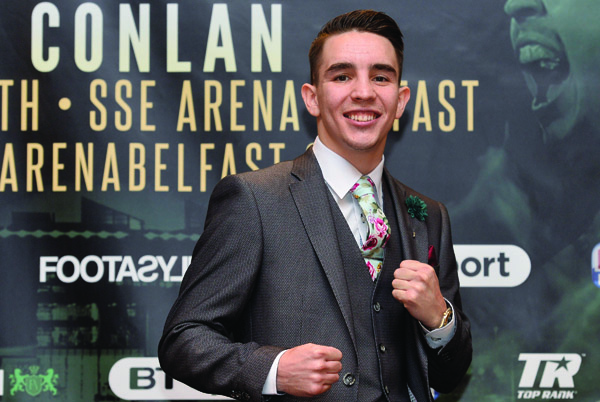 Michael Conlan says it will be a dream come true when he makes his home debut next month, but is not taking anything for granted at Madison Square Garden this weekend

WHILE the excitement is building towards his eagerly-anticipated ‘Homecoming’ show at the SSE on June 30, Michael Conlan’s gaze is firmly set on Madison Square Garden this Saturday night when he faces Barcelona’s, Ibon Larrinaga (10-1, 2KOs) over eight rounds on the undercard of Vasyl Lomachenko v Jorges Linares (live on Box Nation from 2am).

The West Belfast man returns to the iconic New York City venue for the fourth time in seven pro bouts, this time in the main arena for the first time, against the 27 year-old Catalan who will hope to make a greater dent in Conlan than David Berna who was blown away in two rounds on St Patrick’s Day.

While all the chatter will be about his home debut at the end of next month, likely against former world title challenger, Adeilson Dos Santos from Brazil, there is no taking this weekend’s challenge lightly as Conlan only knows too well, that one slip and his progress in the paid ranks will suffer a major set-back.

“I have to keep my concentration here because in boxing, anything can happen,” he stressed.

“It is a dangerous sport where people can get knocked out as soon as they lose that focus, so I have to remain focused on this one and stay fixed on the job at hand, which is Larrinaga next.

“I’ve watched him (Larrinaga), know what he brings. He can be dangerous, but I feel like I will have a lot more than what he can offer.”

Certainly, a fully tuned-in Conlan ought to be levels above this weekend’s opponent as he continues developing under coach, Adam Booth who he had in his corner for the first time back in March.

Under the Londoner, Conlan believes his technical skills will flourish, while he showed in his last outing that a more measured approach and ability to solve the puzzles during rounds can see him land his big shots, as Berna found to his cost.

“It’s been about moving forward,” he said of this camp, his second under Booth’s tutelage.

“Camp with Adam has been fantastic. I think he is one of the best coaches I have ever worked with.

“Everything is going well for me at the minute and I’m in a good place.”

In six pro fights to date, Conlan has heard the final bell just once, evidence of his undoubted power at featherweight.

While some have questioned the quality of opponent, none of his six victims have had losing records entering the ring and this Saturday, he steps it up again and all being well, will do the same next month where it is expected a first professional title (likely inter-continental or North American) will be up for grabs.

“Look at my record so far – I haven’t fought anyone with a losing one,” he protests.

“I do get some criticism at times, but that’s part and parcel. I feel that this next guy (Larrinaga) is the right step at the right time.

“I probably would have liked someone a bit tougher if I’m honest, even though he’s 10-1.

“At the same time, I will be stepping it up again in Belfast after, so I’m happy enough.”

It is a measure of how highly his American promoters, Top Rank rate the Belfast man that they are consistently showcasing him on the big stage and are willing to traverse the Atlantic to deliver his homecoming on June 30.

Cable giants, ESPN will be live from Belfast that night, again highlighting the esteem the 26 year-old is held in Stateside.

For Conlan, getting the opportunity to put on a big show for his home city and to repay the fans who have dug deep to follow him to the United States and even Australia is the priority and one, once the job is done on Saturday, he will relish as much as the fans.

“I have been saying from when I knew it was going to be announced, that it is a dream come true and it is,” he confirmed.

“I feel like me boxing here is going to be one of the pinnacles of my career.

“I have been in the Odyssey so many times and sampled the atmosphere.

“When I was in the ring (announced to the crowd during the Frampton-Donaire card) I got a nice reception, so coming here and putting on a big show is something that I’m really looking forward to.”