Conlan intends to sign off for the year in style 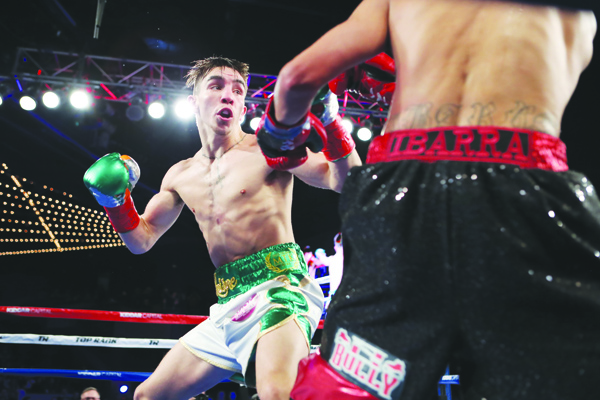 IT’S back to where it all began as a professional for Michael Conlan as the LA-based, West Belfast man returns to Madison Square Garden’s Theatre on Saturday night to take on Argentina’s Luis Fernando Molina over six rounds on the undercard of the Vasyl Lomachenko v Guillermo Rigondeaux blockbuster (live on BoxNation).

The recently-turned 26 year-old enjoyed a memorable debut in the New York City venue on St Patrick’s Day with a third round stoppage win over Tim Ibarra and has chalked up three further victories inside the distance since.

On Saturday, he will be looking to make that five from five in front of a sold-out arena and enormous worldwide television audience who will be tuning in to watch the main event that is one of the more exciting and intriguing match-ups in recent times and the first time in history that two, two-time Olympic gold medallists have clashed in the pro ranks.

Certainly, Conlan’s popularity has seen him either top the bill or land a spot on high profile undercards including the Manny Pacquiao v Jeff Horn bill in Australia back in July.

His performances have got better with each fight as he settles into the professional style and his latest victory over Kenny Guzman in Arizona back in September his most impressive to date.

“I think it’s all starting to fall into place,” said the vastly talented switch-hitter.

“I think I showed in my last fight I was much more settled and the big shot came when it came.
“I’m really looking forward to this one because I feel great. I’ve had a fantastic training camp, the best I’ve had yet so I’m looking forward to getting in there and putting in a great performance.”

Given his exploits on the amateur circuit where he became the first Irish male to win gold at the World Championships, it is a natural fit for Conlan to get the call to box on Saturday’s bill that pits arguably the two most technically gifted boxers on the planet together with Rigondeaux (Olympic gold in 2004 and 2008) moving up from super-bantamweight to challenge WBO super-featherweight champion Lomachenko (Olympic gold in 2008 and 2012).

He will be looking to make his mark on the night and in Molina, he faces a durable man who will certainly not be coming to simply survive given his own positive record.

The 29 year-old Argentinian will be boxing on the biggest stage of his career and by far his best opponent yet, so the expectation is for Conlan to win in impressive fashion and the Belfast man is confident it will be another early night.

“I think this guy is going to be a lot more durable,” he predicts.

“He has had 11 fights, won seven, lost three, drew one and has never been stopped. “He is going to be durable, but if I’m honest, I don’t see it going past four rounds.

“I think this guy is going to walk onto everything I have and I think I can take him out then.”

Should all go to plan on Saturday, it will set up an exciting 2018 for Conlan who has revealed his promoters, Top Rank want him to headline at Madison Square Garden once again on St Patrick’s Day with a Boston fight also pencilled in on top of his expected homecoming bout in June.

He is satisfied how his maiden year in the paid ranks has gone and is looking forward to signing off in style for the year in one of the world’s most iconic venues before enjoying Christmas back at home.

“It could have been better, could have been worse, but I’m happy with how it’s all went,” he said of 2017.
“Everything is moving along nicely and the highlight this year was obviously that debut with that atmosphere and being in New York, so hopefully I can light up the whole year again and finish it with a bang this weekend.

“I’m happy, but then I’m a perfectionist and would probably want more, but at the same time, I can’t complain about my first year as a pro. It’s taken time to adjust, but I feel comfortable and ready to rock.”