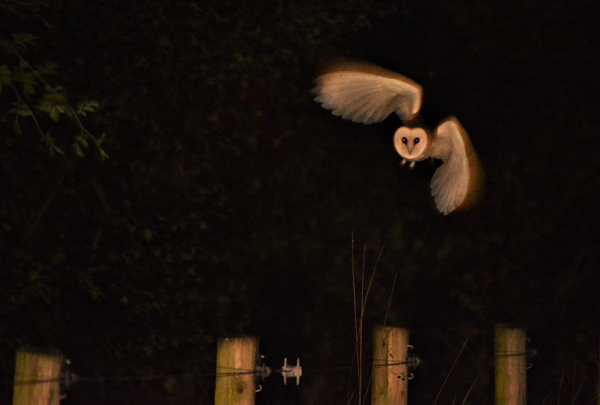 OUT OF THE DARKNESS: The elusive barn owl that was photographed by a Crumlin photographer

After months of searching for signs of barn owls on a farm estate in South Antrim, a Crumlin man who goes by the Twitter handle @antrimlens, and is both a volunteer field worker with Ulster Wildlife and a keen wildlife photographer, finally saw the iconic bird in all its glory and captured these amazing and rare pictures.

“Last Friday evening at around 9pm, Shane, the estate gamekeeper phoned me to inform me that he was parked 20 feet away from a barn owl which was hunting along the laneway,” he told the Andersonstown News. “I immediately grabbed my car keys and camera and met up with Shane to drive around the darkness in search of it.

“As we inched along the lane, with my faced pressed to the windscreen scanning, I was beginning to think this might be another false alarm, but then maybe 200 feet ahead was a shape in the darkness. My heart started to quicken and we were now 30 feet away and there it was, a beautiful barn owl.

“Over the moon doesn't come close. We were like two teenage lads who had, at the same time, just spotted the best-looking girl at the disco.

“After a few minutes, I saw the owl wasn't bothered by us being there, so we put on the car lights and I could see that it was a female. I then switched my camera and flash on and stepped out of the truck, she didn't even flinch, so I started to take photos, making sure not to disturb her and backing off if I felt any unease.”

Two nights later when he went back down, the owl was sitting on a fence “waiting for me”.

“I watched her hunt for mice and rats, which there was no shortage of, and strangely beetles, which is quite unusual behaviour for barn owls. She happily flew by me and landed on fence posts no more than 20 feet away.

“It’s a fantastic bird and a fantastic experience that I'll remember for a very long time.”

It is estimated that there are less than 30 to 50 breeding pairs of barn owls in the north, as rodenticide use, loss of traditional nest sites, and intensification of agriculture has taken its toll on the bird of prey.

Nina Schonberg, Volunteer Barn Owl Officer with Ulster Wildlife, said, “Volunteers are invaluable in helping us to monitor our small barn owl population in Northern Ireland, so that we can target our conservation work to help them thrive.

“These much-loved but seriously under-threat birds are very elusive and only hunt at night here, unlike the rest of the UK, which makes it very hard to track them down, let along get pictures of them, so we are delighted with @antrimlens’ perseverance and his patience finally paid off.”

She added: “We are also excited to hear that another barn owl has been witnessed on the same estate, so this could be a breeding pair and with any luck, a nest site is nearby.”