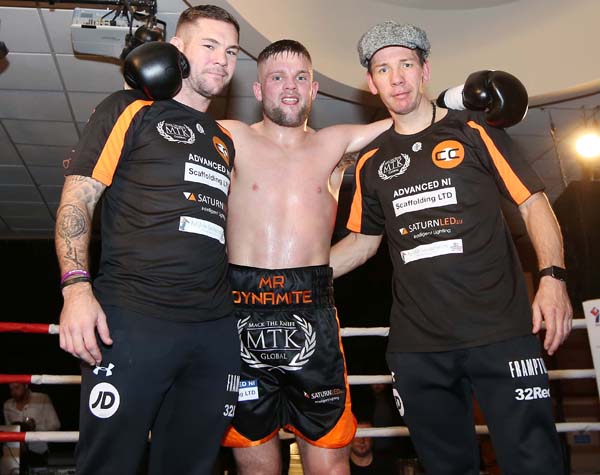 CONRAD Cummings may have spent the early part of his career boxing on the big shows, but getting rounds in the bank and putting into practice what he has learnt in the gym on the small hall shows hold just as much interest as he gets ready to take on Michael Mora at The Devenish on Saturday.

‘Mr Dynamite’ had a bittersweet 2017, winning the WBO European belt in March against Gogi Knezevic, but was then sidelined until December 1 following his split from Cyclone Promotions and the McGuigans.

He since teamed up with MTK Global and trainer, Jamie Moore and finally got back to doing what he does best when boxing his way to a points win over Norbert Szekeres at The Devenish.

While a big night lies ahead with an all-Irish showdown against Luke Keeler (who also boxes on Saturday night at The Devenish) on the Frampton v Donaire April 21 undercard, it is these keep-busy fights where Cummings believes he can make the improvements he needs.

“Touch wood, I get no injuries and can go out and do what I did the last time and practice the things I’m learning in the gym. I could go and blast these opponents out in a round, but I want to test what Jamie (Moore) has been teaching me. I intend to do that again and it will help put on a big performance on April 21.”

Mora was also in action at the Finaghy venue back in December, losing in the second round to Padraig McCrory, but as stated, Cummings is not interested in blowing opponents away in these fights. He wants to get the rounds he failed to bank last year, try new combinations and get fully back I the groove ahead of what could be a massive year.

Victory on Saturday should be a given, but it’s a win over Keeler which will help boost his ranking with the WBO further and could put him in the frame to challenge Billy Joe Saunders (should Saunders successfully defend his world title against Martin Murray) later in the year.

Cummings admits it was a difficult year for him last year as his career stalled somewhat, but the support of his fans helped him keep going and he wants to repay that faith this year with a glimpse of things to come against Mora on Saturday.

“I’ve had some people laughing at me about this, but these are the type of fights I begged the McGuigans to get for me before my other big fights because I knew I needed them, but I never got them,” he explained.

“I won my WBO European belt last March and my first defence will be in April, 13 months later which is self-explanatory about the year I’ve had.

“This year is going to be huge. I’m enjoying myself with a new team and I feel like I’m in control of my career now.

"I’m so glad to have this great support as it drives me on. There were a few months there where I was sitting doing nothing, but people were always asking me and Tweeting me and that does motivate you.

“It lets you know that people do care about my career and that means I will be looking for a big performance on April 21.”