Cunningham yet to make decision on county future 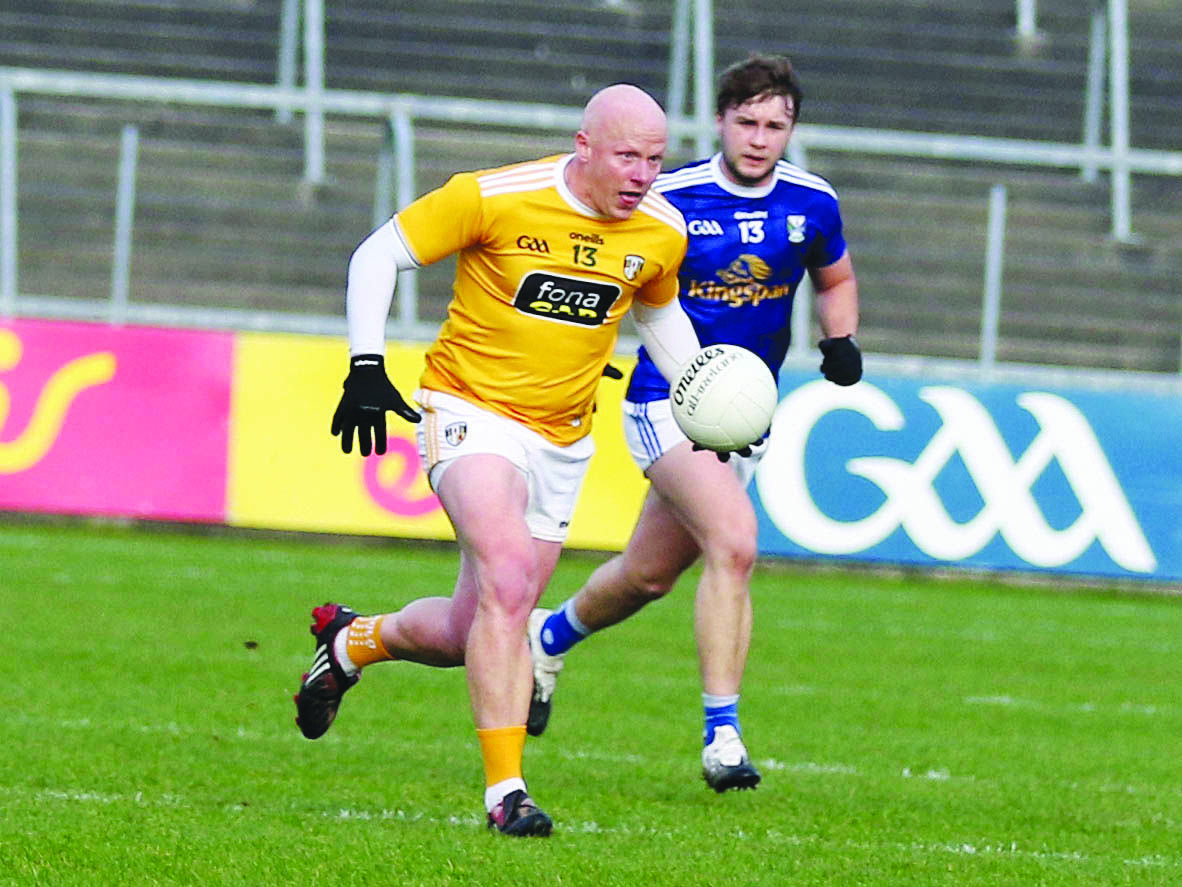 ANTRIM stalwart Paddy Cunningham insists he has yet to decide on his inter-county future, but feels he has plenty to offer to a new management team.

Lenny Harbinson stepped down after three years as Antrim senior football manager in the wake of the Ulster SFC defeat to Cavan earlier this month.

Tyrone’s three-time All-Ireland winner and 2008 All-Star Enda McGinley has emerged as the front-runner to succeed Harbinson and has held preliminary discussions with the Antrim executive.

At the beginning of the 2020 season, Cunningham was coaxed back into the inter-county fold along with Tomás and Michael McCann with the aim of helping the Saffrons secure promotion from Division Four.

Prior to lockdown, Antrim moved into a strong position following a brilliant 2-21 to 1-12 win over league-leaders Limerick in Portglenone.

However, disaster struck on their return to competitive action when a 7-11 to 0-7 defeat to Wicklow in Aughrim left Antrim needing other results to go in their favour on the final day.

A seven-point win over Waterford, who refused to travel North for the game, in Dundalk wasn’t enough as the Saffrons finished third in the division for the third successive season.

Antrim performed with plenty of heart in their Ulster Championship quarter-final defeat as they lost to Cavan by four points having led by a point at half-time.

The game might have had a different outcome had Paddy Gallagher found the net when one-on-one with Raymond Galligan in the early stages of the second half, but the Cavan goalkeeper was equal to Gallagher’s shot.

Harbinson stepped down in the aftermath of the loss in Kingspan Breffni Park, but Cunningham says he has yet to reach a decision on his own future with Antrim.

“I haven’t made a decision yet and it is probably a bit too soon to be saying whether I’ll be back or not,” said Cunningham.

“I’ll wait to see what happens over the next few weeks. Obviously, there’ll be a new management team coming in so they might have different ideas on how they want to play and things. I’ll see how things pan out over the coming weeks, but I won’t make any rash decisions.

“That was the worry coming back and I was apprehensive about whether I could play at that level again. Pre-lockdown, I felt I was going really well and then we didn’t know if things were going to get back up and running again this year.

“I did say it was going to be a one-year gig. It has been topsy-turvy for everybody. I feel like I probably do still have something to offer. I’ll speak to my wife and I’ve a young family and I’ve a lot of stuff going on work-wise. I feel like I’ve something to offer so if the right systems and set-ups were in place next year, I might be able to give it another go. I’ll wait and see.”

The decision to bring back some of the more experienced players proved a wise decision by Harbinson.

Cunningham’s 0-25 haul in Division Four put him eighth in the overall scoring charts for the Allianz Football Leagues.

Michael McCann and Kevin O’Boyle were also among Antrim’s best performers in the games against Waterford and Cavan.

Yet, small margins can often prove vital in the race for promotion and Cunningham believes that Harbinson can count himself unfortunate not to have guided Antrim to Division Three on at least one occasion during his tenure.

“To be honest, I wasn’t sure what way thing were going to pan out. You have to respect Lenny’s decision, he has left on his own terms,” said Cunningham.

“If Covid hadn’t have happen this year, he’d all the momentum after the Limerick win going into the Wicklow game, which would have been the following week.

“On a personal level, I’ve a lot of time for Lenny. He is a great Gael and a great Antrim man. I think he has left the set-up in a better place than it was three years ago. It is just unfortunate that we aren’t playing Division Three football next year. We just need another five or 10 per cent than what we are currently producing to get there. Hopefully, with a new incoming manager, we can get their next year.”

Cunningham was in attendance at the Athletic Grounds last Sunday as an analyst for BBC Radio Ulster.

Cavan were no more than workmanlike in their 0-13 to 0- win over the Saffrons at Kingspan Breffni Park and they were underdogs against a Down side who clinched promotion to Division Two last month.

Cunningham was vital cog in the last Antrim side to reach the provincial decider back in 2009 and he could only ponder the ‘what-ifs’ had the Saffrons taken their chances against Cavan a week earlier.

“In the second half, we had chances and we just weren’t clinical enough,” reflected the Lámh Dhearg clubman.

“That comes with experience too. They’ve experience of playing at a higher level as well and that shone through. The likes of Gearóid McKiernan and some of their other leaders really stepped up to the mark.

“I think it is a learning curve for us as well. A lot of our lads haven’t played a lot of Ulster Championship games.

“At the minute, there is a good mix of youth and experience there and I think there is a lot of learning to be done. Reflecting on the game now, it is disappointing because Cavan are now in an Ulster final.

“If thing had have gone our way last week and we were a bit smarter at stages – a lot of their scores in the first half came from us giving the ball away.

“We’ve a lot of things to work on, but credit to Cavan too as they’ve had a tough run to the Ulster final.

“That was a serious turnaround against Down so far play to them. I think Down probably lost it more than Cavan won it, but you have to get Cavan credit too – they’ve plenty of heart.”