Devine hoping to soar in Russia 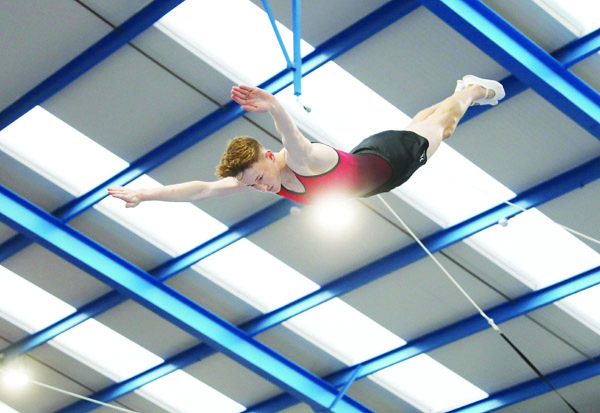 West Belfast gymnastics star Ryan Devine, pictured training at Flight Gymnastics in Mallusk, will compete at the World Championships in Russia next week.

BELFAST Gymnastics star, Ryan Devine departs for Russia this weekend to compete in the World Championships fresh from winning his maiden British title.

The De La Salle student will travel to London on Friday and fly out to St Petersburg on Saturday.

Devine came out on top of a high-class field in the senior men’s DMT competition in Birmingham at the end of September to win his first British title and secure his place in the World Championships.

His coach, Simon Flannery, was delighted with his performance in Birmingham and is hoping some adjustments to his routines will yield a further improvement in Russia next week.

“Each competitor completes two routines and the top eight go through to the final,” stated Flannery.

“Those routines would have placed him second in the prelims for last year.

“We know he is in around the area he needs to be to make it to the final.

“He was brilliant in Birmingham. He had a tough build-up to the Championships. The routines we wanted to do at the Championships weren’t quite there yet, so we had to make a decision not to compete with those. It paid off because he done a modified last routine and he done it really well and won.”

He added: “Since then, we have upgraded those routines and he is looking phenomenal. He had a training camp last week with the GB team and he smashed all his classes.

“In our sport, it comes down to tenths of points, so every step you take, or wobble, or bend of the arms can cost you.

“Every tenth you lose is tripled because the three judges scores are counted.

“The last training camp is about fine-tuning the little details to maximise your score.”
As British champion, Devine will have high hopes of continuing his rapid rise in the sport by securing a medal.

Flannery believes Devine has the ability to progress to next Friday’s finals and is hopeful of another fine showing from the West Belfast prospect.

“He is hoping to get into the finals, which is the main thing,” said Flannery.

“I think his routines will easily put him into the top five.

“We’d love to come away with a medal.

“He is excited and a little bit nervous, but he turns that into a real positive. He gets adrenaline from it.”

Flannery, who recently relocated Andersonstown Trampoline Club to Mallusk to merge with Flight Gymnastics, also revealed that Devine will be targeting Olympic qualification in the New Year.

The 17-year-old will have a well-earned break from competition after the World Championships in Russia before embarking on a two-year goal to qualify for Tokyo in 2020.

“We have got a break after Russia then, next year, the qualification starts for the Olympic Games (2020),” added the Flight Gymnastic coach.

“It starts in February and he has to compete in a run of events over the next two years. Only the top 16 men and the top 16 women make the Olympics.

“We are working very hard to get him into the top 16 so he can qualify for the Olympics.

“If you take out the Russians and the Chinese, then a lot of different counties can make up that top 16. It comes down to whoever is the most consistent during the qualification events.

“He has shown this year that he is very consistent in the top competitions so hopefully he can get a spot."