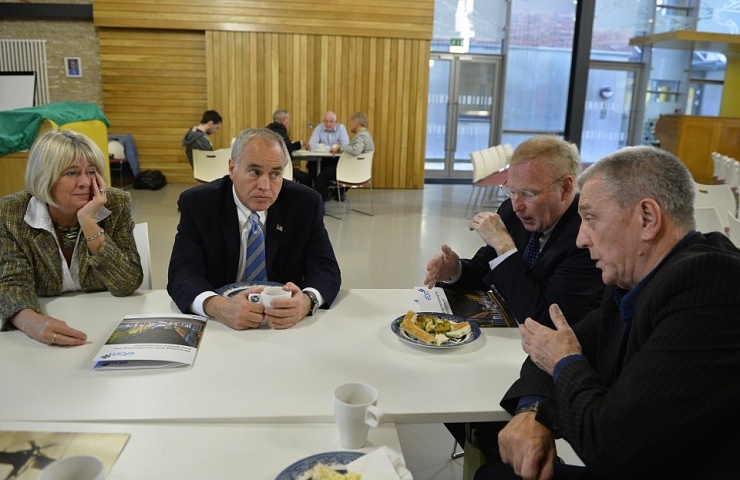 Comptroller Tom DiNapoli and his aide Pat Doherty discuss the impact of US investment on working class communities with UDA leader Jackie McDonald and the Rev Margaret Ferguson during a visit to the East Belfast community centre Skainos in October 2014.

Following up on both aspirational sentiment and firm promise, New York State Comptroller Thomas DiNapoli has today announced a new investment by his state’s pension fund in the North.

DiNapoli said that the New York State Common Retirement Fund is investing £5m ($7m) in the North through the Bank of Ireland Kernel Capital Growth Fund.

The fund, managed by Kernel Capital, was established in 2013 by Invest Northern Ireland and Bank of Ireland to assist small and medium sized enterprises (SMEs) to accelerate growth.

“Northern Ireland is on the move, as I saw firsthand during a recent visit.

“The peace process has opened doors and created economic opportunities for all communities. We’re proud to be able to play a part in Northern Ireland’s economic resurgence. This partnership will benefit our retirees, taxpayers and Northern Ireland for years to come.”

“In the last couple of years our economy has grown from strength to strength and this added investment, combined with Kernel Capital’s impressive track record of investing in high growth companies, will continue to support Northern Ireland’s thriving business community into the future.”

Deputy First Minister, Martin McGuinness said: “This investment by a major international pension fund is a vote of confidence in the north of Ireland, in particular our economy and demonstrates a strong commitment to help businesses here. Kernel Capital has a track record of investing with high growth export focused companies and this new investment will allow this fund to continue to help bridge the gap in funding available to our small business community and boost the confidence of those in the start-up and growth phases of business development.”

Enterprise Minister Jonathan Bell, who was a recent visitor to New York, said: “I welcome this investment which once again demonstrates a strong commitment to Northern Ireland’s economic future by Tom DiNapoli and the New York State Common Retirement Fund. The BOI Kernel Capital Growth Fund has already made an impact through its equity investments in Northern Ireland companies and this additional investment will give a boost to companies with high growth potential and will generate new opportunities for Northern Ireland’s entrepreneurial and business community.”

The investment move was additionally welcomed by MLA Máirtín Ó Muilleoir, former lord mayor of Belfast and convener of the annual New York/New Belfast conference in New York City, an event where Mr. DiNapoli has outlined his views on his state’s commitment to Northern Ireland.

“Comptroller DiNapoli has been a peerless ambassador for the work of building the hard won peace in the North of Ireland with jobs and investment,” said Ó Muilleoir.

“His latest investment in the cream of our entrepreneurial talent will not only underpin the new Belfast we are creating but serve as a beacon to attract other investment funds. We are indebted once again to the visionary and exemplary leadership of Comptroller DiNapoli and look forward confidently to the returns this investment will bring to the public workers of New York State and the peace builders of the north of Ireland.”

“Northern Ireland enjoys an innovative technology sector and a highly skilled workforce, and we look forward to Kernel Capital backing a diversified portfolio of Northern Ireland companies which we anticipate will generate attractive returns for the New York State Common Retirement Fund.”

The Fund previously invested in Crescent Capital, a Belfast-based venture capital fund manager that has supported and built creative companies throughout Northern Ireland.

Comptroller DiNapoli is trustee of the New York State Common Retirement Fund, the third largest public pension plan in the United States with more than one million members, retirees and beneficiaries from more than 3,000 state and local government employers.