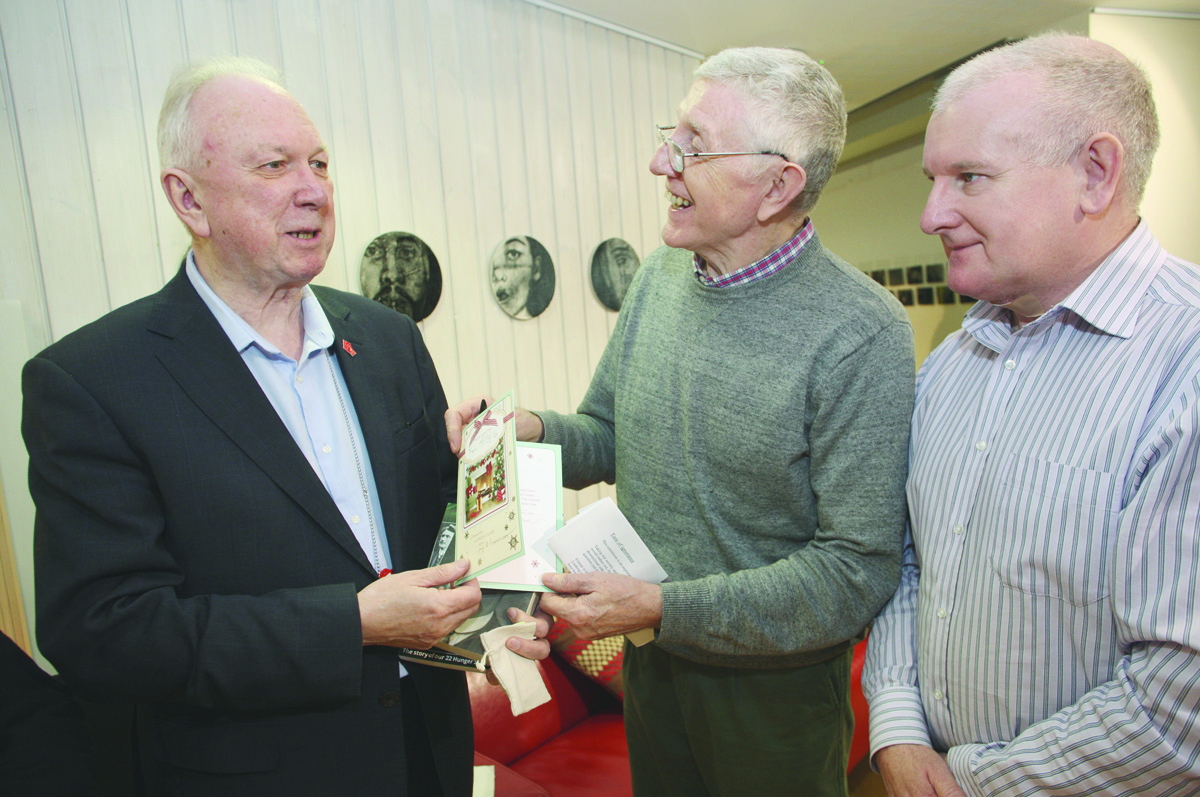 RETIRED Belfast dockers reunited recently to pay tribute to their former union rep after he announced his retirement.
Jimmy Kelly was a high-ranking member of Unite the Union from Waterford who towards the end of his career looked after the Belfast docks.
Speaking to the North Belfast News, Tommy said in many ways the battles the unions are fighting today are the same as those fought by James Larkin, James Connolly and Winifred Carney when they were on the docks as union organisers 100 years ago.
“They were essential fighting against zero hours contracts,” said Tommy. “Men would gather each day and some were picked for work and some weren’t. They stood against these practices and while everyone talks of the Dublin Lockout of 1913, in reality that started in Belfast in 1907 when James Larkin was here fighting for rights. It spread to Wexford in 1911 and then finally to Dublin in 1913.”
Jimmy says he has been delighted to be able to be part of the efforts to remember the history of the Belfast docks overseen by the Shared History Interpretive Project (SHIP).
“There’s a fantastic tradition here in Belfast and there’s no better people than SHIP to keep that going and I’ve been delighted to help with their efforts on behalf of Unite. As a union we are proud to have a huge membership across the island. The fight for workers’ rights has never been sectarian.”
Tommy said one memory in particular will stay with him from his time in Belfast.
“A highlight for me was when we unveiled the dockers’ mural in Sailortown. To see all the families who turned out to that was fantastic and really appreciated. It shows their families and their part in Belfast’s story will not be forgotten.”
SHIP chairman Liam McBrinn said they would be sorry to see Jimmy go.
“Jimmy has been a great supporter of what we have been doing here at SHIP and he has always fought hard to get us resources for our projects,” he said. “We all wish him well on his retirement.”
One of the last projects Jimmy was involved in was the production of a Winifred Carney memorial coin which is on sale now at the Dockers Club, McKenna’s Bar and the Art Shop on the Falls Road priced £5.
Also on sale is SHIP’s 2018 calendar which commemorates Winifred and is a useful guide to the history of the Sailortown area.
The coin has been developed in partnership with Intercomm, Siptu, Unite the Union and Unison.