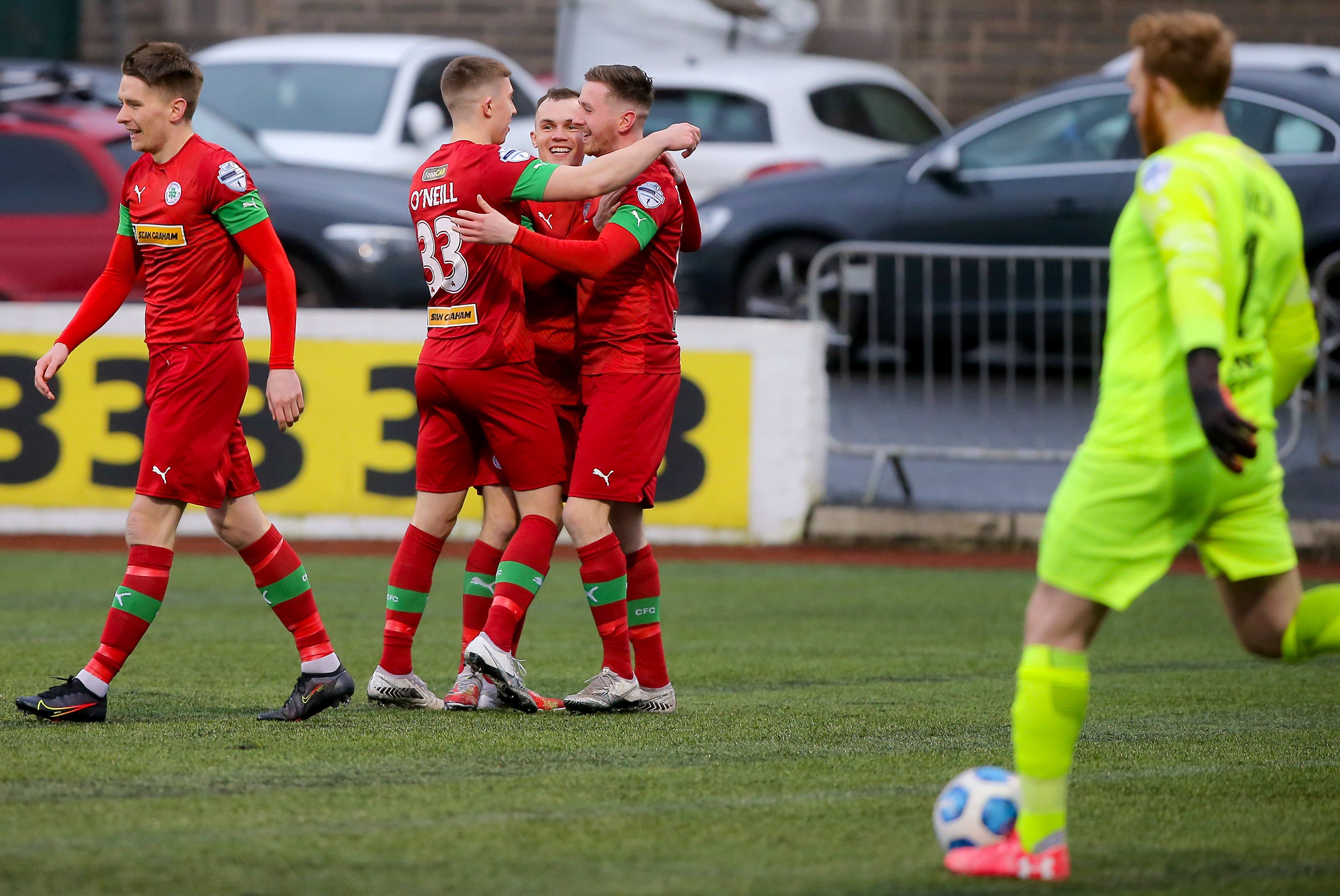 Ronan Doherty celebrates scoring the only goal of the game Presseye

An early goal from Ronan Doherty was enough to see Cliftonville get the better of Larne in a hard fought 1-0 win at Solitude on Saturday afternoon.

The midfielder struck early on after a mix-up in the Larne defence and despite the East Antrim outfit having the better of the chances in the aftermath, Paddy McLaughlin’s men prevailed to the delight of their manager who felt they saw the game out well.

“I thought we saw out the game really well,” reflected McLaughlin.

“Bar Jarvis’ strike, which was an excellent save by the keeper, I don’t remember us looking likely to concede. For five minutes against Glentoran and Portadown we looked a wee bit nervous and it cost us. I think we’ve learnt a hard lesson, and we saw the game out with that experience and I thought we saw it out comfortably enough.”

McLaughlin made one change from the previous weekend’s draw at Portadown as Garry Breen returned to the centre of defence after injury and suspension and as a result Barry Coffey dropped to the bench.

Larne felt they had an early shout for a penalty within the first 60 seconds as Kris Lowe’s foot was high in attempting to win the ball ahead of Jeff Hughes but referee Keith Kennedy disagreed and play continued.

It was Cliftonville who carved out the first half chance of proceedings as Paul O’Neill steered the ball into the path of Chris Curran whose low attempt was gathered by ex-teammate Conor Devlin.

The deadlock was broken after five minutes due to a mix-up the visiting defence. Chris Curran pressurised Graham Kelly on the edge of the box and attempted to pass into the area, Fuad Sule appeared to have dealt with the danger but was caught in possession and Ronan Doherty capitalised with a splendid finish to make it 1-0.

A chance to double the lead went a-begging two minutes later as Rory Hale feed Ryan Curran whose shot was turned behind by Devlin.

Larne’s first attack came midway through the first-half. Mark Randall burst forward but lost possession, the ball broke back to the midfielder whose low effort was parried to safety by Aaron McCarey.

Randall had another sighting moments later though Ryan O’Reilly threw himself in the way of the effort from distance.

The Inver Park men thought they were level on 32 minutes as Jeff Hughes headed home from a Randall free-kick, but the offside flag cut short the resulting celebrations.

A few minutes later, Ronan Hale sent a dangerous ball across the face of goal but Dylan Mottley-Henry was unable to flick it home and just before the break Hale tried an audacious lob that was just too high as Cliftonville took a slender lead at the midway point.

Mottley-Henry saw a low effort fall easily to McCarey and Hale failed to test the Reds’ shot-stopper from Randall’s flick-on as Tiarnan Lynch’s men tried to find an equaliser early in the second-half.

At the other end, Chris Curran drove forward but Graham Kelly tracked his run well and blocked the shot with Kris Lowe firing over the follow-up.

Cliftonville then had a penalty shout waved away before the hour mark. Rory Hale swung in a corner and Garry Breen appeared to have been impeded by Albert Watson but to the frustration of the home players Kennedy waved away the subsequent appeals.

Larne went all out for the equaliser with Garry Breen making an excellent intervention to deny Jeff Hughes in the area and Dean Jarvis seeing his goal-bound shot turned over by McCarey at full-stretch.

A minute later their last chance came and gone as substitute David McDaid teed up Jeff Hughes but his low drive whistled inches past the post.

Cliftonville thereafter saw off the remaining minutes to claim a well earned three-points ahead of a trip to Ballymena United on Tuesday evening.