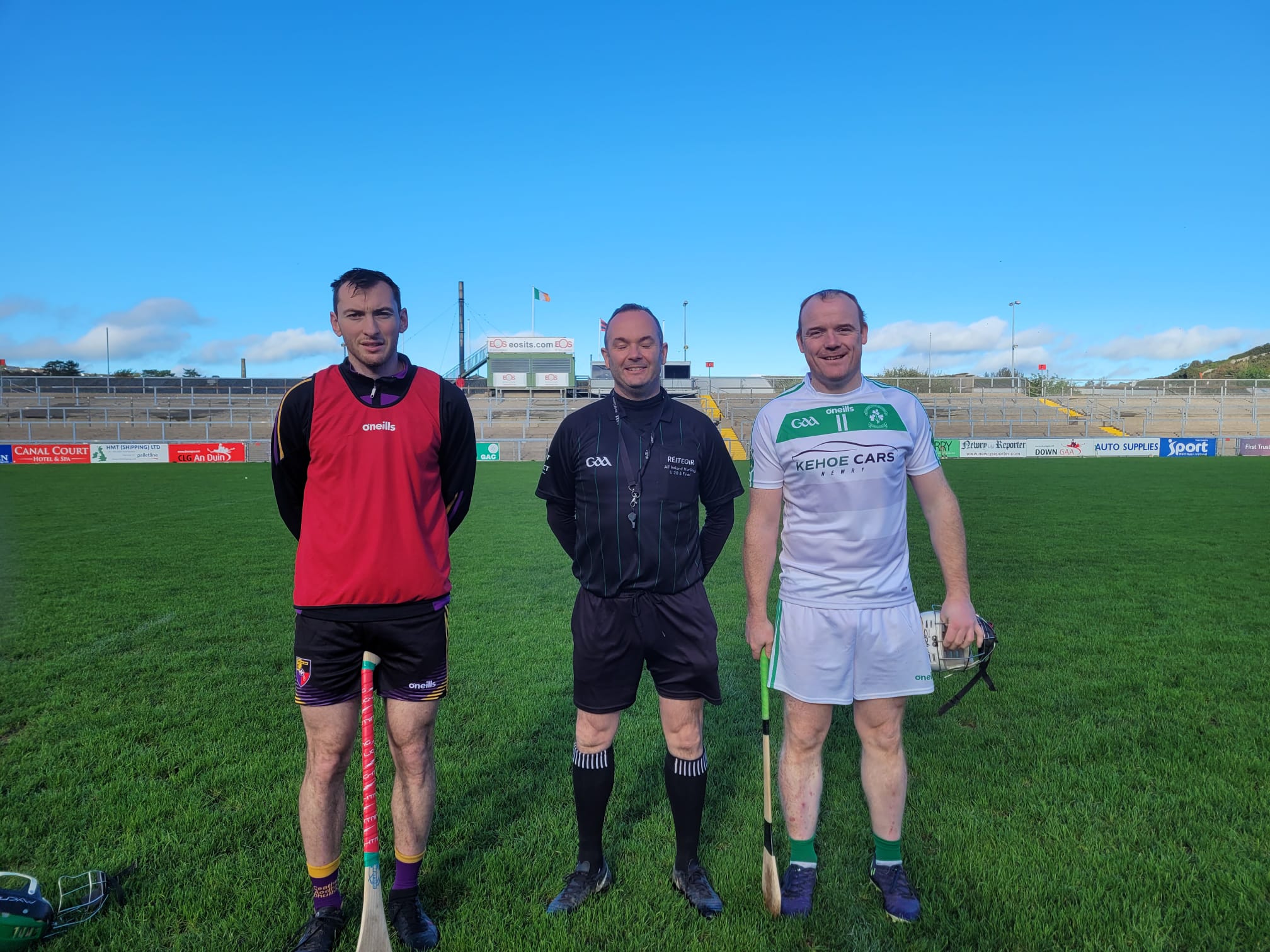 CARRYDUFF sealed their place in the Down Intermediate Hurling Championship decider thanks to a hard-fought four-point success over Newry Shamrocks at Páirc Esler on Saturday afternoon.

The result maintains Carryduff’s 100 per cent record with four wins from four and guarantees their place in the final.

Few would back against Newry Shamrocks joining them for a repeat of the delayed 2020 final which Carryduff won earlier this summer.

Newry will probably feel that they should have taken something from this game, but Carryduff’s ruthlessness in front of goal was the main difference between the sides.

Unfortunately, a game that was played in a very sporting manner throughout was marred somewhat by some unsavoury scenes after the full-time whistle and county board officials may decide to take further action when referee Kevin Brady submits his report.

The visitors opened the scoring from Conor McAllister inside the first minute before Artie McGuinness fired over a fine long-range effort for Newry.

Eoin McGuinness had the first goal chance on six minutes following an excellent pass from James Duggan, but Carryduff’s goalkeeper Conor McLornan made a smart save.

Carryduff could have plundered a goal at the other end, but Peter Loughran's pass to Gareth Lynch was overhit. The full-forward recovered to salvage a point from the move.

A well-struck ’65 from Donal Óg Rooney left a point between the teams at the first water break.

A stunning pass from James Laverty and a fine take and point from Lynch levelled proceedings on 17 minutes and the remarkable quality of scores continued when Sheenan fired over a brilliant point from long range.

Yet the hosts were chasing the game once more when Carryduff struck for their first goal.

A fine run from Loughran attracted a swarm of Newry defenders and he timed his pass to perfection and Lynch made no mistake to fire past Matthew Dippnall and move his side 1-4 to 0-5 ahead.

By the half-time whistle, Carryduff’s lead remained at two points, 1-6 to 0-7 with Sheehan hitting two frees for the Shamrocks with Eoin Rooney and Donal Óg Rooney scoring for Carryduff.

Newry Shamrock made a blistering start to the second half, turning a two-point deficit into a two-point advantage with four points in five minutes.

Aodhan Furlong, Eoin McGuinness, Ryan Courtney all fired over before McGuinness landed another.

It didn’t take much longer for their hard work to be undone as Carryduff landed their second goal of the contest against the run of play.

The Shamrocks had a couple of attempts to clear their lines from a long delivery and Ciaran O’Callaghan took full advantage to nudge his side 2-6 to 0-11 ahead on 38 minutes.

Once again, the Shamrocks responded well to the setback and were back on level terms when Sheehan converted another free before moving his side in front.The lead was restored to two when McGuinness fired over another.

Rooney replied in kind for Carryduff, but Newry were finding their scores easier to come by in the third quarter and McGuinness split the posts again on 45 minutes to move his side 0-15 to 2-7 ahead.

Yet Ronan Sheehan’s side only registered one more point in the final quarter of the game – a free from Paul Sheehan 10 minutes from time.

That score came either side of frees from McAllister, who took over free-taking duties from Rooney in the closing stages.

Newry’s free-taker would also lose his range as Sheehan put two scoreable frees wide of the posts late on, but Carryduff had already plundered their third goal by this stage.

An effort from Eoin Conway dropped well short of the posts and McAllister beat Dippnall in a foot race to flick the sliotar into the far corner of the net to edge Carryduff 3-10 to 0-16 ahead.

The missed chances from Sheehan came after some desperate defending from Carryduff and some late challenges, but the South Belfast men were then awarded a free in stoppage time following a foul on Lynch.

McAllister made no mistake to fire over the insurance point and Brady blew the full-time whistle to ensure a four-point win for Damien McCallin’s men.

With two rounds of the Championship remaining, Carryduff are assured of their place in the decider while Newry Shamrocks are on four points along with Liatroim who scored a 3-13 to 0-6 win over Clonduff on Saturday.