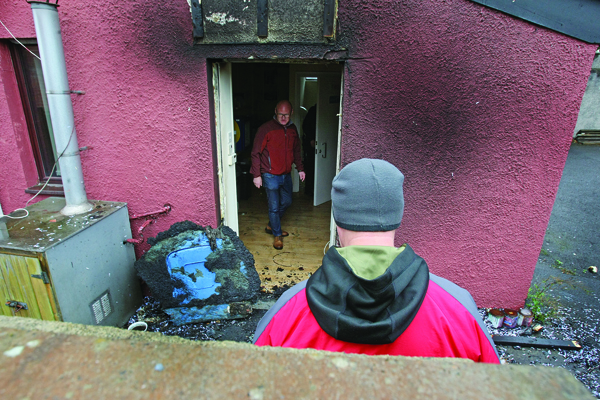 Connolly House after the early-morning attack

WEST Belfast MP Paul Maskey said that Sinn Féin “will not be deterred” from the work they are doing within the community following an early morning attack on their Connolly House offices.

Between 4.30am and 4.50am this morning (Monday) local residents noticed smoke and flames coming from Sinn Féin’s Andersonstown Road headquarters and rang the Fire Service.

Speaking to Daily Belfast from the scene, Mr Maskey said: “As of yet we still aren’t allowed into the building following the arson and paint bomb attack on the building which happened in the early hours of this morning. We want to thank the local residents who alerted the Fire Brigade after seeing the flames at the back of the building.

“I want to commend the Fire Brigade for coming out so promptly and making sure that whilst there is damage done that it was minimised. We haven’t been able to see the full extent of the damage, but their speedy action has helped curtail the damage inside the building.

“There is damage to the exterior but as of yet we are unsure on the level of smoke damage on the inside. that’s basically what we know up until this point.”

Mr Maskey added: “This is an attack on democracy, it’s an attack on the service that we provide in Connolly House. We provide a first class constituency service here, people rely on us, we won’t be letting this deter us from what we do in that office.”

The PSNI are appealing for witnesses after the arson attack.

Inspector McCullough said: "The fire was reported to us at around 4:50am. Police attended along with the Northern Ireland Fire & Rescue Service, who extinguished the blaze.
“Damage was caused to a door at the rear of the building, and to fascia boarding. There was no damage reported to the inside of the building. Paint was also thrown at a front window of the building.

"This is being treated as arson and I am appealing to anyone who was in the area around this time and noticed any suspicious activity, or anyone who has information which could assist our investigation to contact us on the non emergency number 101, quoting reference 162 of 20/08/18.”