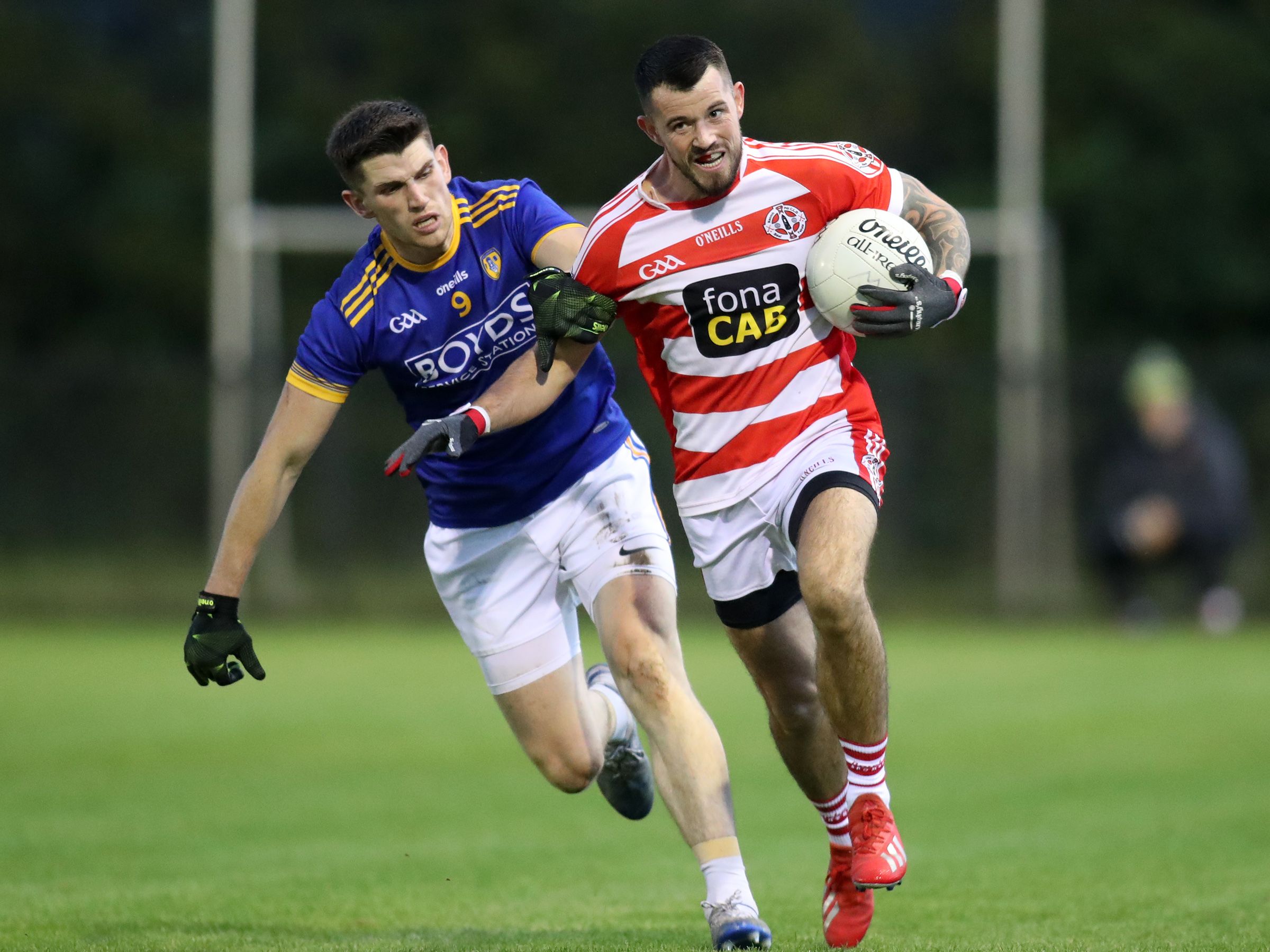 Niall Peoples tried to get away from Colum Duffin John McIlwaine

CHAMPIONSHIP defeats are never easy to take, but St Paul’s bowed out of the Antrim Intermediate Football Championship following a three-point defeat after extra-time against Moneyglass in Ballymena on Wednesday night.

There was sense of frustration and injustice in the St Paul’s camp after the game which was ultimately won thanks to a goal from Moneyglass midfielder Seanchann Duffin in the second period of extra-time.

The grievance, from a St Paul’s perspective, lies with the failure by referee Cathal McDermott to award what looked like a clear free to the West Belfast side in the final passage of play at the end of normal time.

The sides were level at 0-12 in stoppage time all after St Ergnat’s had forced their way back into the contest having trailed by five at the beginning of the second half.

However, Niall Peoples was cutting in from the left-hand side when he was abruptly brought to ground with a neck-high challenge. A free in would have left St Paul’s with a routine 30-metre free to win the game. Instead, McDermott gave a free in the opposite direction and his full-time whistle brought the game to extra-time.

Moneyglass were the better side in the additional 20 minutes, but St Paul’s were incensed that the game went that far.

Speaking after the game, manager Paddy Linden also pondered some of the frees given to Moneyglass in the second half.

“We are frustrated, but as a team, we’ve no control over that decision,” said Linden.

“We can only control what we are in charge of. Niall Peoples did what he was meant to – he got on the ball in a good position. I can’t answer why (the free wasn’t awarded) – that’s not for me to say.

“We went five points up, but then they were awarded five frees in a row.

“We might have been guilty of sitting off a little, but they (Moneyglass) didn’t score from play in the second half until the 57th minute.

“It wasn’t like we were winning our frees handy either – guys were being taken out of the game.

“They are a seasoned Intermediate team whereas we are coming up from Division Three with a very young side. We lost the semi-final by a goal last year (against Aldergrove). It was tough to take and we’ve lost the semi-final this year by a goal. It is hard to take, but there is no losing – only learning.”

St Paul’s were full value for their half-time lead of 0-8 to 0-4 having bossed the first half.

In fact, they probably should have been further ahead with Moneyglass goalkeeper Mark Carey getting an outstretched leg in the way of Liam McLarnon’s shot after four minutes.

The St Paul’s full-forward had given his side the lead after just 36 seconds but the Belfast side also missed a hat-trick of chances to add to their tally when they had Moneyglass hemmed into their own half in the first five minutes.

Yet, a direct style of play from their opponents proved fruitful with the full-forward line of Michael Connolly, Liam McLarnon and Liam McKenna showing well in attack.

After Aidan Kavanagh’s landed a point either side of Moneyglass scores from Colum Duffin (free) and McCormick, St Paul’s took control of proceedings.

Two frees from Connolly and an excellent point from play from the boot of half-forward Daniel Lavery moved them 0-5 to 0-2 ahead.

Duffin and Connolly then traded frees before Dermot McErlain landed his first point for St Ergnat's, but St Paul’s responded with McLarnon claiming a point following a well-taken mark.

A converted 45 from Connolly moved St Paul’s 0-8 to 0-4 ahead with 26 minutes played and Moneyglass were guilty of some poor finishing before the half-time break.

It took St Paul’s just 18 seconds to add of their tally on the restart when McKenna landed an excellent point from 45 yards out.

However, it took St Paul’s another 25 minutes to landed their 10th point as Moneyglass gradually eked their way back into the contest.

Kiefer Toolan pulled off a smart save to deny Moneyglass full-forward Kevin Marron before Conor Boyd opened his side’s second half account from a free.

McErlain missed a couple of good chances before Colum Duffin coverted another free to reduce the gap to three.

The Antrim panellist added another free on the 50-minute mark, but the free awarded to Jack McCoy three minutes later appeared to be very soft. Nevertheless, Boyd left just the minimum between the sides as all the momentum was now firmly with St Ergnat’s.

With four minutes of normal time remaining, St Paul’s had a glorious opportunity to seal the game when McKenna burst through on goal. However, the corner-forward blasted his shot wildly over the crossbar and had to settle for a point.

He added another from play moments later following a great move across the width of the pitch to put St Paul’s 0-11 to 0-8 ahead with three minutes remaining.

A score from the lively McCoy trimmed the gap back to two before another Duffin free left a point between the sides going into injury-time.

There was plenty of time for further drama as McErlain levelled proceedings only for Connolly to restore his side’s lead with a free after Moneyglass didn’t retreat quickly enough after a mark.

Yet, Jimmy McMeel held his nerve to kick the equalising point with just 30 seconds of added-time remaining.

There was still time for one last passage of play and, having won the kick-out, St Paul’s worked the ball to Peoples on the left wing. In trying to cut inside his marker, Peoples was brought to ground by a high tackle, but McDermott didn’t award the free and the game moved to extra-time.

Both sides wasted chances in the first period of extra-time and nether managed to raise a white flag in the opening 10 minutes.

The winning score arrived in the early stage of the second period when Seanchann Duffin, reintroduced at the end of the first half of extra-time, drilled a rasping shot into the far corner of Toolan’s net after a fine pass from McMeel.

The game looked up when McErlain, who missed three chances in the first period of extra-time, found his range again to put Moneyglass four ahead.

St Paul’s then lost centre-back Don Burns to a black card and back-to-back frees from Connolly weren’t enough as Liam Brady replied with two from play for Moneyglass.

The industrious Connolly scored his first from play, his eighth in total, deep into injury-time, but St Paul’s couldn’t find a late equalising goal to bring the game to penalties.

Moneyglass will be hoping to go one better in this year’s final when they take on Dunloy in the final on Saturday, September 19.