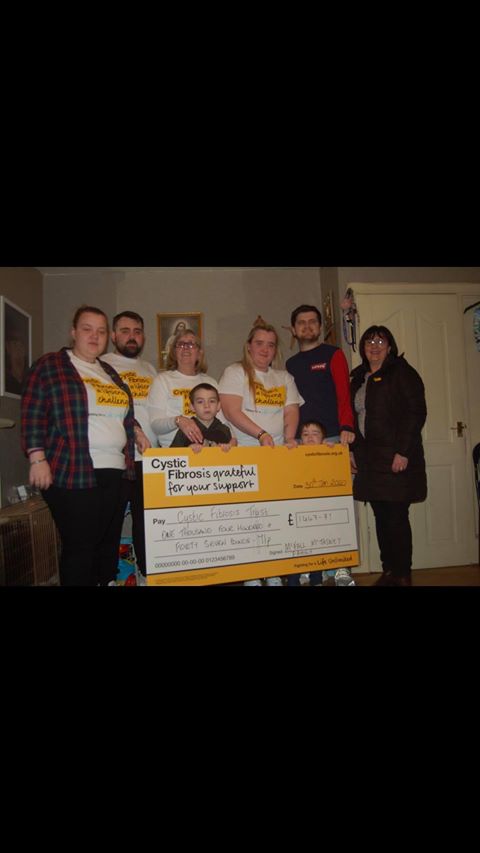 The family of Danielle McFall raised over £1,500 for the Cystic Fibrosis Trust

THE family of a Glengormley woman who died just weeks before she was due to begin a new life-extending cystic fibrosis drug have raised over £1,500 in her memory.
Danielle McFall (30) died at Antrim Area Hospital in October after a week in intensive care.
She was diagnosed with the disease aged just six weeks and after being diagnosed with epilepsy at the age of 12 she developed cirrhosis of the liver.
Danielle was due to start the new drug, Orkambi, which can improve lung function, after a deal was struck with US drug manufacturer Vertex.
However, Danielle became ill on October 17, soon after the announcement was made, and died on October 25.
In her memory, her family decided they wanted to do something and recently held a fundraiser for the Cystic Fibrosis Trust in Cliftonville Golf Club.
Speaking to the North Belfast News, Danielle’s mother Angela explained: “She fought long and hard all her life and we all really miss her.
“We wanted to do something in her memory but had never done anything like this before.
“It was a daunting task to organise something from nothing but we sat down and got sponsors who donated vouchers and prizes for a ballot.
“As we got closer to the event, we worried more and more about whether it would be a success.
“It was a freezing night in January and we were worried that people wouldn’t come out but thanks to a combination of hard work and incredible generosity, we raised far more money than we ever expected to.
“We put on a buffet, had great music from DJ Gerry and a ballot draw.
“We had vouchers for make-up salons and barbers, loads of drinks hampers, tickets to the Belfast Giants and the Game of Thrones Giant’s Causeway tour and the main prize, which was a gigantic perfume and make-up hamper from Medicare in Northcott.”
Danielle’s family managed to raise an amazing £1447.51 for the Cystic Fibrosis Trust and Belfast International Airport have pledged an additional £200 to the total raised.
“It was a really fun-filled night and as a family, we would like to thank all who helped make it possible.
“We’re overwhelmed by the result and are glad that out efforts paid off as fantastically as they did. It was a perfect tribute to our Danielle,” she added.