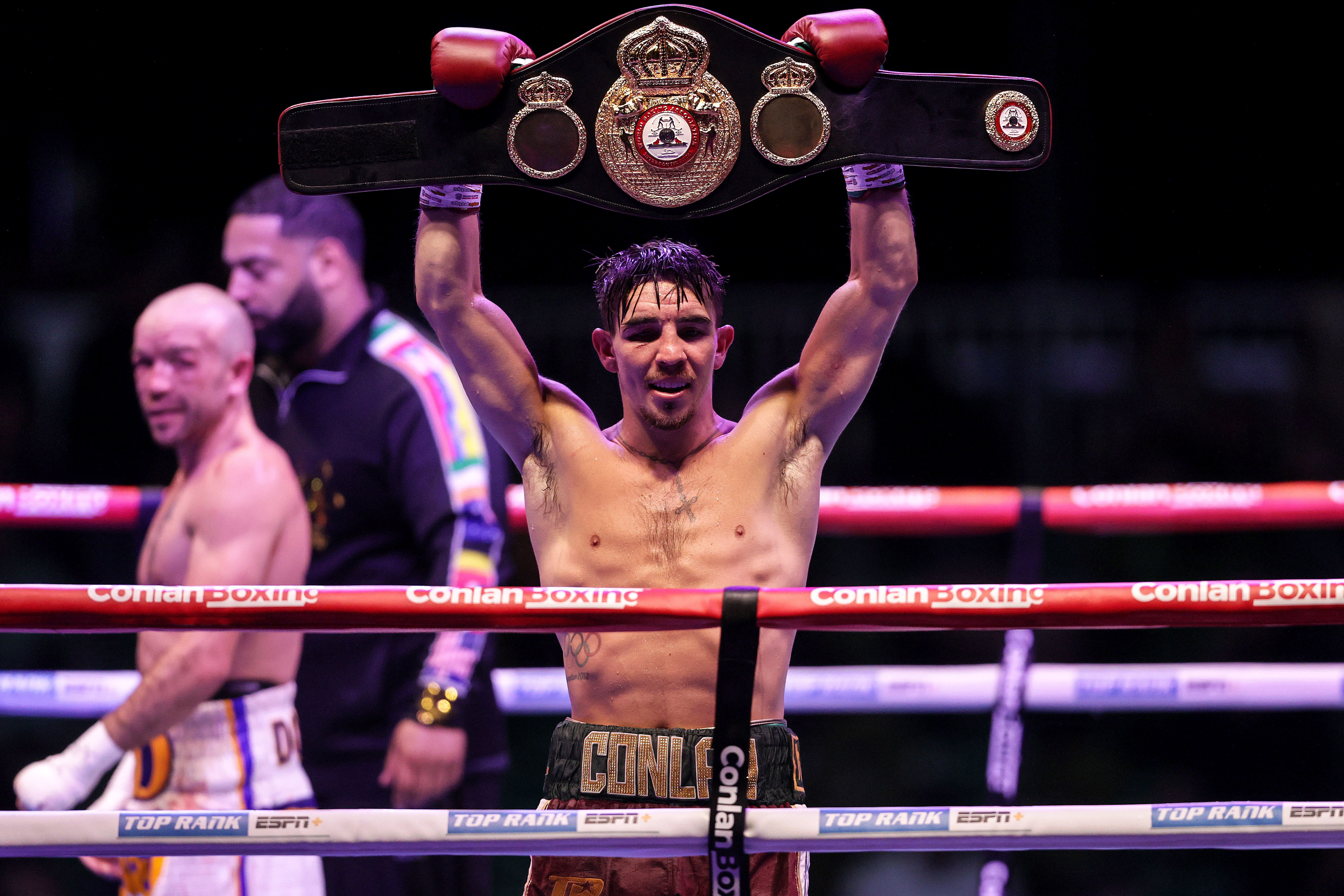 THE world is Michael Conlan's oyster as he sent his fans home singing in the rain after a career-best victory over former world champion TJ Doheny at a raucous Falls Park last night.

There were questions to be answered ahead of this all-Irish battle and the Falls Road man answered them fully as he showed a bit of everything on his way to a unanimous decision victory (119-108, 116-111, 116-111, of which this scribe agreed with the latter two cards) to claim the interim WBA featherweight title.

It had been two years since Conlan last boxed at the park in what was a carnival atmosphere and after 18 months without a show in town, the Irish fight public pulled on a poncho and made it a glorious return with the action in the ring giving them plenty to shout about.

After a stellar undercard in which Padraig McCrory broke the heart of Sergei Gorokhov to claim a seismic win and Tyrone McKenna had it out with Jose Felix to prevail, the main event had a bit to live up to and it did.

Doheny walked to the ring to the strains of 'Run This Town Tonight' and that was his objective, whilst the Conlan medley of 'Grace' and 'On The One Road' concluded with Edwin Starr's 'War' - the final piece of that trilogy no idle threat as the 12 rounds advanced, silencing some critics along the way.

The electricity of a @mickconlan11 walk-out in Belfast ... nothing like it.#ConlanDoheny Main Event is LIVE NOW on ESPN+ pic.twitter.com/UoYwQ0VY01

Conlan boxed, fought, produced defensive skills where he couldn't be hit by a bag of rice at times, then other times was gubbed to answer the question if his chin was up to world level. Doheny was not here for a holiday either, bouncing back from a fifth round knockdown and on the brink a round later to show the heart that brought him to the top of the tree as he roared back and kept this fight competitive to the last.

It was exactly the challenge and victory Conlan needed and while in some parts an interim title in the world of boxing's alphabet soup is lauded as the real deal, Conlan has taken this victory as just a big step forward towards a bona fide title shot.

"I think I answered enough (against) a former world champion in TJ - a tough dude," said the victor back in the Falls Park bowling pavilion as he supped on a can of Coca Cola - a modest pleasure for an athlete who can't afford such sugary delights in training.

"He came to win and I knew that when this cat is hurt (after defeat against Ionut Baluta) he would claw back and he showed that. I learned an awful lot tonight.

"TJ is a puncher. It showed tonight I can take a shot no problem. At no stage was I buzzed or hurt at all."

It had been a tetchy build-up to battle with the dispute over the weight and rounds dominating, but after a cagey opening quarter, this contest exploded into life.

Doheny - a natural southpaw - posed a few early problems, but Conlan swiftly met him at lefty and this helped him find the range off the jab to settle.

The first quarter of the fight was rather cagey with both men enjoying brief glimpses, but nothing to put their stamp on proceedings. Conlan seemed to be doing just enough to nab the rounds but this fight would soon explode in the fourth with the Falls Road man landing a trio of check lefts early to establish himself, while peppering the Portlaoise man with a jab that began to prompt swelling over his left eye.

Doheny's objective was to pin Conlan on the ropes and that he did on occasion, drawing the Belfast man into a fight and the crowd on their feet, yet the defensive nous of the home favourite was sublime on occasion: the head and foot movement rendering him an elusive target. That's not to say Doheny was swinging at fresh air all night as Conlan was forced to take some heavy shots and as such, whilst not ideal, did tick a box as to whether he has the punch resistance to survive at this level.

In the build-up, Doheny dismissed Conlan's power, suggesting he can't crack an egg, but the Belfast man proved "there's some yolk in there" with his body work and volume sending Doheny to the canvas in five.

Conlan followed as the action resumed with heavy fire as the Laois man backed up and covered, seeing out the round and there was no let-up in the sixth bar a warning for a low blow that afforded Doheny some vital seconds.

In sport, it's said some need a pat on the back or a kick in the arse, and Doheny's trainer, Hector Bermudez, almost lifted his man off his stool for the seventh and sent him into battle, demanding more.

Doheny responded with fire in his belly and won the round, displaying all the courage that brought him to the pinnacle of the sport as he dug in and traded inside with both men exchanging fire.

They swapped rounds eight and nine, but Conlan was just that bit better as he clubbed his rival with better shots and an eye-catching uppercut as we entered the championship rounds.

The pace was unrelenting now as both knew they had to work hard, yet Conlan's noted body work was a fine deterrent despite Doheny throwing the kitchen sink at him in 11. Yes, he probably took the round, but a knockout was needed in the 12th and instead of getting on his bike, Conlan fought fire with fire, confident his engine, chin and ability in what turned into a dog fight.

There was never any real doubt this fight would go the distance given the stature of both men and so it proved as the week's disputes turned into respectful embraces at the final bell - fitting for two warriors and Irish boxing heroes.

It wasn't a case of who, but by how much, the result would be decided and Conlan now marches on with options at both super-bantamweight and featherweight.

"Sometimes I enjoy enjoy making them miss too much without making them pay and that's something I need to work on," said Conlan who is now perfect through 16 fights.

"There were times I was on the ropes and TJ was firing five, six, seven and I was 'sup, sup, sup' (making him miss). I was far too comfortable at times and I need to punch back at those times. That's one thing I learned in there but another is that I'm very hard to hit.

"I'm still looking to fight the winner of Stephen Fulton and Brandon Figueroa (super-bantamweight unification on September 11). The 126 (opportunity) just came up but I can fluctuate between both.

"I'm a giant at both weights. I'm big at 126 but I'm even bigger at 122 so the opportunities are there in both decisions and I'm happy to take them."