Fiona: 'How did my baby end up in a storm drain?' 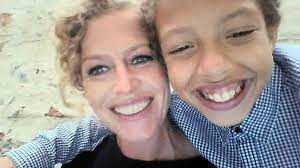 NOAH Donohoe’s mother has revealed how she will never understand how the police carried out an inadequate investigation into what really happened to her son. Fiona Donohoe speaks with deep pain about how she is left stranded with many thoughts about how Noah died.

Fiona pays tribute to her loving son and breaks down into tears; her eyes look heavy and tired. “We were very close, my son Noah and I, my only child. He would finish my sentences and I used to finish his, so that is how close we were.”

Noah was found dead in a storm drain at a cul-de-sac in North Belfast in June 2020. A police inspector told Noah’s mum that him being seen naked in the middle of a street was something they thought was a Father’s Day prank.

‘The police have been very disrespectful and it makes me so angry,” Fiona continued. “The police have a tag-line duty: to care. I have seen this care from some lower-ranking officers. The higher-up police officers have shown me disrespect about my Noah. My child was 14 years old and the police were forgetting this in their investigations. Across the road from my house here, an adult was killed and police followed all the investigation protocols, they put their resources everywhere. They did not do that with my son, a 14-year-old child. An internal police report has vindicated my complaint by stating that not enough resources were used in the investigations of the death of my son. This has made me think how they were not serious in conducting their investigations. This has been a horrible experience for me.”

Fiona is concerned that the police ruled out foul play early on and that they were concerned about keeping a lid on any social unrest that may have been brought about by Noah’s killing.

“In the initial stages of investigations, the authorities were urging that we maintain a certain approach, they were censoring us because it would cause social disorder,” she said.

“I met with the highest ranking officer, the Chief Constable of the police. I told him that it came to my attention that there was a witness who saw Noah naked on the street. It is also alleged is that there were two men on the street standing not far from Noah when he was seen. I don’t know what police are doing with this kind of information. They should have taken this information very seriously. Who were these men? There is no clarity in how the police have used their resources. The first 72 hours were important in their investigations because to them it was amber and not a red alert. While my baby was still not found, it is reported that two departments of the police were divided about which team should take the investigation forward.”

Fiona is tortured by the questions that remain to be answered – particularly about the search for Noah and its eventual conclusion in a corner of the city that her son knew nothing about.

“I wake up in the middle of the night thinking, I can’t go through that storm at night, how can my baby go through that storm drain? I need to find out what happened. All I want is answers. There are different tunnel systems in these storm drains. How did the police know exactly where to find my son? I also got really angry when I found out that on their first investigation days when they were searching for my baby, it was raining and because of health and safety reasons, they were to leave the site. It’s horrendous.We as taxpayers pay for these people and they just called off the search because of rain and it was not heavy rain. My son is treated like this by the police.”

Fiona has led a campaign, including a petition, for the release of unredacted Noah files by the police. Family, friends and a majority of the public want to know why the police have applied for a Public Interest Immunity certificate which, if given, means they can hide four crucial files in the investigation. Over 302,000 people have so far signed the petition for the release of all the files.  “The petition is like shining a light of shame in the corner,” says Fiona, “it takes the public to shame the police for what they are not doing”

Fiona is asking for a change in the law in relation to a witness or witnesses to a crime.
In Germany it is mandatory for a witness to report an incident in which an offence was being committed or something unusual happening in the vicinity of anyone vulnerable or not. If there was such a binding law here instead of just a basic volunteering of information, Noah’s mum believes details about her son’s last moments would have been known. She believes there should be a law imposing a duty of care towards the victim by any member of the public who witnesses an incident.

“The biggest thing is what’s not being said,” says Fiona. “There is censorship. It is such a shame that people would want me to feel protected now but nobody was there to protect Noah. There is no text book definition on how I feel or deal with my trauma. It has been a very difficult learning journey. I have to protect Noah’s justice.

“This pain is never going to leave me. It is overwhelming. It makes me say to myself that Noah is in a safe place. I have to remind myself that he is safe. It is like being in a straitjacket and you know you are definitely going to escape the straitjacket. I have to live with it. Just imagine being there and not going to get a hug again from my son.”

Niamh Donohoe is Fiona’s younger sister and she continues to support her through all the difficulties.

“It is very difficult to trust people after trauma and this is where my sister comes in, I trust her,” she said. “I have walked away from therapies because at the moment I cannot go for the ones that they offer.”

According to Niamh, there has been cross-party support for the demand that the police, the justice system and the coroner be more forthcoming. She particularly mentions the Ulster  Unionist Party leader Doug Beattie and Sinn Féin for having been supportive about thorough new investigations.”

To be continued next week.

Elly Omondi Odhiambo  is a writer based in Belfast.
ellyomondi@gmail.com