Following the leader with the media 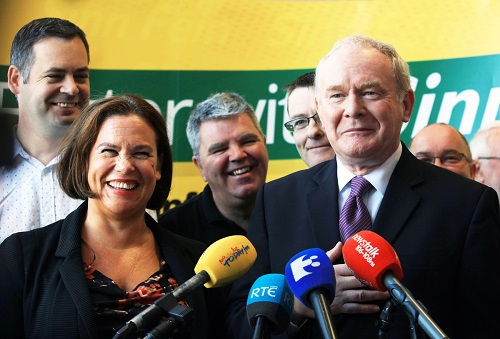 IF there’s one thing unionist politicians enjoy doing, it’s telling republicans who should represent them (republicans, that is). We got a lot of this during the years when the Orange Order thought that it had an unfettered right to march where it chose: if there was to be any discussion with residents about this right, it must not include spokesmen such as Breandán Mac Cionnaith.

Unionists north and south of the border (Yes, Virginia, there are one or two down Dublin 4 way) have for several years now been following a similar tack with regard to the leadership of Sinn Féin. Sometimes, particularly in the case of D4 unionists, they cloak their leadership criticism in honey. That is, they urge Sinn Féin to change its President, but say it would be a wise move because then ‘new skins’ like Mary Lou McDonald or Pearse Doherty could take the Sinn Féin helm, and lots of people who wouldn’t have voted Sinn Féin because of perceived baggage carried by Adams, would flock to vote for the party.
Being of a modest nature, I’d be slow to disagree with a Dublin 4 thinker, but I must in this matter. It is true that there are people who cannot abide Gerry Adams, but if Gerry Adams were replaced by, say, Mary Lou, would that mean there’d be a Corbyn-style tsunami of new members flooding in to Sinn Féin? I doubt it. For every voter dissuaded from voting Sinn Féin by the person of Gerry Adams, there are others who vote for Sinn Féin for that very reason. They believe that Adams bore the heat of the sun, so to say, during the Troubles, and has shown masterly skills in growing the party into the biggest in Ireland. Does Mary Lou or Pearse have the same political presence as the current leader? Probably not.

But while Gerry Adams and the Sinn Féin party are right to reject calls for his replacement from people with no love and probably some detestation of Sinn Féin, they also are aware that the bell will eventually toll for Gerry Adams. What to do then?

Any replacement leader of Sinn Féin needs to project two major commitments: to equality and to a new, reunited Ireland. There is little doubt that Mary Lou and even more so Pearse have a firm grip on the economics of our present state of partition, and how things might change for the better with a reunited country. But while you might hand the younger people the compliment of knowing their sums, you might be slower to hand them the compliment of being as committed to national reunification.

In short, Gerry Adams is obviously committed to Irish unity, while his grasp on the economics of equality less obvious. With Mary Lou and Pearse (and other potential leaders – let’s not assume this will be a two-horse race), it’s the other way round: their commitment to equality economics and social justice is clear; their commitment to a reunited Ireland is less obvious.
Recent remarks by Martin McGuinness have confirmed that he and Gerry Adams are looking at the question of who comes after them. Given the shambles the SDLP was plunged into when John Hume withdrew from politics, you’d imagine Adams and McGuinness are determined that nothing similar will happen with Sinn Féin. And stand by for some ramping up of reunification credentials by those with an eye to succeeding them.